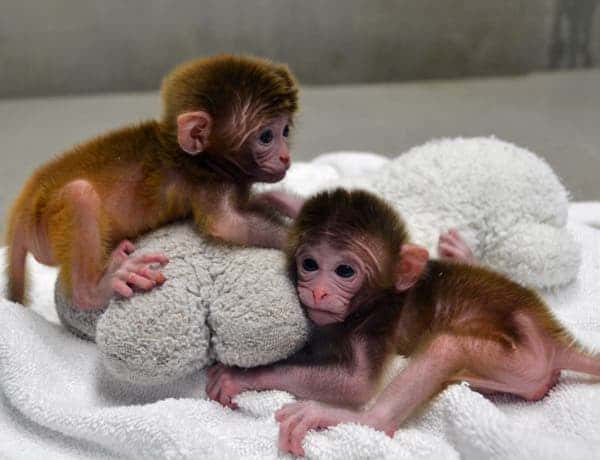 The rhesus monkey twins, Roku and Hex (“six” in Japanesse and Greek respectively, since they were made from six distinct genetic entities), in sound health posing for the researchers. (c) OHSU

In Greek mythology, the chimera is a fire breathing beast composed of several animal parts (lion body, snake-head tail, a goat head hanging from its back and so on), which has spurred the imagination of man for thousands of years. Though it is fairly clear that such an abomination never existed, apart from the infinite recesses of human imagination, scientist at the Oregon National Primate Research Centre have successfully bred, not one, but three chimera monkeys – each of them made up of tissue that came from up to six distinct genetic entities.

Of course, the scientists worked only with a single species, so that means no monkeys with rhino horns or giraffe ears. The three animals, two twins and a singleton, were bred after several different rhesus monkey embryos were stuck together in their early stage of development. These were later implanted in five female rhesus monkeys, all of which became pregnant. Thus, the chimera monkeys had tissue made up of cells that came from each of the contributing embryo.

“The cells never fuse, but they stay together and work together to form tissues and organs,” said Shoukhrat Mitalipov, who led the research. “The possibilities for science are enormous.”

This isn’t the first time a chimeric animal has been bred, far from it. The first successful attempts of this kind were made in the 1960s when one by one scientists managed to give life in the lab to chimeric rats, sheep, rabbits or cattle.  In time, this kind of research proved to be invaluable for scientists’ ongoing stem cell research efforts. Understanding how during embryonic development one particular cell develops into a particular tissue in the organism is crucial.

“If we want to move stem cell therapies from the lab to clinics and from the mouse to humans, we need to understand what these primate cells can and can’t do. We need to study them in humans, including human embryos,” said Mitalipov.