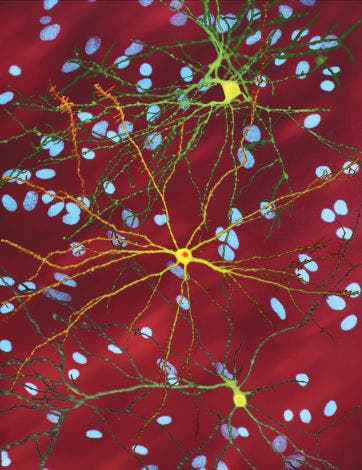 Pictured: several neurons (yellow) that have a large central core with up to two dozen tendrils branching out of them. In Huntington’s disease, the core of the neuron in the foreground contains an orange blob about a quarter of its diameter. Credit: Wikipedia

Keeping this in mind, she started looking for diseases involving similar RNA mechanisms that also correspond with lower rates of cancer. Murmann and her team found that Huntington’s disease (HD) patients have up to 80 percent less cancer than the general population.

HD is caused by too many repeating RNA sequences in one gene, called Hungtin, present in every cell. These siRNAs attack genes that are critical for survival. Nervous cells had been considered the most vulnerable to this cellular attack, but this study shows that cancerous cells are even more vulnerable to siRNAs.

“I thought maybe there is a situation where this kill switch is overactive in certain people, and where it could cause loss of tissues,” says first author on the study Andrea Murmann in a press release. “These patients would not only have a disease with an RNA component, but they also had to have less cancer.”

The RNA molecules found in HD were very similar to the ones that the team had discovered in their previous research, so they thought: Why not test them and see if they have the same effect?

Researchers developed nanoparticles that were able to transport cancer-killing siRNAs through the bodies of mice with cancer. The results showed that tumors stopped growing in a huge variety of different cancer cell lines, such as ovarian, breast, prostate, liver, brain, lung, skin and colon cancer cells. Also, the tumors did not develop resistance to this form of cancer treatment.

“This molecule is a super assassin against all tumor cells,” say senior author Marcus Peter. “We’ve never seen anything this powerful.”

Now, researchers have to find out how to refine the nanoparticles, making them more target-accurate and more stable and storable. Of course, there is also the matter of neuron toxicity to be tackled by the scientists, although they believe that a short-term treatment with siRNAs would not affect brain tissue, mainly because in HD the patients are exposed to increased levels of siRNAs several decades until clinical signs show up. Usually, HD patients develop the first symptoms around the age of 40.

“We believe a short-term treatment cancer therapy for a few weeks might be possible, where we could treat a patient to kill the cancer cells without causing the neurological issues that Huntington’s patients suffer from,” says Marcus Peter.

The research was supported in part by funding from the National Institutes of Health/National Cancer Institute and The Northwestern University Feinberg School of Medicine Developmental Therapeutic Institute and was published in the journal EMBO Reports.