Just like we have bacteria, dangerous microscopic organisms that can cause serious problems, bacteria have bacteriophages (or phages) — viruses that prey on them. Phages are so devastating to bacteria that they’re estimated to kill about half of the bacteria in the world’s oceans every two days. Now, researchers have uncovered a surprising mechanism through which some bacteria defend themselves from phages: by stealing genetic material.

“This study shows bacteria’s ability to transform an implement of war into a tool to create life,” said the study’s lead author, Amelia Randich. “It’s like watching evolution beat a sword into plowshare.”

Like human viruses, bacteriophages can’t reproduce by themselves, so they inject their own genetic material into cells, hijacking their victims to copy their own genes, thereby producing new virus particles that break open and kill the cells. This process is called lysis, and the toxic enzymes that produce cell death are called lysins. However, a family of bacteria called Caulobacterales seem to have developed an antidote.

The key to the antidote is a gene called SpmX, commonly known as “Spam X.” Caulobacterales are a bacterial order whose members grow long appendages called stalks. Spam X appears where cell stalks grow, assigning proteins to support the development of the stalk. However, the gene appears to have originated in bacteriophages and was originally used to destroy bacterial cell walls. 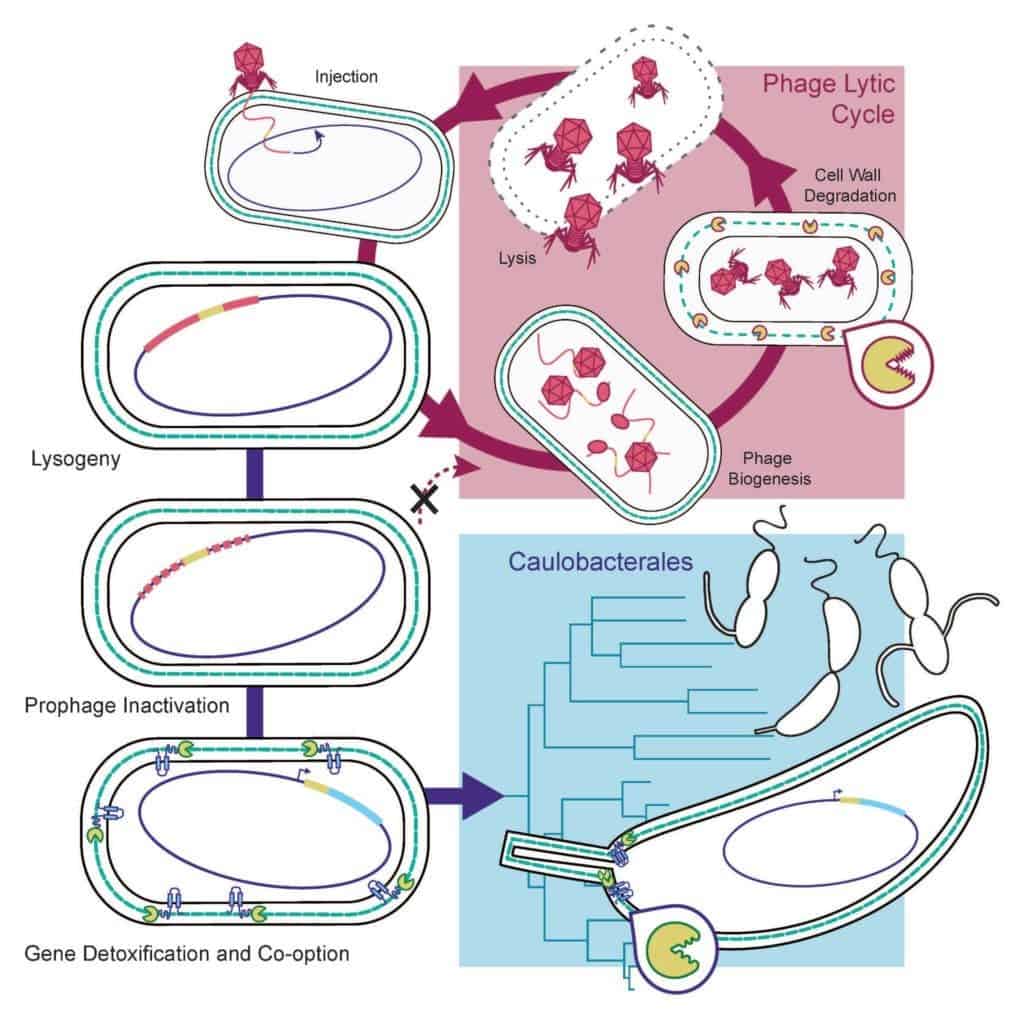 The red section shows the process by which viruses kill bacterial cells to produce new virus particles with help from an enzyme, represented as a ‘Pac-Man’ with razor-sharp teeth. In Caulobacterales, the ‘teeth’ are now blunt, no longer able to kill bacteria, instead helping grow new stalks through the process shown in blue. Credit: Amelia Randich, Indiana University.

Using X-ray crystallography to create 3-D models of SpmX and related protein structures, researchers found remarkable similarities between SpmX and the gene producing the viral lysins. But instead of cracking open cells in Caulobacter, they seem to help guide SpmX to the future position of the stalk.

“Even though it was very, very similar to phage genes, we found a specific mutation in Caulobacter—in the area of the protein used to cut through the bacterial cell wall—that reduced its efficiency,” Brun said.

“Because the sequence was so closely related to the genes in phage, you would expect it to have the same function: to cut the cell wall,” he added. “But instead its activity was reduced to the point where it no longer killed the bacteria. It’s quite remarkable.”

The similarities are too large to be a coincidence, and genetic analysis suggests that bacteria developed and tweaked this gene around 1 billion years in the past. More importantly for us, it could be a way to keep viral infections at bay, or even to use bacteria for innovative uses, such as delivering compounds such as insulin or antibiotics.

The study has been published in Current Biology.