Dutch researchers from the Erasmus University Medical Center boast promising results with a new drug meant to reverse the effects of aging.Tests performed on mice suggests the drug is effective at restoring stamina, coat of fur, and even some organ function. 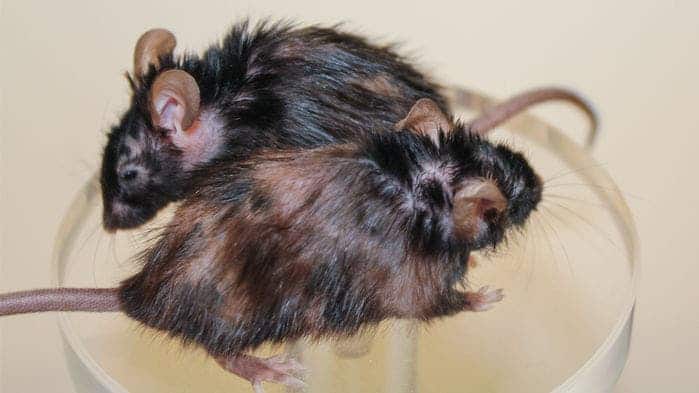 Shown here are two aged rats. The one in the back received a peptide treatment which destroys senescent cells while the one in the front didn’t. The latter mouse is in poor health as evidenced by the missing fur. Credit: Peter de Keizer

As we age, some cells begin to change their internal structure and ability to keep homeostasis. One component of aging is the damage caused by senescent cells, which are cells which have stopped dividing but which have not destroyed themselves as they should have following programmed cell death. Senescent cells secrete abnormally large amounts of some proteins that are harmful to their neighbours, stimulating excessive growth and degrading normal tissue architecture. These cells have also been associated with cancer and release chemicals that cause inflammation.

What the drug does is it effectively flushes out senescent cells out of the body by disrupting the chemical balance within them. The team led by Dr Peter de Keizer had previously made three fail attempts but were lucky the fourth time around, they report in the journal Cell.

The drug was injected into mice which were genetically modified to age very rapidly as well as in mice that were artificially aged through chemotherapy. Their equivalent age in human years was 90 and the drug was administered three times a week for nearly a year. At the end of the experiments, the rejuvenating effect of the therapy was clear. Age-related loss of fur, poor kidney function, and frailty became reversed.There were no apparent side effects, but that doesn’t mean they’re totally absent. “Mice don’t talk,” Keizer said which is why his team is planning human trials.

The drug itself is a peptide which took nearly four years of trial and error to reach its final form. It works by blocking the ability of a protein implicated in senescence, FOXO4, to tell another protein, p53, not to cause the cell to self-destruct. By interfering with this cross-talk, the senescent cells essentially perform suicide. “Only in senescent cells does this peptide cause cell death,” Kaizer said.

Improvements showed at different times over the course of the treatment. Aged mice that presented patches of missing fur began to grow their coats back after ten days. Fitness levels started to improve after three weeks as tests showed older mice could run twice as far as their counterparts who did not receive the treatment. A month later, the old mice showed improvements in healthy kidney function.

Senescent cells have some beneficial roles in the body. Killing off too many of these cells can trigger cascading complications that can lead to tumour formation. Senescent cells also foster wound healing. With this in mind, a similar treatment meant for humans has to be very well refined else the therapy could end up doing more harm than good. So, it seems very likely that a ‘magic’ age-reversal pill bought over the counter is decades away but it’s exciting to hear about all of these developments now.