Doctors Without Borders has a strong message for giant pharma company Pfizer: we don’t want your charity. This is much more than just a petty rebuke based on principle – at the heart of this refusal lies a fundamental crisis in modern healthcare. 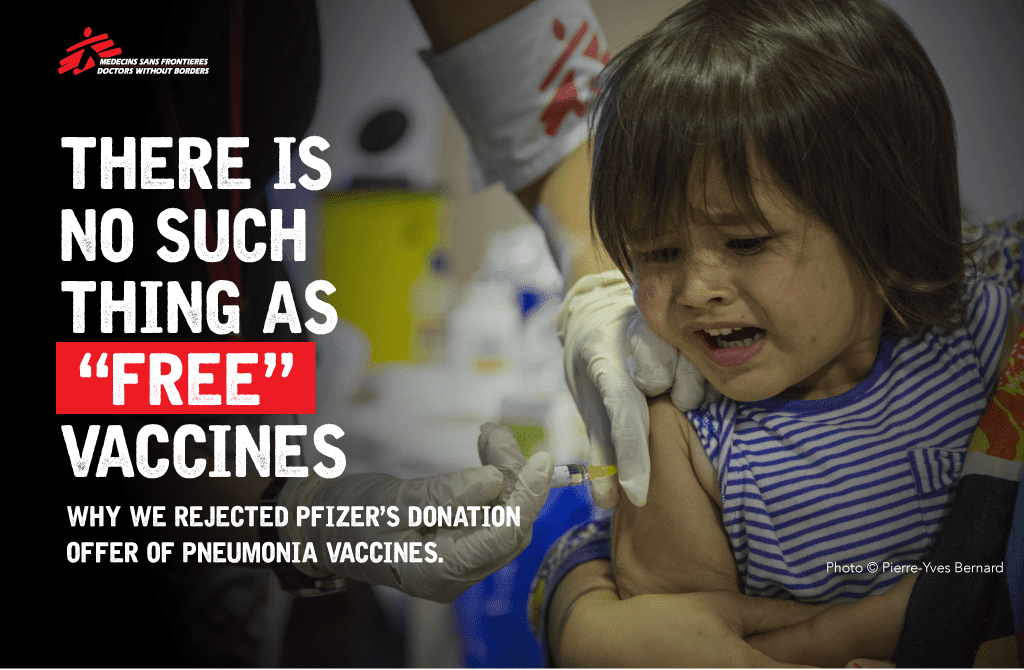 Image via Doctors Without Borders

As a medical organization, DWB aims to save lives. A million vaccines for pneumonia could save a lot, so why then is the organization refusing the help?

Pneumonia is the most dangerous disease for children, killing about 1.4 million kids every year. The process is often the result of one bacterium, Streptococcus pneumoniae. The disease reaches the lungs and when the body tries to fight it, it produces puss which fills the alveoli, suffocating the children. The body’s immune system is basically responsible for many of the fatalities.

Decades ago medical researchers found a way to expose the kids’ body to the benign parts of the bacteria, teaching their immune systems to destroy it without the risky immune response. In other words, they developed a vaccine. Pfizer’s modern iteration of that vaccine is called  the PVC 13.

The Pneumococcal conjugate vaccine (PCV13 or Prevnar 13) is recommended to protect infants and toddlers worldwide and it’s really effective. Since its introduction in the US, cases of severe pneumonia in children have dropped by 88 percent. Similar results have been reported in other developed countries. But in some parts of the world, children don’t have access to this (or any other) vaccine. As a result, pneumonia is commonly ravaging throughout sub-Saharan Africa and southeast Asia.

In this context, the refusal seems nonsensical. DWB is basically condemning children instead of saving them. Pfizer agrees. In an email to James Hablin from the Atlantic a corporate spokesperson said that Pfizer is dedicated to making vaccines available to as many people as possible. The spokesperson also added that the Doctors Without Borders decision “defies logic.” 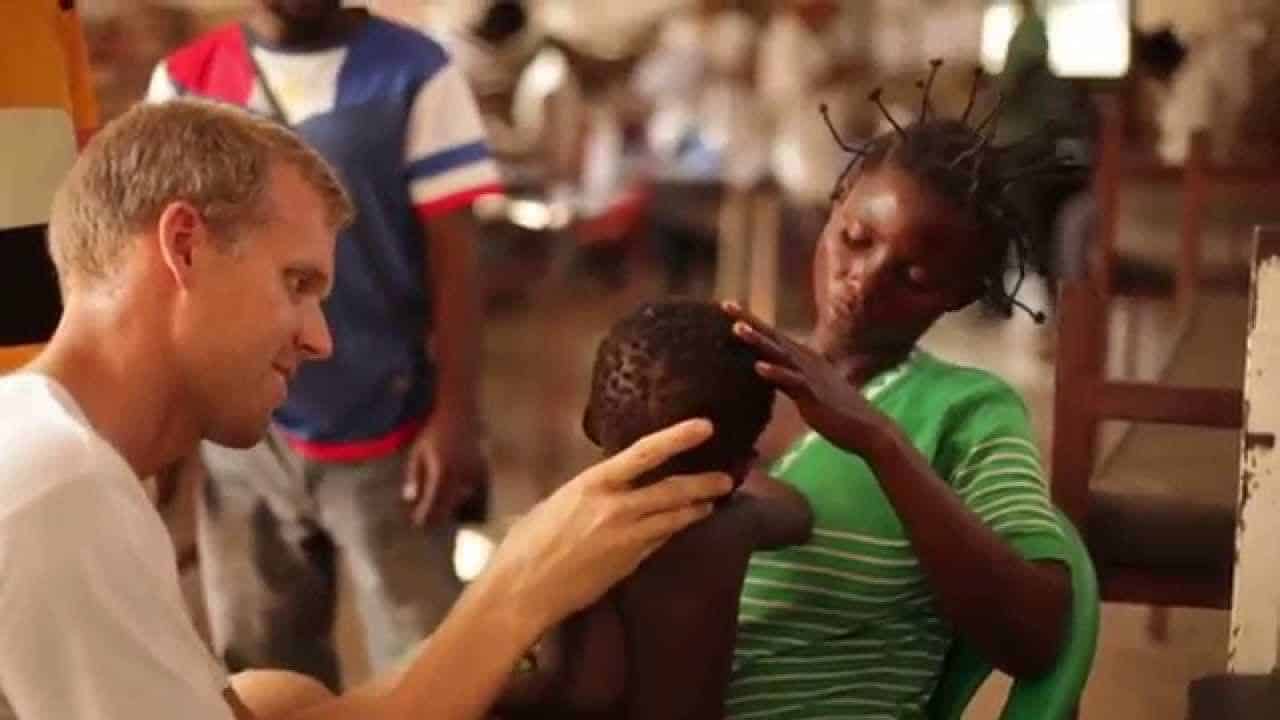 Free is not always better, Doctors Without Borders argues.

Of course, the humanitarian organization sees donations as highly valuable. Yet this time, they argue, it’s simply not worth it. For starters, these donations come with highly specific caveats regarding where the vaccines will be administered and who can receive them. This could actually slow down vaccination campaigns and make them less efficient.

Secondly, donations like this are basically a big PR umbrella for corporations. They can be used as justification for further, less laudable measures and can paint a completely misleading image for the company.

“By giving the pneumonia vaccine away for free, pharmaceutical corporations can use this as justification for why prices remain high for others, including other humanitarian organizations and developing countries that also can’t afford the vaccine. Countries, which continue to voice their frustration at being unable to afford new and costly vaccines such as [the pneumonia vaccine], need lower prices as well to protect children’s health,” Doctors Without Borders’ U.S. executive director Jason Cone wrote.

But the main problem is the price of the vaccine. Pfizer produces the vaccine and holds several patents – not only for the final product but also the process through which the vaccine is made. This basically means that no one can make a similar vaccine – and when you hold the patent for life-saving medicine, you make a lot of money. Last year Pfizer returned $13.1 billion to its shareholders and according to The Atlantic, the vaccine alone generated $6.245 billion in revenue during the last year.

Free is not always better

It may seem counterintuitive at first, but free is not always better – and in the long run, accepting the donation could have cost more lives than it would have saved. Donations like this, Cone argues, “undermine long-term efforts to increase access to affordable vaccines and medicines.” They remove the incentive for new vaccine-creating companies to enter the market and basically act as a tool to keep the monopoly and ensure the further generation of profits while keeping the price high.

Pfizer, of course, has every interest to keep this price high. They’re also quite secretive about the data.

“The companies really operate on opacity of price data,” explained Kate Elder, the Vaccines Policy Advisor at DWB. People in the dark have no bargaining power. (Not unlike office workers negotiating salaries.)

It’s not even clear how much a single dose of vaccine costs – but the price tag is quite hefty. A previous study from DWB determined the cost of a single dose (the vaccine requires four doses to complete) costs $63.70 in Morocco and $67.30 in Tunisia, going for a whopping $136 in the US.  The determination of this cost was quite complicated because not only does Pfizer not make the price public, but according to Elder, refused to give DWB a proper quote – and this is where it gets really interesting.

DWB didn’t want free vaccines, they just wanted cheap vaccines. In 2009, Pfizer agreed to sell the vaccine to the Global Alliance for Vaccines and Immunization (GAVI), an organization that purchases vaccines in bulk on behalf of poor countries, for $9.15 per course. That’s exactly what DWB wanted, but they never got that deal. They can’t buy cheap vaccines and the donation would just be an imperfect fix, a patch to stem the bleeding without fixing the underlying problem.

A tough, but likely correct decision

Of course, rejecting the donation was not an easy thing, but it could turn out to be the good decision.

The World Health Organization (WHO), and other leading global health organizations such as UNICEF and Gavi, have clear recommendations against donation offers from pharmaceutical corporations.

“Donations of medical products, such as vaccines and drugs, may appear to be good ‘quick fixes,’ but they are not the answer to increasingly high vaccine prices charged by pharmaceutical giants like Pfizer and GSK.”

Ultimately, this is the big problem. Some companies have a monopoly on life-saving medicine, and they keep it at a very high price. Sometimes, as in the Mylan case, this goes completely overboard. But other times, as with this pneumonia vaccine, the situation is not so clear. So while the donation would benefit people immediately, in the long run, it could cause even more problems. Unfortunately, many vaccines are still made by only one or two manufacturers and this is what drives the prices so high. If we want the price of medicine to go down then we need a real competition, and while donations do help and they can make a difference, they’re not the sustainable solution we’re hoping for.

8 thoughts on “Doctors Without Borders just refused a 1-million-vaccine donation from Pfizer, and this is probably a good thing”