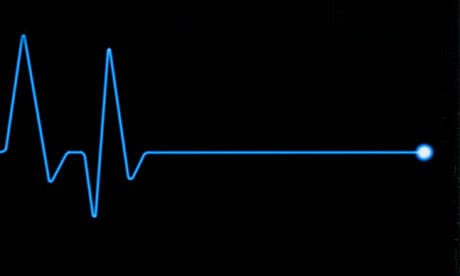 Studying death in humans has always been precarious. I mean, it’s not like anyone would volunteer to be live dissected as they slowly die, and even if someone would agree to such a procedure, most likely it would not be allowed. Not in any western hospital anyway. Luckily, death is such a common, as in inevitable, occurrence for all living beings that most animals models are good enough to offer insights into the analogous effects of death in humans as well.

With this in mind, a new study claims that death in  organisms, including humans, spreads like a wave from cell to cell until the whole individual is dead. What interesting enough is that the scientists from the Institute of Health Aging at University College London who made the study believe that this biochemical process may be halted and death may be delayed.

To study how death spreads throughout the body, the researchers chose to study worms, which oddly or ironically enough are considered immortal in the face of aging. Anyway, they’ve been proven to be very mortal in the present research and quite valuable too. A neat feature of worms is that when they die the underlying process that follows can be easily seen through magnification. As the organism dies, a  fluorescent blue light is released caused by necrosis, namely a molecule called anthranillic acid.  Apparently, this is dependent upon calcium signaling.

“We’ve identified a chemical pathway of self-destruction that propagates cell death in worms, which we see as this glowing blue fluorescence traveling through the body. It’s like a blue grim reaper, tracking death as it spreads throughout the organism until all life is extinguished,” David Gems from the Institute of Health Aging at University College London.

What this implies is that death doesn’t occur in the entire organism in an instant, but gradually propagates through out the entire body triggered by the death of vital individual cells, such as the case during a stressful event like a car accident or gunshot. This damage also happens, at a much slower pace albeit, when the individual ages.

Aged individuals are beyond hope and repair, according to the researchers, however if their trials on the worms offer in indications it’s that death could be “fooled” by stopping the calcium signaling biochemical spread of death under other non-aging-related circumstances.

“We found that when we blocked this pathway, we could delay death induced by a stress such as infection, but we couldn’t slow death from old-age,” Gems said. “This suggests that aging causes death by a number of processes acting in parallel.”

He continued that “the findings cast doubt on the theory that aging is simply a consequence of an accumulation of molecular damage. We need to focus on the biological events that occur during aging and death to properly understand how we might be able to interrupt these processes.”

Findings were detailed in a paper published in the journal PLoS Biology.