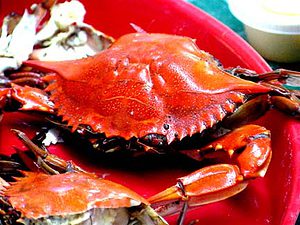 A new study from researchers at Queen’s University Belfast, UK, found that indeed shellfish, like crabs or lobsters that are typically cooked alive in horrid conditions, feel pain as well. The findings raise significant ethical discussions, warning the food and fish industry of its ill ways of killing live seafood.

“On a philosophical point, it is impossible to demonstrate absolutely that an animal experiences pain,” researcher Bob Elwood of the Queen’s School of Biological Sciences, was quoted as saying in a press release. “However, various criteria have been suggested regarding what we would expect if pain were to be experienced. The research at Queen’s has tested those criteria and the data is consistent with the idea of pain. Thus, we conclude that there is a strong probability of pain and the need to consider the welfare of these animals.”

Crabs are typically boiled alive in a tank, however since the crustaceans have a very primitive central nervous system, it has always been thought that they do not experience pain. The panic and struggle crabs experience when dived in boiled water has always been attributed to a reflex behavior, not at all to pain-induced self preservation.

“In contrast to mammals, crustaceans are given little or no protection as the presumption is that they cannot experience pain. Our research suggests otherwise,” Professor Elwood said.

“More consideration of the treatment of these animals is needed as a potentially very large problem is being ignored.”

To distinguish between reflex and actual pain the researchers devised a simple, but ingenious experiment. The scientists took 90 crabs and put them in a tank with two dark shelters. After most crabs selected their shelter of choice, one of the shelters was electrically charged. The scientists pulled out the crabs from the tank and after some rest inserted them back. Most stuck with what they knew best, returning to the shelter they had chosen first time around, where those that had been shocked on first choice again experienced a shock. When introduced to the tank for the third time, however, the vast majority of shocked crabs now went to the alternative safe shelter. Those not shocked continued to use their preferred shelter.

“Having experienced two rounds of shocks the crabs learned to avoid the shelter where they received the shock,” Professor Elwood said.

“They were willing to give up their hideaway in order to avoid the source of their probable pain.”

With this in mind, crabs, lobsters and other shellfish and crustaceans may experience the world more like us than we might have thought. Findings were reported in a paper published in the Journal of Experimental Biology.

One thought on “Crabs and other shellfish feel pain. Opens ethical discussion”