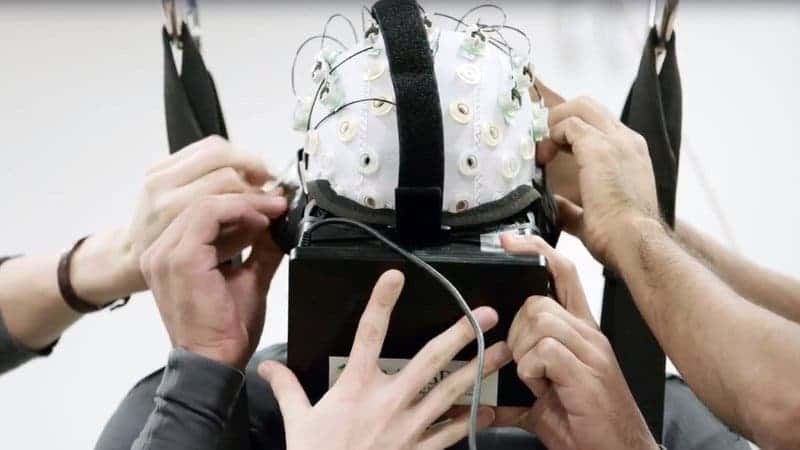 One of the patients involved in the “Walk Again Project” straps a VR headset and EEG cap. This therapy helped many of the patients regain part of their senses, although they used to be completely paralyzed. Credit: Nature

The degree of recovery varied on a case by case basis, but overall all the patients, who all but one were diagnosed as completely paralyzed following spinal cord injury, saw a significant improvement compared to their previous condition.

In some cases, the transformations were amazing. One patient reported she could now leave the house and even drive a car, although aided by crutches. Another managed to conceive and deliver a child, whose contractions she was able to feel. Four of the patients were classified from “completely paralyzed” to “incomplete paraplegia”, a much milder form spinal injury. Another patient was able to recover visceral functions and can now tell when she needs to go to the toilet.

These amazing results which took everyone by surprise, including the researchers at the Alberto Santos Dumont Association neurorehabilitation laboratory in São Paulo, were the fruit of a 12-month-long intensive training program. 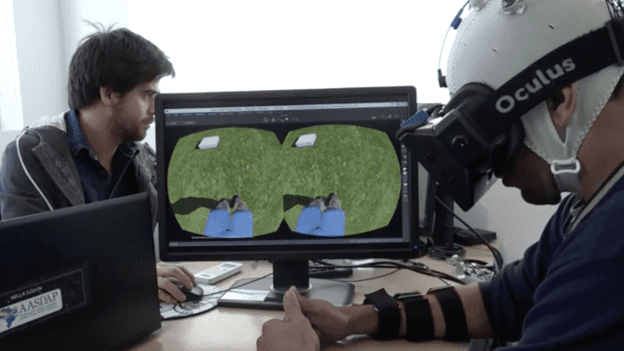 In the first phase, patients were fitted with an Oculus Rift virtual reality headset, an EEG cap which measured brain activity and a tactile feedback device attached to the forearm responsible for emulating feelings of touch in the virtual environment.

Immersed in the virtual environment, the patient were tasked with moving a soccer player avatar about a stadium — all by thought alone. This was to activate those areas of the brain, like the motor cortex, involved in processing movement. Many patients were paralyzed for a very long time (one for more than a decade), so it was imperative to stimulate these brain connections first using this VR illusion of walking with their own legs. 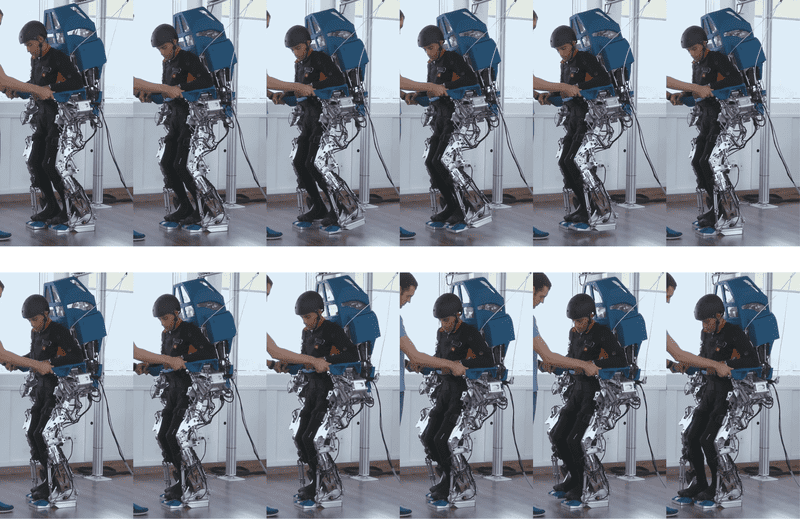 Patients controlled an exoskeleton’s legs on a treadmill using their thoughts. Credit: AASDAP

After a couple of rounds of VR, the patients were strapped to an exoskeleton which they used to walk on a treadmill. The exoskeleton’s legs were brain-controlled similarly to the previous task using brain waves transmitted by a non-invasive electroencephalogram cap.

Initially, the aim of the program was to see whether patients could reliably control the exoskeleton by directing it with their minds. Soon enough they learned that the patients could regain feeling and control of their own muscles following this therapy. From the total absence of touch to being able to sense pain, pressure or vibration. Men reported having erections again.

“If you’re clinically diagnosed as having a complete lesion, if after 18 months you don’t show any improvement, the chance of regaining any motor or sensory capability below the level of the lesion goes down to zero,” said Miguel Nicolelis of Duke University in the US, who led the study at the AASDAP Neurorehabilitation Laboratory in Sâo Paulo, Brazil.

Nicolelis and colleagues not only proved that brain connections involved in movement can be activated, but they also showed that the paralyzed could regain at least part of their senses, as reported in Scientific Reports.

“If you touched them with a pin, or a brush… they would feel something that they didn’t experience before,” Prof Nicolelis told the BBC.

“They also experienced a significant visceral improvement. This translated into better bowel and bladder functions – which are very critical for these patients.”

There are roughly 25 million people worldwide with severe spinal injuries, and this research is sure to shine a glimmer of hope for many –and this sort of therapy isn’t alone.

Previously, scientists helped patients with spinal cord injuries regain movement by zapping their spines with electricity; another patient regained voluntary finger movement — a first. For those missing limbs, there are also options. One man could feel physical sensations through a prosthetic hand directly connected to the brain. Science is on its way, it seems, to turn disability from permanent to temporary.