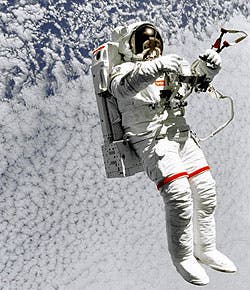 After the International Space Station was completed, scientists noticed that exposure to weightlessness may have some deleterious effects on human health. The human body is too adjusted to the gravitational conditions on Earth, so extended periods of weightlessness can cause various physiological systems to change and atrophy.

Astronauts on-board the International Space Station battle nausea and vertigo, as well as daily headaches. However, their biggest problem is muscle atrophy, forcing them to exercise constantly to diminish some of the effects.

Another serious weightlessness physiological symptom that is often overlooked is vision deterioration. Previous NASA surveys that interviewed over 300 astronauts post-prolonged space missions (more than six months) revealed that half of all astronauts involved in orbital missions since 1989 complained about changes in near- and far-sightedness. One of 4 astronauts who flew missions of less than 6 months also reported eye problems.

Older crew members, aged over 40, are more predisposed to vision deficiencies, which first start after around six weeks of weightlessness exposure, and go on to continue even months after returning back to Earth. NASA has been aware of this problem for decades now, and for the past few years, it has even issued reading glasses, along with sunglasses, to all of the astronauts that serve long-term space missions.

Recently, the National Aeronautics and Space Administration performed a more in-depth examination of this serious hazard, as the agency conducted a clinical evaluation that involved studying seven astronauts, all of whom were aged around 50 and had spent at least six continuous months in space.

Five of the 7 astronauts in the study complained of lost visual acuity beginning several months into their long-duration flights, and all 7 showed evidence of pathological processes undercutting their vision after their missions. Several abnormalities have been revealed, including the flattening of the back of the eyeball, folds in the vascular tissue behind the retina, and excess fluid around and presumed swelling of the optic nerve.

“If the choroid gets damaged, you may get insufficient or altered blood flow to the photoreceptors, leading to detachment of the retina, leakage of fluid under the retina, or damage to the visual cells,” said Michael F. Marmor, MD, professor of ophthalmology at the Stanford University School of Medicine in California, who was not involved with the study.

The results are currently impacting plans for long-duration manned space voyages, such as a trip to Mars, explained the team including ophthalmologists Dr. Thomas H Mader, of Alaska Native Medical Center, and Dr. Andrew G Lee, of The Methodist Hospital, in Houston, Texas. Their findings have been reported in the October issue of Ophthalmology.

NASA is constantly developing technology, aided by data provided by studies such as the present one, in order to counter the various worrisome effects zero gravity has on the human body. Regarding vision deficiencies, in particular, astronauts are now required to routinely undergo pre- and post-flight magnetic resonance imaging of their head and eyes, along with dilated fundus exams with photography of the macula and optic nerve, to provide intraocular pressures measurements.

“It is just a question of getting more data,” Dr. Mader said. “Recent long-duration missions have made these changes more pronounced, and improved technologies have served to better analyze these findings.”

Until artificial gravity can finally become functional, astronauts will have to pay for the best views in their lives.