We’re only in the early days of 3-D printing, but even now the breakthroughs made using such technology are most impressive like the genuine possibility of printing spare parts in space for the ISS, creating objects of great details on the nanoscale or even artificial muscles made using a 3-D printer. What’s fabulous though is that 3-D printing is developing at an accelerate pace. One day 3-D printers might actually be used to build working human organs saving millions of lives, maybe in a manner similar to how some SciFi movies depict tissue reconstruction. 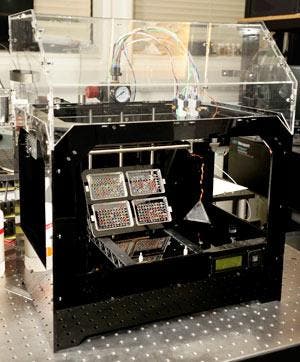 The latter idea, though still very far fetched, recently had its foundation laid at the Scotland’s Heriot-Watt University and Roslin Cellab, where researchers there developed a novel technique which allows stem cells to be printed in blobs. Previously, researchers were able to engineer tissue samples combining artificial scaffold-like structures and animal cells, this is a method that is extremely laborious, however. Rather than manually positioning individual cells, using a 3-D printer  one can uniformly and accurately position them to form a desired tissue.

Stem cells, while extremely appealing for their pluripotent ability to morph into any kind of cell, are very hard to print since they are very sensitive to manipulation. The Scottish scientists tackled this issue by developing a sophisticated method that deposit droplets of a consistent size containing living cells through a valve-based printer nozzle that gently dispenses the cells.

The printing system is driven by pneumatic pressure and controlled by the opening and closing of a microvalve. Thus, one can vary the droplet size and rate of dispensing simply by changing the  nozzle diameter, the inlet air pressure or the opening time of the valve.

Still, though these first steps looks extremely promising, do not grow too excited. We are still decades away from developing a system capable of printing organs in 3-D. Organs, unlike muscles for instance, have a highly complex and sophisticated vascular structure that caries nutrients and exits waste, impossible to replicate by today’s technology. Vascular tissue engineering research is already on the works, however, and this aspect too might be taken care of. Make no mistake, it might not happen during our life time.

The method was reported in the journal Biofabrication.