The past couple of months have been really tense for the people who are often times labeled as coming from ‘uncontacted’ tribes. The truth of is most of these tribes are often times intruded upon by neighboring communities and, worse and most dangerous of all, illegal loggers and drug traffickers. As such, tribesmen have come out in the open, forced upon by ever crowded forests, and this has caused a stir, especially in Peru. The latest incident was reported in early October when three small indigenous villages along Peru’s remote Alto Purús river were raided. This was not a burn and pillage raid, mind you. The inhabitants were away for voting, but upon their return they found quite few of their possessions had been stolen, including things like shortwave radios or solar panels – which are useless to the tribesmen. The villagers tracked the thieves only to find their  goods littered across campsites.

Amazonian tribes come out in the open 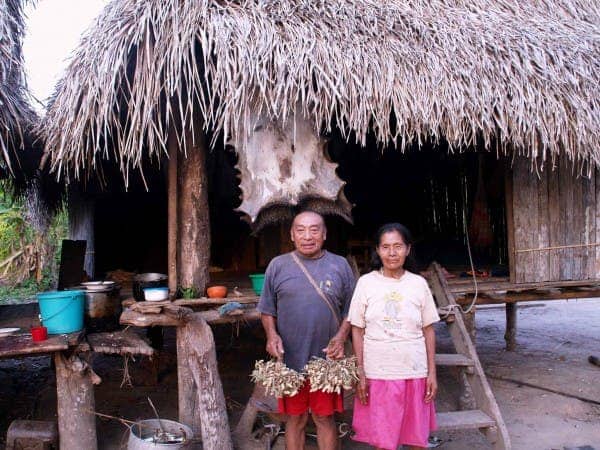 Inhabitants of the Peruvian Amazon village of Colombiana, who were recently raided by a neighboring Amazonian tribe. Photo: C. FAGAN, UPPER AMAZON CONSERVANCY

Thefts made by Amazonian tribesmen aren’t unheard of, but while previously only things like machetes or food were stolen, this latest incident risks degenerating into a conflict of retaliation. Isolated villages such as these ones receive their supplies by plane and goods end up costing a lot of money.

“To lose those big pots and pans and shotguns is like someone coming and stealing your car,” Chris Fagan, executive director of the Upper Amazon Conservancy, a nongovernmental organization headquartered in Jackson, Wyoming, that aims to protect the Amazon headwaters and its indigenous peoples. “We are seeing a dramatic change in behavior of these [isolated] people throughout the Peru-Brazil border,” he added.

Tribe and village not to blame. The fault lies elsewhere

Indeed, the patterns are changing, but what made these  tribespeople – usually quiet and reclusive – commit these acts? This July, I wrote an article about an uncontacted Amazonian tribe which was threatened  by criminals operating illegal narcotrafficking whose routes apparently pass through the tribe’s territory. Witnesses, assisted by an interpreter, reported that non-native invaders had shot many of their old people and razed at least some of their homes. Worst of all, however, researchers from Brazil’s Indian affairs department (FUNAI) report that some of these tribespeople were infected with influenza. The flu might not be that threatening to you or me, but for those who had never had it, nor their families for generations past for that matter, it could spell death and disaster. Luckily, they were vaccinated, but apparently the contacted people slipped back to their village shortly after receiving their shots and the researchers haven’t heard anything from them since.

Illegal logging in the area also has its blame. Besides log routes passing through their territory, the tribes’ lands are getting thinner. There’s less game, food is scarcer and natives are forced to share resources with other tribes. Raiding between tribes has intensified as their lands are getting ever crowded. Some loggers have   penetrated to within 30 kilometers of a village inhabited by one isolated tribe.

With all this put into context, one can hardly blame the tribesmen. The local villagers, like those who had their valuable goods stolen, bear no blame either. Each would like to live in peace, but these recent incidents might end up in a crackdown. Villagers are entitled to defend themselves and their possessions, and something must be done soon. An obvious first step is for the Peruvian government to step in an compensate the villagers. This will defuse the situation a bit, but is far from being a sustainable solution. The whole problem needs to be analyzed from more than just one angle – studies need to be performed, and measures need to be taken.

“Isolated people didn’t use to attack these communities, so it is important to find out what is bothering them,” says Beatriz Huertas Castillo, an independent anthropologist in Lima who has been monitoring the welfare of isolated tribes in the Amazon borderlands.