We all know that our oceans are polluted, and one of the biggest problems is plastic pollution. But few people really realize just how much plastic is in the waters – a new study estimates that there are at least 5.25 trillion pieces which weigh an estimated 269,000 tonnes. The real number however may be even much larger than that.

There are at least trillions of pieces of plastic in our ocean. Image via NOAA.

Plastic is one of the biggest polluters – not only does it choking and killing our wildlife, but it’s also disrupting the food chain, and ultimately ending up in our plates. In the Pacific Ocean alone, there is an “island” of plastic about the size of France, and a previous study estimated that the Arctic ice also holds trillions of pieces of plastic. But until now, there was no total estimate on just how much plastic is in our oceans; now, a team of researchers from the not-for-profit 5 Gyres Institute has done just that – they’ve quantified how much plastic is in the oceans.

This was an international research effort that lasted 6 years and involved two-dozen expeditions in five “subtropical gyres,” large, swirling zones in the South Pacific, Indian Ocean, and elsewhere. After all this work, they came to the conclusion that the absolute minimum, the lowest and most optimistic number of plastic pieces in the oceans is 5.25 trillion. It’s a pretty depressing figure, but researchers say that it’s smaller than what they were expecting. But they also say that the real number is almost surely much larger than that. Initial models predicted 100 times more pieces.

Not all plastic floats, as scientists explain:

There is also another problem, with wildlife eating the plastic and then eliminating it in “fecal pellets” that sink into lower waters where it’s harder to detect. For these reasons, they suspect that there is a lot of plastic on the bottom of oceans as well as on the surface. Also, they report that not all areas of the world are equally polluted, but wherever plastic pops up, the wildlife suffers. 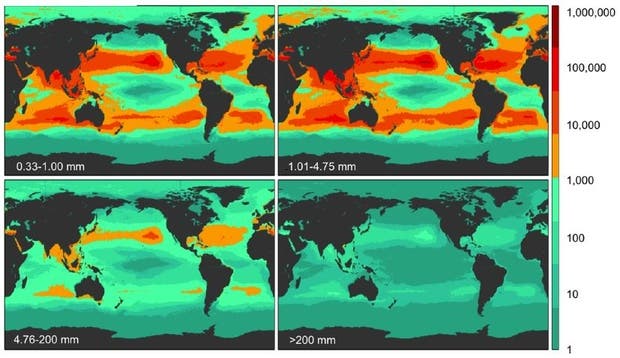 Plastic distribution throughout the world. Eriksen et al./PLOS ONE

“Our findings show that the garbage patches in the middle of the five subtropical gyres are not the final resting places for the world’s floating plastic trash,” said Marcus Eriksen, lead researcher in a press release. “The endgame for microplastic is interactions with entire ocean ecosystems.”

A paper published earlier this year in the Proceedings of the National Academy of Sciences also came up with a similar result – they were expecting to find much more plastic, but surprisingly, a lot of the plastic was “missing in action”. But regardless of what’s happening to the “missing plastic”, one thing is clear.

4 thoughts on “Full extent of plastic in world’s oceans quantified: over 5 trillions of pieces of plastic”