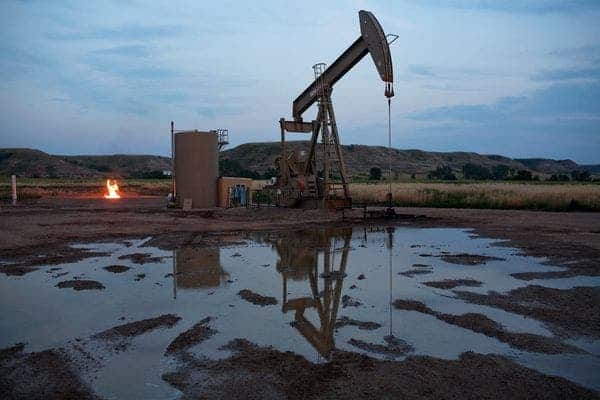 Researchers at University of Texas at Arlington conducted tests on more than 100 water wells in Texas and found 30% of these contained ‘alarming’ amounts of arsenic, enough to be considered carcinogenic and seriously threatening human health. These contaminated wells were found in the vicinity of known fracking sites and prior to drilling these were found to be free of arsenic or at least far from the concentrations we’re seeing now. There is an ongoing debate whether or not fracking can contaminate potable water sources and this latest research suggests that indeed this can happen, albeit the evidence is indirect. The findings appeared in the journal Environmental Science and Technology [cite]10.1021/es4011724[/cite].

Hydraulic fracturing or fracking is a now a popular drilling method which involves injecting a liquid mixture of sand, water and other chemicals (some of which are carcinogenic, while others are classified – we know very little about their toxicity other than what drilling companies tell us: that they’re totally safe) at very high pressure with the aim of cracking or ‘fracturing’ the rock deposits miles under the surface to make it easier to extract natural gas or oil.

The team comprised of 11 biochemists found twenty-nine groundwater wells within 1.8 miles of active natural gas drilling whose water contained unusually high levels of heavy metals, including arsenic which past a certain concentration can be extremely dangerous. Indeed, the water from the wells contained arsenic well past the the limit considered safe by the U.S. Environmental Protection Agency.

University of Texas researchers compared their results with previous water tests conducted before the fracking boom which started some 10 years ago and concluded that ‘alarming’ amounts of arsenic and other heavy metals have leached in the groundwater.

“This is indirect evidence that drilling does affect the water,” researcher Zacariah Hildenbrand said.

The researchers are careful not to suggest that drilling companies use arsenic into their fracking liquid mix or there’s a direct injection of the heavy metal in water wells. One theory of how the water might have become contaminated is that fracking-induced vibrations shook the rusty water pipes. Rust can contain arsenic, the researchers said.

This hypothesis, however, sounds implausible to industry leaders.

“If they’re talking about drills shaking [rust] free, that’s a little farfetched,” said Alex Mills, president of Texas Alliance of Energy Producers. “I’ve never heard or even came close to hearing that hydraulic fracturing is so vicious, so earth-shattering to shake loose rust from water wells.”

This statement is ludicrous by itself. Someone should tell Mr. Mills that hydraulic fracturing can indeed induce massive vibrations. Heck, it’s been linked (not yet strictly proven) with hundreds of man-made earthquakes already, most notably in places like Oklahoma where prior to the massive introduction of fracking has rarely seen earthquakes, historically.