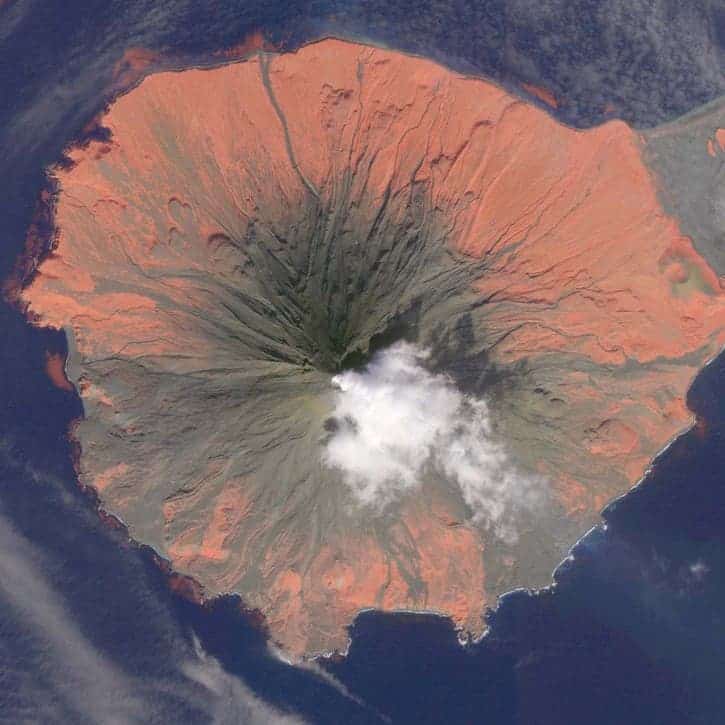 Increased heat emissions by a volcano located in the Aleutian were detected via satellite by the Alaska Volcano Observatory, which has issued an eruption advisory alert. Recent activity has increased the volcano to a Yellow Alert.

Mt. Cleveland, 5,676 ft. AGL, also referred to as Cleveland volcano is emitting seismic activity that seems to correlate with the heat emission reports. These measurements indicate the volcano could erupt at any moment, spewing ash clouds up to 20,000 feet (3.7 miles/6 km) above sea level with little further warning, the observatory said.
Located on a deserted island, 45 miles west of Nikolski and about 150 miles west of Unalaska/Dutch Harbor, in case of an eruption Cleveland is too far off any major settlements to cause any damage. A great incovenience might lay, however, with the International Trans-Pacific flights using the great circle route make flights daily over this portion of the Aleutian Islands. So far, airlines have not changed their flight patterns because of Cleveland’s heat emissions, said Steve McNutt, a University of Alaska Fairbanks scientist who works at the observatory.
The last time Clevaland erupted was in 2001, when it blasted ash more than 5 miles (8 km) into the sky and spilled lava from the summit crater. Cleveland has experienced several smaller eruptions or suspected eruptions since then.
Volcanoes are pretty unpredictable, and although scientists know from current measurements that its at risk of eruption, they can’t tell without a real-time seismic network at Cleveland, AVO when its going to eventually pop-out exactly. It could happen tomorrow, or just as well ten years from now.

“Short-lived explosions with ash clouds that could exceed 20,000 ft. above sea level can occur without warning and may go undetected on satellite imagery for hours. Low-level ash emissions at Cleveland occur frequently and do not necessarily mean a larger eruption is imminent.  AVO continues to monitor the volcano using satellite imagery,” website source explain.