Recycling is still a field where we have much work to do; while you hear talks about it everywhere, it’s still not done at a satisfying scale in most parts of the world. But Sweden is not part of that group. Virtually all of Swedish garbage is recycled; as a matter of fact, they are so good at making garbage useful that they sometimes import it from other countries.

Over 90% of all aluminum cans are recycled. Today, recycling stations are as a rule no more than 300 metres from any residential area. Most Swedes separate all recyclable waste in their homes and deposit it in special containers in their block of flats or drop it off at a recycling station. Everything has a purpose: newspapers are made into paper mass, bottles are reused or melted for raw materials, food is composted or transformed into soil and trucks are often run on recycled electricity or biogas. Waste water is repurified until it becomes drinkable again and pharmacists accept left over medicine.

You could say that they’ve taken things one step further. Just 1 percent of all the garbage ends up in landfills, that’s quite amazing. But it’s not all good when it comes to Swedish recycling – it gets quite controversial. Because while half of the garbage is recycled in conventional ways, the other half is burned for energy and heat – and that’s not quite sustainable.

Weine Wiqvist, CEO of the Swedish Waste Management and Recycling Association wants Sweden to do even more, and give up on burning the trash. 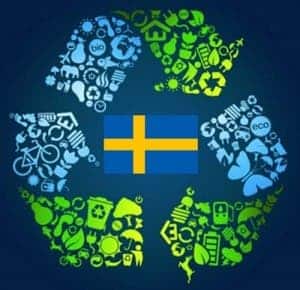 ‘We are trying to “move up the refuse ladder”, as we say, from burning to material recycling, by promoting recycling and working with authorities’, he says.

But even with burning the waste, they are very careful to pollute as little as possible. The process sends CO2 into the atmosphere, but the result is filtered through dry filters and water. The dry filters are deposited, and the resulting waste is just 15 percent of the initial mass. From this mass, metals are separated and recycled, and the rest, such as porcelain and tile, which do not burn are also extracted and used in constructions.

‘“Zero waste” – that is our slogan’, Wiqvist says. ‘We would prefer less waste being generated, and that all the waste that is generated is recycled in some way. Perfection may never happen, but it certainly is a fascinating idea.’

Indeed, the situation in Sweden is not perfect. But it’s really good – and certainly much better than what the rest of the world is doing, on average. No matter where you are, we have much to learn from Sweden.