Over ninety percent of all the world’s ice is in Antarctica, where it can run 4000-5000 meters deep. Yet, as a result of global warming, the ice sheet is melting at a rapid rate making it the most significant contributing factor to world sea level rise. It’s simple to throw in a label like global warming and be done with it, though. There’s still so much scientists need to find out, like what are the underlying mechanisms that cause ice loss – truly, this is a highly complex task. In the face of such complexity, a scientist’s best friend is data and a slew of mechanized underwater gliders may just be the best solution in this case. A study published in Nature Geoscience describes how these gliders were used to determine how warm water influences ice loss, where no other option was feasible. 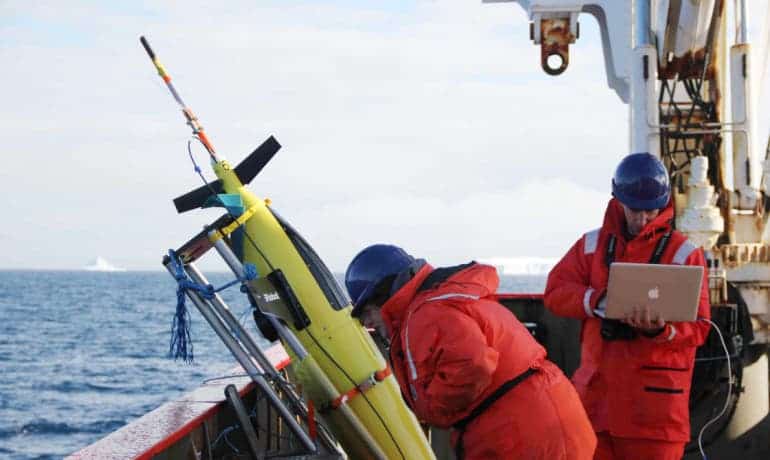 Oceanographers Liz Creed (Kongsberg, Inc.) and Andy Thompson (Caltech) run through a series of tests in preparation for the release of a Seaglider into the Weddell Sea in January 2012. (Credit: Alan Jamieson/Caltech)

The gliders are very small – only six feet in length – and come equipped with sensors that track temperature, salinity and oxygen levels in the water. These were used to study these characteristics up to several thousands feet below the Antarctic shoreline. To reach these depths, the gliders employ a pump that flushes liquid inside a compartment to make it denser than the sea water. When it needs to reach the water surface (it does so each several hours, where it signals the research team to pick it up and download the data), the pump injects liquid into a bladder on the outside of the glider, making it less dense and more buoyant so it can rise. 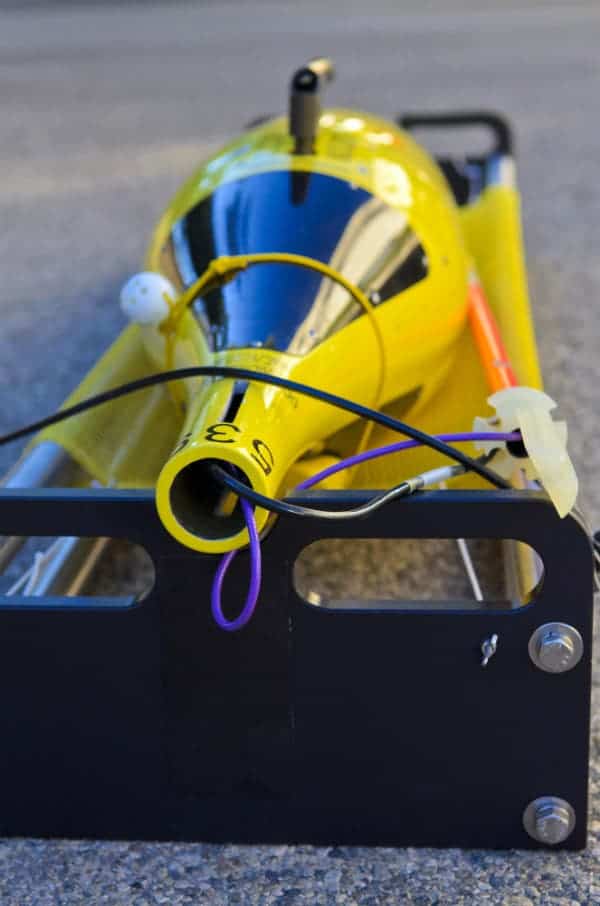 Traditionally, things like water salinity and temperature are determined using submersible probes launched from ships or via satellites. There’s only so much time the ship can spend at sea and satellites can’t probe temperature and salinity at very high depths, nor they have the best accuracy. As such, these gliders came as a godsend – they could stay at sea for months and months, surfacing only every couple of hours to transmit data. The wealth of information was immense, which led to a more refined view of what’s going on with the waters around the Antarctic and consequently how the continent’s ice is getting lost. 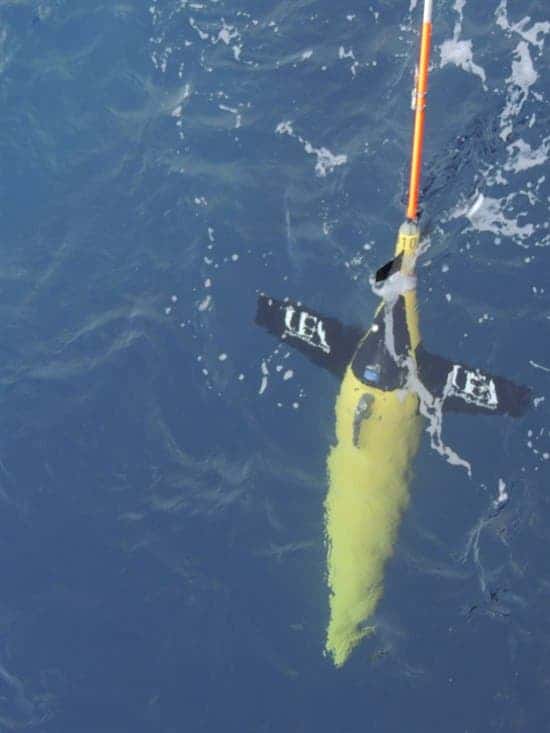 The gliders show that swirling ocean eddies, similar to atmospheric storms, play an important role in transporting warm waters to the Antarctic coast.

“When you have a melting slab of ice, it can either melt from above because the atmosphere is getting warmer or it can melt from below because the ocean is warm,” says lead author Andrew Thompson, assistant professor of environmental science and engineering at California Institute of Technology (Caltech).

“All of our evidence points to ocean warming as the most important factor affecting these ice shelves, so we wanted to understand the physics of how the heat gets there.” 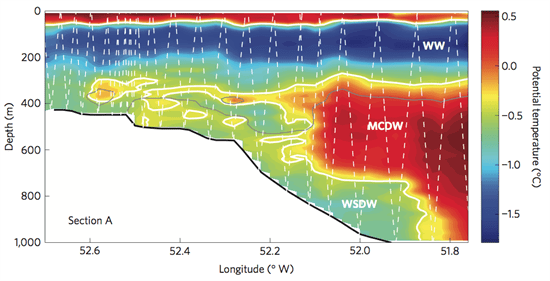 Temperature profile along a cross-section in the northwestern Weddell Sea on the coast of the Antarctic Peninsula. The shallower, coastal waters are on the left, and the deeper ocean on the right. The white section shows the seabed, part of the Antarctic land mass. The white dotted lines show the paths of the robot gliders when taking readings. Thompson et al. ( 2014)

Because there’s salinity, the warmest water doesn’t necessarily stay at the very top of the layer. Instead, as data from the glider clearly shows, the warm water is sandwiched between layers of varying temperature. This is highly important since it reveals that eddies – swirling underwater currents – are at the root of this warming.

“Eddies are instabilities that are caused by ocean currents, and we often compare their effect on the ocean to putting a spoon in your coffee,” Thompson says. “If you pour milk in your coffee and then you stir it with a spoon, the spoon enhances your ability to mix the milk into the coffee and that is what these eddies do. They are very good at mixing heat and other properties.”

“Ocean currents are variable, and so if you go just one time, what you measure might not be what the current looks like a day later. It’s sort of like the weather—you know it’s going to be warm in the summer and cold in the winter, but on a day-to-day basis it could be cold in the summer just because a storm came in,” Thompson says.

“Eddies do the same thing in the ocean, so unless you understand how the temperature of currents is changing from day to day—information we can actually collect with the gliders—then you can’t understand what the long-term heat transport is.” 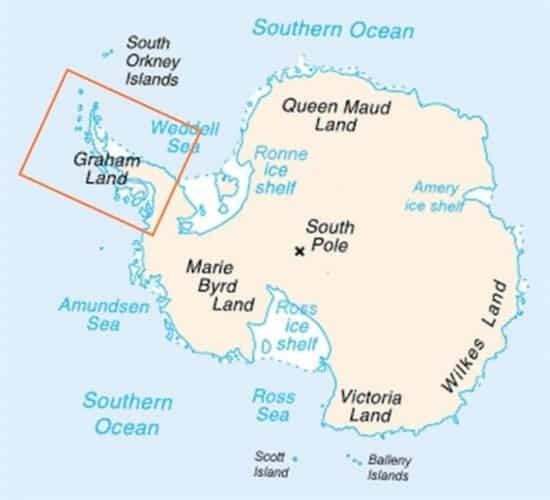 Understanding how ice is lost of the great important in order to make projections on how it will fair in the future. The better your model, the better your predictions. The Antarctic ice sheet spans more than 14 million square kilometers (think of the USA + Mexico) and every year some 150 billion tonnes of ice are lost. Most of the lost ice comes form the vulnerable Antarctic Peninsula, highlighted by the red rectangle above.

“Our research reveals the process by which warm water is being transported towards the ice. It is important because the rapidly melting ice sheets on the coast of West Antarctica are a potential major contributor to rising ocean levels worldwide,” co-author, Professor Karen Heywood said.

The gliders aren’t limited to Antarctic waters, though. Thompson and team plan on deploying an upgraded version (the Waveglider) to study a rough patch of ocean between the southern tip of South America and Antarctica, called the Drake Passage. Here, deep water from the Southern Ocean are “ventilated”—or emerge at the surface—a phenomenon specific to this region of the ocean. By studying this watery patch, researchers will better understand the CO2 exchange between water and the atmosphere. 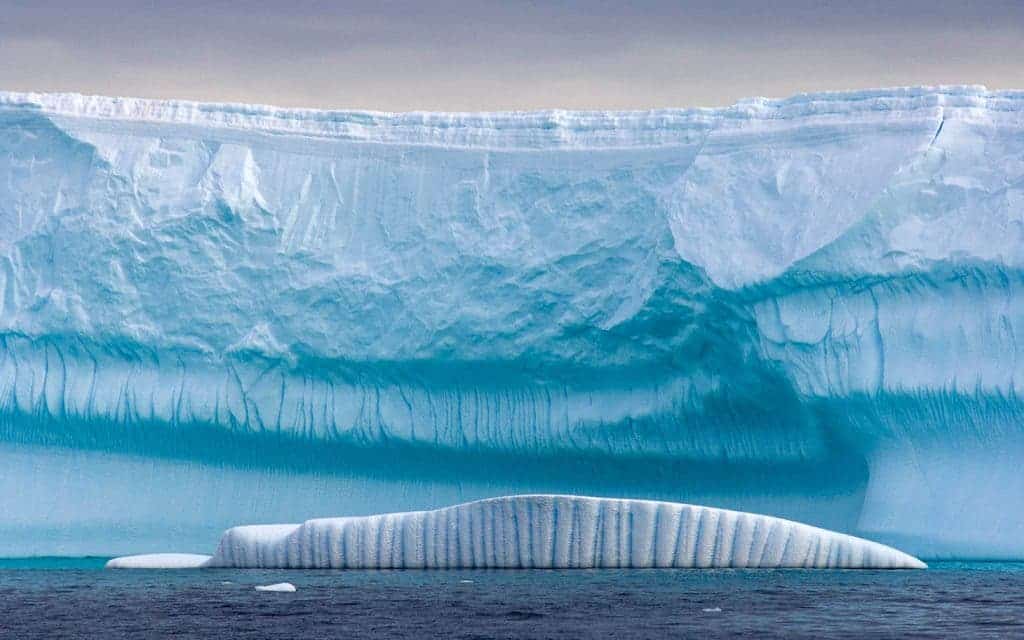 “With the Waveglider, we can measure not just the ocean properties, but atmospheric properties as well, such as wind speed and wind direction. So we’ll get to actually see what’s happening at the air-sea interface.”

“The Southern Ocean is the window through which deep waters can actually come up to ‘see’ the atmosphere”—and it’s also a window for oceanographers to more easily see the deep ocean,” he says. “It’s a very special place for many reasons.”

Ocean gliders are increasingly becoming popular, thanks to their practicability, for scientific research. A few years ago, the PacX Wave Glider, also known as Papa Mau, finally reached the end of its epic journey after it reached Queensland, Australia setting a new world record for the longest distance traveled by an autonomous vehicle. PacX swam over 9,000 miles after it departed from its original starting point – San Francisco Bay. Not only did the glider survive the high seas and a journey of this length, but more importantly, it collected and transmited ocean data in real-time from the most remote portions of the Pacific Ocean.