Australian solar researchers have converted over 40 percent of solar light’s energy into electricity, the highest efficiency ever reported by any team for this kind of system. The key for the design is a custom filter which captures sunlight that is normally wasted by commercial solar cells on tower.

“This is the highest efficiency ever reported for sunlight conversion into electricity,” UNSW Scientia Professor and Director of the Australian Centre for Advanced Photovoltaics (ACAP) Professor Martin Green said. 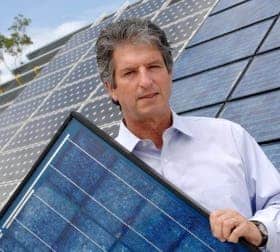 Scientists from the University of New South Wales (UNSW) in Australia achieved this record efficiency in real life outdoor conditions using commercial solar cells, which makes the achievement even more remarkable. The results were also confirmed by the National Renewable Energy Laboratory (NREL).

“We used commercial solar cells, but in a new way, so these efficiency improvements are readily accessible to the solar industry,” added Dr Mark Keevers, the UNSW solar scientist who managed the project.

The UNSW has a long tradition in innovating solar technologies; in 1989, they developed the first system in the world which converted sunlight into energy at a 20% efficiency. Now, 25 years later, they have doubled this performance.

The key here was a custom optical bandpass filter. Optical filters are selectively transmit light of different wavelengths – you basically get to select what wavelengths you want to work with. With bandpass filters, you select the wavelengths based on a certain frequency range. What’s particularly interesting to me is that they reached this performance with relatively cheap, and already existing technology. This means that the technology could become relevant very soon.

“The new results are based on the use of focused sunlight, and are particularly relevant to photovoltaic power towers being developed in Australia,” Professor Green said.

There are two types of solar towers. In the most common design, you have an array of flat, usually movable mirrors (called heliostats) to focus the sun’s rays upon a collector tower (the target). Then the solar rays heat water, the water evaporates, creates steam, the steam pushes a turbine which generates energy. Newer designs use liquid sodium or molten salts instead of water, with better results. The other, much less used type of design is called a solar updraft tower. In solar updraft towers, you don’t use water, and only heat air beneath a very wide greenhouse-like roofed collector structure surrounding the central base of a very tall chimney tower. The disadvantage here is that there is lower energy yield and you need very tall towers, but the advantages are lower construction costs, no need for water (useful in drought-affected areas) and relatively low maintainance costs. This type of design could have much success in Australia’s desertic areas, though most solar towers in the country use steam from liquid.

The work was funded by the Australian Renewable Energy Agency (ARENA) and supported by the Australia-US Institute for Advanced Photovoltaics (AUSIAPV). Renewable energy is already cheaper  than conventional energy in Australia, and the country has a lot of potential to make the transition to renewables in the near future. ARENA CEO Ivor Frischknecht was thrilled by the results and stated that Australia is still at the forefront of renewable energy research.

The 40% efficiency will be described in a peer review paper which will be published soon by the Progress in Photovoltaics journal. It will also be presented at the Australian PV Institute’s Asia-Pacific Solar Research Conference, which begins at UNSW today (Monday 8 December).

Article based on materials from UNSW.