Germany has taken a pioneering role in terms of renewable energy, in Europa and even worldwide. Many countries are now negotiating or even applying renewable energy systems, but in Germany the situation is different – most of renewables are owned by individuals (as opposed to companies), and most of them are produced in the rural areas – not in big cities. In 2013, villages produced 74% of their energy with renewable energy, and now, they’ve shattered another national record: in the first part of 2014, 31% of the entire country was powered by renewable energy. But it gets even better – some 90% of the solar energy produced in Germany comes from household roof-mounted panels, and Germany has installed more per-capita solar panels than any other country in the world. 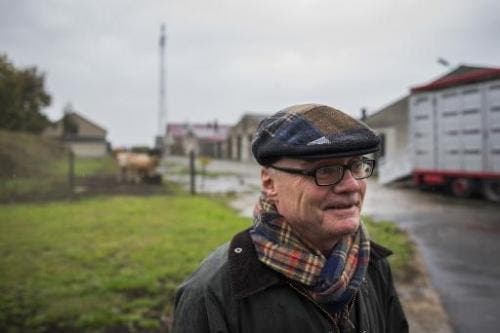 Werner Frohwitter, spokesperson for the “Freier Energieforum Feldheim” association stands at the bio gas plant in the energy-sufficient village of Feldheim, 80km south of Berlin.

At the vanguard of this approach is a tiny village called Feldheim. Home for just under 200 people, Feldheim has gone completely off the grid, switching to 100 percent local, renewable energy – and as a matter of fact, they produce so much energy that they actually export much of it to the national grid. The vast majority of the wind power they produce (about 99 percent) is sold back to the grid. The wind energy is complemented by a solar park built on the place of a former Soviet military base, and during the winter, locals heat themselves from a biogas plant powered by local pig and cattle manure and shredded corn, while on the coldest days a woodchip plant will also burn forestry waste.

They have their own local smart grid through which the energy is managed. Through this approach, Feldheim no longer needs to buy 160,000 litres (40,000 gallons) of heating oil a year, said Werner Frohwitter of the local energy cooperative.

“This money is no longer going to Arab sheiks or (Russian President) Vladimir Putin,” he said at the village 80 kilometres (50 miles) southwest of Berlin. “This money is now staying right here.”

The beginning was a little rough, as the villagers had to take bank loans and state subsidies to build the system, in partnership with green power company Energiequelle, but they are already enjoying the benefits. It will only be a few years before the loans are paid for entirely and the profits stay in the local environment.

This is the biggest infrastructure change Germany has went through since WWII. They want to reach a whopping 80 percent renewable energy just 8 years from now. But such a lofty goal has many hurdles and obstacles along the way. In many parts of the country, green energy is still more expensive (though not by much) than conventional, fossil fuel energy. This means that Germans now pay more for their electricity.

“The cost of the energy transition for the economy and consumers will continue to rise,” Germany’s Chemical Industry Association warned this month.

There are also unforeseen problems. Despite using more and more renewable energy, Germany’s carbon emissions have actually went up in the past couple of years. The problem is that renewable energy still needs to be complemented with fossil fuel energy – preferably modern, low emission natural gas plants. But with the lower demand for natural gas in Germany, many plants have shut down and their place has been taken by opportunistic coal plants, which are cheaper and easier to manage – and also pollute much more. Renewable energy may be the main provider of energy in Germany, but the second place was taken by lignite coal at 26.3 percent – one of the dirtiest forms of energy available – definitely something Germany wasn’t banking on.

But the country is taking steps in the right direction. The country’s leader, Angela Merkel has stated several times that putting a price on carbon is “the central instrument to fight climate change in Europe”.

What I personally like, and why I believe Germany will succeed in transitioning to clean energy is because they work from the bottom up. They don’t rely on corporations and external companies; they encourage the people to get involved and make a difference – and they are, as any proud resident of Feldheim will tell you.