Kenya has announced the launch the world’s largest single turbine geothermal power plant, which will add 140 Megawatts (MW) to the country’s national electricity grid. The project will bring much needed cheap energy to an impoverished country and fuel development in the area.

The Olkaria Area is an region located immediately to the south of Lake Naivasha in the Great Rift Valley of Kenya, Africa. Due to this special geological situation, Olkaria is very active from a geothermic point of view. The region has a total estimated potential of 2000 MW, twice the necessary demand in 2008 for the entire country! This project will actually reduce the cost of energy throughout the entire country by 50%, costing approximately $126 million – a meager price to pay when you consider Kenya’s population of over 44 million.

The first geothermal exploitation of Olkaria started in the 1950s; the area was also known for hot springs, hot grounds and fumaroles. By 1967, 27 shallow wells were dug, going down to about 60 meters (200 feet). Little else was done, until this project was planned. The geothermal plant was supposed to start running in 2012, but plans were actually delayed by a couple of years.

A much needed project 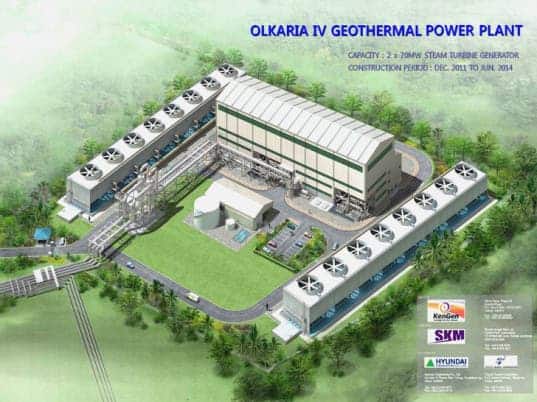 “We cannot keep on with this trend of stopping major projects which would transform the lives of our people. We have to really start thinking.”

Indeed, the delay of the project halted many other developments, including a program to provide free laptops to schools. 11,000 schools needed to be connected to the nation’s electricity grid for the program to go ahead, but to date only 6,000 have been connected. The remaining ones will likely be connected by Spring 2015.

The thing is, for a developing country, electricity (especially cheap, clean electricity) is paramount. The electrical energy lies at the very foundation of any development plan.

“You cannot fight poverty if you cannot create an environment where you can create jobs. All that cannot happen if you don’t have the essentials which is energy. These investments that we are making will go a long way towards empowering our people and combat social ills that have inflicted this country over the years.”

The Olkaria geothermal plant was funded in part by the Kenyan government, and in part by a series of investors, including the European Investment Bank.

Geothermal electricity generation is currently used in 24 countries, while geothermal heating is in use in 70 countries. El Salvador, Kenya, the Philippines, Iceland and Costa Rica generate more than 15 percent of their electricity from geothermal sources. Geothermal energy is regarded as clean energy, as the heat you extract from the Earth is negligible.

This is the largest single turbine geothermal plant, but there are other technologies available as well. The Geysers Geothermal Complex located about 121km north of San Francisco, California and has, in total, 18 power plants which generate 1,517MW. For countries like the US that’s just a drop in a pretty big ocean, but for a country like Kenya – this can be the beginning of a beautiful development.