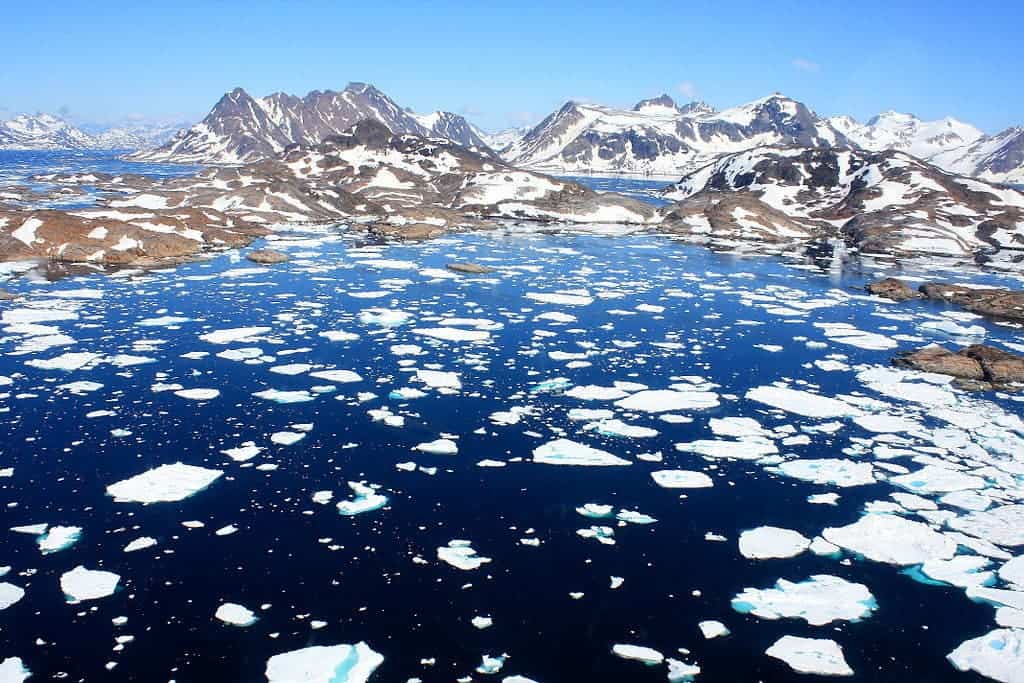 Greenland’s ice sheet has been melting at a formidable rate for more than 30 years, much to the awe of climate scientists. The Greenland ice sheet is up to 3km thick and would raise sea levels by seven meters if it all melted into the sea. Right now, its adds roughly 1mm a year to the global average sea level. The consequences of all this massive volume of freshwater have never been properly understood but a new study paints a clearer picture, at least in one respect. According to researchers at Aarhus University, Denmark, melting ice has significantly altered the salinity content of coastal waters in Northeast Greenland. Nutrient flow, and thus ecosystems, are affected.

The Aarhus group employed 13-year-long in-site measurements recorded within the framework of the ‘Greenland Ecosystem Monitoring Program’ since 2003. The measurements performed in and outside the Young Sound sea unambiguously show surface water layers have become less saline by up to 1.5 salinity units per milliliter over the studied period. In other words, the researchers say, freshwater content grew from approximately 1 meter in 2003 to almost 4 meters in 2015.

The melted ice eventually makes its way into Greenland’s fjords from the ocean where it influences ecosystem structure. More freshwater at the surface of the water makes it more difficult for the nutrient-rich bottom layer to transport food to the upper layers where there’s sunlight. Both nutrients and sunlight are essential for plankton algae to bloom during the summer. Plankton sits at the bottom of the food chain, which all fish and marine ultimately rely on. 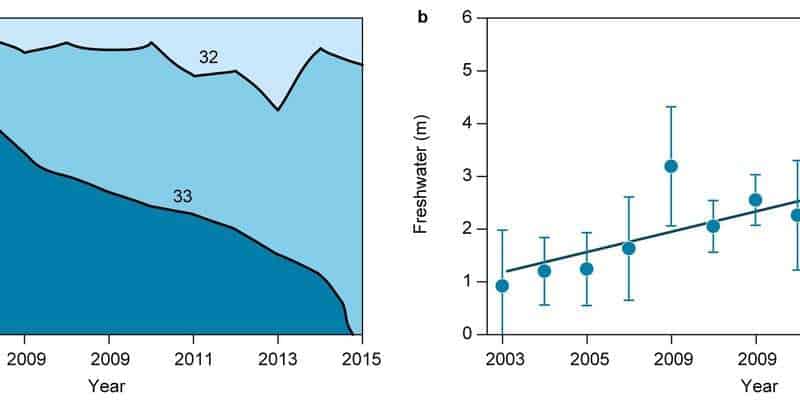 Changes in summer salinity from 2003 to 2015 in Young Sound, Saline water is increasingly being restricted to deeper layers due to inflow of freshwater from melting Greenland ice. Credit: Mikael Sejr

According to the authors of the new study, accelerated ice loss in the Arctic Ocean has driven up freshwater content considerably in the past decade, at a rate of approximately 600  km3 per year.  As far as the Greenland Ice Sheet is concerned, the ice loss rate has now doubled when compared to the rate experienced over 1983–2003.

“Nobody expected the ice sheet to lose so much mass so quickly,” said geophysicist Isabella Velicogna of the University of California, Irvine, earlier this year for Science Mag. “Things are happening a lot faster than we expected.”

Although the Arctic does indeed warm at twice the rate as the rest of the world, the precipitous erosion of Greenland ice can’t be explained by temperature alone. Most recently, scientists have come to understand that the unusually warm summers allow algae and microbes to grow on the wet surfaces of the ice sheet, where their pigments boost ice absorption of solar energy. Ideally, you want the ice sheet to be as white as possible for maximum light reflectivity but soot and dust carried from lower latitudes by currents have also darkened the ice. 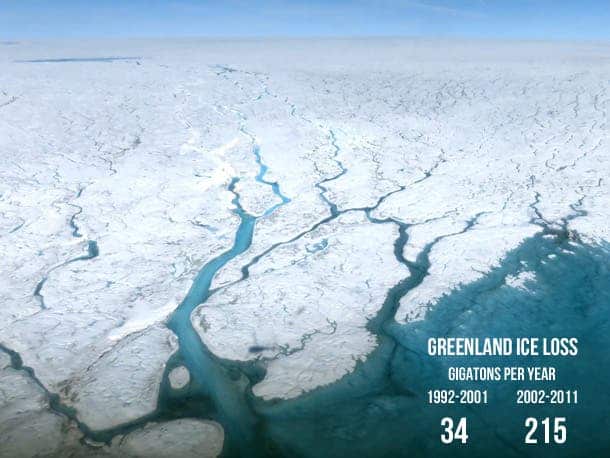 Melt streams on the Greenland Ice Sheet on July 19, 2015. Ice loss from the Greenland and Antarctic Ice Sheets as well as alpine glaciers has accelerated in recent decades. Credit: NASA photo by Maria-José Viñas.

“Recent modeling studies have shown that meltwater from East Greenland may be efficiently transported to the Labrador Sea. Combined with the decreasing salinity trend in our data it suggests that a signal of ocean freshening is being transported downstream by a nearshore component of the East Greenland current and will contribute to the freshwater content in the subarctic Atlantic,” the authors reported in the journal Scientific Reports.