A momentous change took place in the US, and it was largely fueled by one of the more unlikely places: Texas. 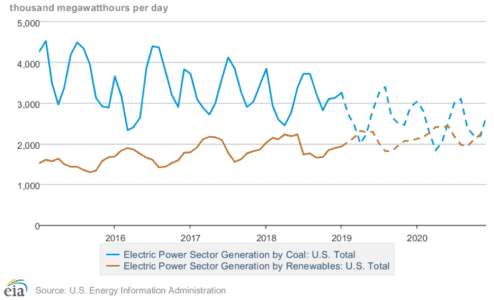 According to data from the Energy Information Administration (EIA) Short-Term Energy Outlook, renewable energy has overcome coal in April. The trend might also continue in May, but probably not into the summer.

It may seem that the US has taken a U-turn when it comes to clean energy, largely due to the current’s administration stance — pro-fossil fuels and against renewable energy. But under the radar, renewable energy continues its growth. In April, the renewable energy sector (hydro, biomass, wind, solar and geothermal) has generated more electricity than coal-fired plants, and current projections suggest that it will also trump coal in May.

An impressive change representative of this tipping point is the state of Texas, traditionally one of the US states most fond of fossil fuels. Wind and solar in the state overtook coal for the entire first quarter of 2019 and with 300 renewable energy projects currently in the works for Texas, there are reasons to be optimistic that the state is slowly transitioning from coal to renewable energy.

Texas is also not alone. Several other states, including California, New Mexico, and Hawaii, have announced policies that support green energy. However, this doesn’t mean that renewables have become dominant in the US.

It’s normal for renewable energy to provide a larger percentage of the total supply in the spring, since demand for heating and industry is relatively low, and demand from air conditioners hasn’t increased yet. Furthermore, spring is the favored period for coal plants to undergo maintenance. We’re still a long way away from renewables surpassing coal at a national, yearly level.

However, there are some serious signs of life. Even through policy adversity, the renewable energy is still continuing its climb — and although that climb is much slower than it could be, it’s still something. Technological developments are also significant. Energy capture potential has grown substantially in the past decade, and a storage improvement (which would be groundbreaking for renewable energy) also seems right around the corner.

With the advent of large-scale batteries and continuous progress, renewable energy might be entering a golden age — and we definitely need it.