Since 2007, shale gas has boomed by 700% in the US and is projected to rise for the next 30 years. While there are states where well fields span across hundreds of hectares, you’d think that the effects of exploitation of this caliber are well researched and documented. In reality, the bio impact of fracking remains largely unknown. Of course, this doesn’t stop oil companies from going on with their business and even claiming everything’s safe without anything solid to actually backup their claims.

Fracking in the dark 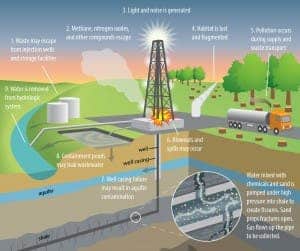 A study made by eight conservation biologists from various organizations and institutions found large knowledge gaps when it comes to the direct and quantifiable effects fracking has on the biosphere and environment in general. This has led them to conclude that exhaustively determining the risks fracking possess on the environment must be a top priority for policymakers.

Hydraulic fracturing or fracking as it’s commonly referred to involves releasing shale gas trapped beneath rocks. The rocks are broken using a high-pressure liquid mix of water, sand and other chemicals, which can include carcinogens and radioactive substances. Public fears are growing about contamination of drinking-water supplies from the chemicals used in fracking and from the methane gas itself. Field tests show that those worries are not unfounded. A Duke University study published in May found that methane levels in dozens of drinking-water wells within a kilometer (3,280 feet) of new fracking sites were 17 times higher than in wells farther away. Then there’s earthquakes.

Even so, there are many things about fracking does to the environment that we don’t know, according to the team of researchers. Which begs the question: why are we chasing shale gas so furiously, when we have so little knowledge what the consequences may be 10, 15 or 20 years from now?

“We can’t let shale development outpace our understanding of its environmental impacts,” said co-author Morgan Tingley, a postdoctoral research associate in the Program in Science, Technology and Environmental Policy in Princeton’s Woodrow Wilson School of Public and International Affairs.

While fracking has become fairly common today, the technology isn’t exactly novel – it’s been around since the 1970’s, so why don’t we know more about it? Much to blame for this gaps in knowledge are the oil companies themselves, which refuse to divulge important and sensitive information to public health, under the protection of law – something that to me is totally backwards from what a civilized country should look like. Of the 24 American states with active shale-gas reservoirs, only five — Pennsylvania, Colorado, New Mexico, Wyoming and Texas — maintain public records of spills and accidents, the researchers report. And get this – oil companies aren’t obliged to report oil spills, being the government’s task. In other words, oil companies can get away with spills if nobody see them and there’s not even a fine.

“The Pennsylvania Department of Environmental Protection’s website is one of the best sources of publicly available information on shale-gas spills and accidents in the nation. Even so, gas companies failed to report more than one-third of spills in the last year,” said first author Sara Souther, a postdoctoral research associate at the University of Wisconsin-Madison.

“How many more unreported spills occurred, but were not detected during well inspections?” Souther asked. “We need accurate data on the release of fracturing chemicals into the environment before we can understand impacts to plants and animals.” 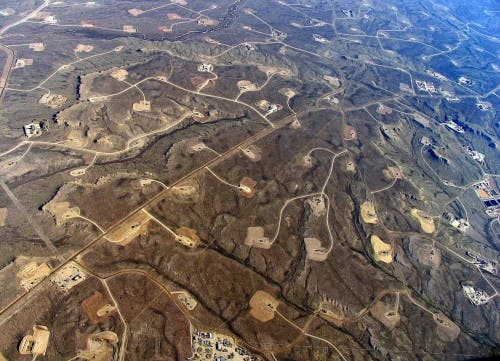 The study identified several threats to biodiversity as a result of rapid and widespread shale development, which has disproportionately affected rural and natural areas. A single gas well results in the clearance of 3.7 to 7.6 acres (1.5 to 3.1 hectares) of vegetation, and there are sites where hundreds are dispersed. Besides clearing, the wells cause noise, air and light pollution that interfere with habitats and migration patterns.

“If you look down on a heavily ‘fracked’ landscape, you see a web of well pads, access roads and pipelines that create islands out of what was, in some cases, contiguous habitat,” Souther said. “What are the combined effects of numerous wells and their supporting infrastructure on wide-ranging or sensitive species, like the pronghorn antelope or the hellbender salamander?”

One other issue, besides lack of leaks and spills reports, that hinders a thorough qualitative analysis has to do with the chemicals being used in fracking wells. There are many types of wells, each using a different set of chemicals to break rocks, some of which are undisclosed and protect by patent laws.

“Some of the wells in the chemical disclosure registry were fractured with fluid containing 20 or more undisclosed chemicals,” said senior author Kimberly Terrell, a researcher at the Smithsonian Conservation Biology Institute. “This is an arbitrary and inconsistent standard of chemical disclosure.”