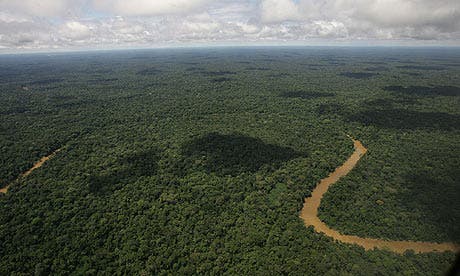 Yasuni National Park to be one of the world’s richest biological hotspots, home to one of the densest biodiversity in the world. The region has been under threat, however, from oil drilling efforts for many years now, and a recent announcement from behalf of the Ecuador government further tightens the knot on the Amazon basin.  President Rafael Correa said that as the nearly three-years long international appeal of raising $3.6 billion in exchange for foregoing drilling has been unsuccessful, the government ‘needs’ to move on with the project.

Some 10,000 square kilometers of land amount to Ecuador’s side of Yasuni National Park, a protected area where a great number of unique species live exclusively, some of which are endangered. The Ecudoarian side is also home to some of the few groups of indigenous tribal groups left in the world who are in voluntary isolation : the Waorani indigenous people and two nomadic Waorani clans. It’s also home to oil, a lot of oil –  three contiguous blocks known collectively as the Ishpingo-Tambococha-Tiputini (ITT) oil field.

The Yasuni drilling in Ecuador has been a matter of great debate and controversy for many years. A while back, Correa launched what is called the Yasuni-ITT Initiative, a 13-year plan under which the government would forgo drilling in the park in exchange for donations equaling one-half of the value of the oil, a sum that analysts put at $3.6 billion. The initiative failed miserably, as a mere $13 million in donations have been collected. Correa blamed “the great hypocrisy” of nations who emit most of the world’s greenhouse gases.

“The world has failed us,” Correa said. “It was not charity that we sought from the international community, but co-responsibility in the face of climate change.”

Drilling oil in the middle of the Amazon

Of course, environmental groups were quick to oppose oil efforts in the region. According to recent polls, some 90% of Ecuadorians oppose drilling, however this number might dwindle has pro-drilling campaigns are prepped, meant to inform the general public on the benefits the project will have for the country’s economy and social well-being. This kind of advertisement will be joined by claims that the environmental impact of IIT Yasuni drilling will be minor.

Correa claims  that oil development would have an impact on less than 1% of the park and that the government would take steps to protect the environment. Local environmental specialists however are highly skeptical of this figure and question the means through which it was obtained.

“We know from experience that a road leads to loss or degradation of a swath of 5 to 8 kilometers wide,” says ecologist Kelly Swing, founder of the Tiputini Biodiversity Station, a field research center in the park. So “the 1% figure across the entire Yasuni Biosphere Reserve would amount to 20,000 hectares,” Swing says. “With over 100,000 species living in each hectare, we’re talking about a huge number of species and individuals.”

How ‘eco’ is Ecuador?

Just 50 kilometers north of Yasuni, a half-century of oil development has left little nature intact,  says  Kevin Koenig, Ecuador program coordinator at Amazon Watch in Quito. And other oil fields are being developed to the east and south, in effect surrounding Yasuni’s uncontacted tribes in the so-called intangible zone. One of the more troubling portions of Ecuador’s drilling plan is the inclusion of a 60-kilometer pipeline network to move the oil. Furthermore, there’s always the case of oil spills. With so much crude oil going about, were a spill to occur it could spell nothing short of disaster for Yasuni. “With this kind of heavy crude, it’s not a question of if there is going to be a spill,” he says. “Rather, when there is going to be a spill.”

Oil is Ecuador’s chief source of foreign earnings. The country produces 538,000 barrels of crude a day, delivering nearly half its production to the United States.