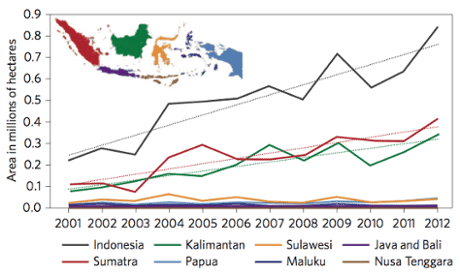 Despite its forest being only a quarter the size of the Amazonian rainforest, Indonesia lost 840,000 hectares of forest in 2012 – almost double compared to 460,000 hectares in Brazil.

Indonesia has been steadily increasing its deforestation rates. According to UN estimates, they cut down 310,00 hectares of all its forest a year between 2000 and 2005, increasing to 690,000 hectares annually from 2006 to 2010. It shouldn’t be a shock that now, they’re nearing 1 million hectares a year.

Of course, these numbers are hard to estimate, and typically they tend to underestimate rather than overestimate, but this is the most extensive study so far, and the results are dire. That year, 2012, was the absolute record for deforestation for any country.

Indonesia is the world’s third largest produced of greenhouse gases, trailing just after China and the US. Almost all of its greenhouse gases (85%) come from forest destruction and degradation. In case you didn’t know, forests are the world’s largest carbon store above the ground – when you cut them down, you not only eliminate a way of removing the CO2, but you actively release it in the air.

Belinda Arunarwati Margono, who gathered the data and works at the Ministry of Forestry blames the government for lack of transparency.

“Government cannot share data fully because of laws. There is no transparency”, she said.

Among many other animals, orangutans are only found on the islands of Borneo and Sumatra. Just like many other species, their numbers are rapidly dwindling, and the main cause is (you’ve guessed it) deforestation. So why exactly are they deforesting so huge areas? Well, the main enemy of Indonesian forests is the palm oil.

Palm oil is bought as is for cooking, but it’s also found in many products we use on a day to day basis (in foods and soaps among others), and it’s highly unsustainable. This is not related to the study, but I advise you to avoid purchasing products with palm oil. If you want to take things even further, take a minute to write the company that you won’t be buying its product until it’s palm oil-free. Yes, it’s that bad.

Also, palm oil has been used as a biofuel – which, science has shown, is neither sustainable nor green. It’s simply bad.