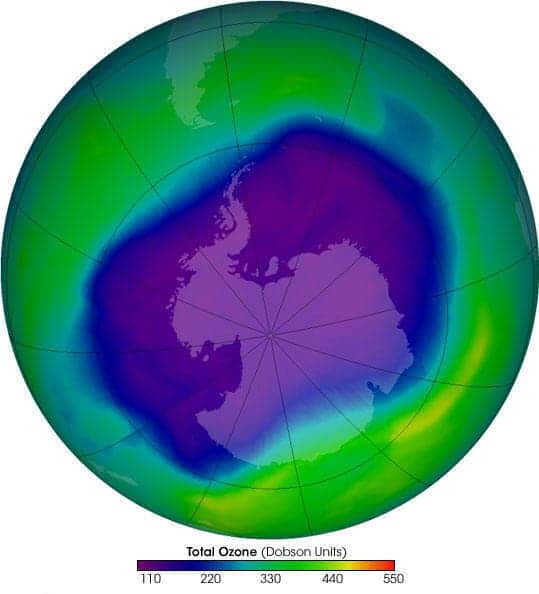 The ozone layer over Antarctica follows a natural thinning cycle each year, which man-made pollutants exacerbate. Ozone depletion is usually worse the further from the equator and recently an Ozone hole (as defined by a distinct area of very low ozone levels) has been detected above the North Pole in the Arctic. Credit: NASA.

After scientists discovered a huge hole in the ozone layer above the Antarctic in 1987, an emergency UN panel banned the use of chlorofluorocarbons (CFCs) under the Montreal Protocol. CFCs build up in the atmosphere and react with the triple oxygen molecule to break it down. Thirty years later, the ozone hole is widely considered plugged — problem solved. Not so fast, caution scientists at the University of East Anglia in the UK. According to a new study, there are still threats to the delicate cushion in the stratosphere shielding us from harmful UV rays, which are due to harmful substances not regulated by the treaty.

A hole in the ozone (and the Montreal Protocol)

Many of the substances still harming the ozone layer were not included in the Montreal Protocol because their impact on the ozone layer was not considered damaging. Chemicals like dichloromethane, which has applications in paint stripping, agricultural fumigation, and pharmaceutical production, were thought to be “too short-lived to reach the stratosphere in large quantities,” explained David Oram, a research fellow at the UK’s National Centre for Atmospheric Science.

At ground level, ozone or smog is a poisonous chemical often expelled by vehicle exhaust. High up in the stratosphere, ozone builds up at altitudes between 10 and 50 km where it acts as a shield against the harmful ultraviolet rays, which can cause cancer. Ozone holes occur naturally from cooling, but man-made chemicals greatly accelerate their formation. Currently, the ozone hole above Antarctica is the size of North America.

Besides dichloromethane, another highly concentrated chemical identified in the stratosphere includes 1,2-dichloroethane — an ozone-depleting substance used to make PVC, a popular construction material. PVC manufacturing has surged in the last couple of years in China, its main hotspot. What was unexpected, however, was the steep rise in dichloromethane emissions (mainly sourced from China) since this is not only expensive but also toxic. “One would expect that care would be taken not to release [dichloroethane] into the atmosphere,” Oram commented in a public statement. Over the past decade, dichloromethane became approximately 60% more abundant in the atmosphere as compared to the early 2000s.

“Our estimates suggest that China may be responsible for around 50-60% of current global emissions [of dichloromethane], with other Asian countries, including India, likely to be significant emitters as well,” says Oram.

Even though these emissions originate in China and other locations around East Asia, these industrial pollutants can easily leach into the tropics, where the air is more readily lifted into the upper atmosphere. In other words, these chemicals, albeit short-lived, have the time to interact with the ozone layer before breaking down.

“We found that elevated concentrations of these same chemicals were present at altitudes of 12 km over tropical regions, many thousands of kilometres away from their likely source, and in a region where air is known to be transferred into the stratosphere,” says Oram.

Right now, the chemicals in question are not present in quantities significant enough to tear a new hole in the ozone layer but at the current rate of development, that may change. As such, the authors of the new paper published in the journal Atmospheric Chemistry and Physics suggest this gap in the Montreal Protocol should be addressed by banning the chemicals or, at least, limiting their capability to leach into the atmosphere. According to Oram, the average date for ozone recovery, now set to 2050, could be delayed by 20-30 years, “depending on future emissions of things like dichloromethane.”

This is not the first study that identifies ‘very short-lived substances’ (VSLS) — chemicals which break down in less than six months — as ozone depleters. In 2015, a study published in Nature Geoscience found VSLS, dichloromethane included, are increasingly contributing to the depletion of the stratospheric shield.

“In the Antarctic region, where the ozone hole forms each year and where ozone decreases are the most dramatic, we estimate that VSLS account for about 12.5 per cent of the total ozone loss.”

“Globally averaged, the ozone loss due to VSLS in the lower stratosphere could be as much as 25 per cent, though it is much smaller at higher altitude,” Ryan Hossaini of the University of Leeds, UK, and lead author of the study said at the time.