Three startups – Carbon Engineering, Global Thermostat and Climeworks – are making machines capable of managing the buildup of carbon dioxide in the atmosphere. The new devices literally suck carbon dioxide out of the air and have great potential.

In a way, all life creates pollution – organisms take raw materials and energy from their surroundings, and use them to create, maintain and power their structures. These processes create waste, that is released back into the environment. Ecosystems have evolved in such a way that these substances are reused, allowing life to nurture life. If the quantity of any substance or energy being released is too great, and the mechanisms that process it are overburdened and it clogs up the workings of the system – it pollutes. 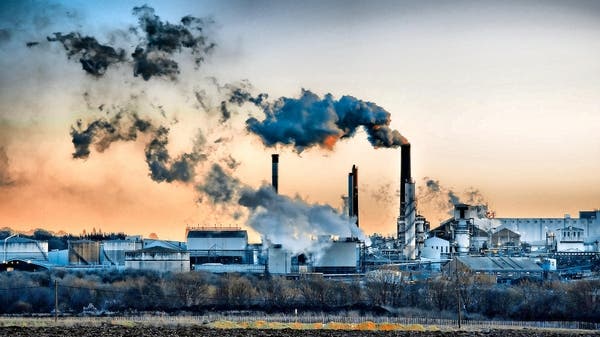 Human activity, just like any other life-form’s, generates pollution. It started with the first fires that we lit, and it has been with us ever since, even before the industrial revolution. Our modern society creates different kinds of pollution, far greater than any other animals’. Our villages, mines, farmlands, industrial centers, our cities can be compared to tissues or whole organs, specialized structures that take in raw materials and energy, transform them into usable end products and generate side-products that must be disposed of.

The scale at which we build them means they gobble up huge quantities of energy, without which our society would collapse – no power means no working refrigeration to keep your food yummy until you get it in your tummy, and no working pumps to supply you with clean water. Cars release the chemical energy stored in fuel to move, steel mills use it to melt metal, and the internet would be a real bore without electricity. It’s a great life, but it becomes less great-y really fast when you unplug it.

Our need for power has driven us to find more and more concentrated sources of energy: we went from muscle, to firewood, to fossil and nuclear. According to the World Energy Council, most of the energy we use still comes from burning fossil fuels, roughly  80% of supply, while new renewables (solar, wind, geothermal, marine) provide about 1.5%. For electricity production, fossil fuels supply 66% (up by 2%), with renewables supplying around 5%. Over the last 10 years the share of coal has increased to around 28% (up by 4.5%), oil has decreased to 31% (down by 6%), while gas has increased to 23% (up by 2%). The report also notes that the development of renewables has been significantly slower than was expected 20 years ago. 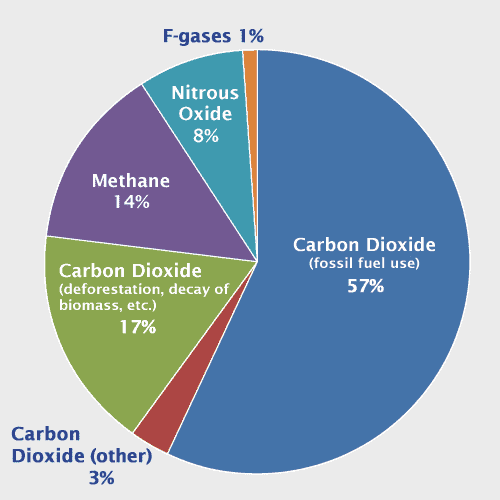 EPA’s chart showing global greenhouse gas emissions by gas. Source: IPCC (2007); based on global emissions from 2004. Details about the sources included in these estimates can be found in the Contribution of Working Group I to the Fourth Assessment Report of the Intergovernmental Panel on Climate Change.

Burning fossil fuel releases a lot of green house gases into the atmosphere, mostly carbon dioxide, that retain solar heat and warm up the planet. Given the slow pace at which we are weening off fossil fuels, scientists are developing new devices that can literally suck carbon dioxide out of the atmosphere. They say that this carbon capture and storage is a necessary tool for avoiding catastrophic climate change.

In April, Climeworks, a Swiss-based startup captured carbon dioxide from the air and supplied it to a German firm, which then recycled it into a zero-carbon diesel fuel, the Guardian reports.

While simple and effective, the economic viability of such methods is yet to be confirmed

“These companies are a long, long way from success, it must be said. Deploying direct air capture at a scale sufficient to make a difference to the climate would be a vast and costly undertaking,” says Marc Gunther, a writer and speaker on business and sustainability.

But the need for such technology could become urgent,he adds.

“Their work matters because of the increasing likelihood that we will need to deploy ‘negative emissions’ technologies like direct-air capture to avoid pushing through the 2 degrees of global warming that governments have agreed is a safe upper limit,” says Gunther.

Science writer Eli Kintisch notes that the need for such technology is easy to see, as most methods for mitigating carbon dioxide emissions currently available are only effective in areas where large quantities of the gas are released, such as industrial and power plants. He estimates that about 52% of emissions caused by distributed, smaller sources like cars, farms, and homes could be dealt with air-capture machines installed anywhere on Earth.

Given the serious questions about the methods’ economic viability, Robert Socolow, director of the Princeton Environment Institute and co-director of the university’s carbon mitigation initiative, says he worries that talk of air capture as a remedy for carbon emissions could breed complacency when it comes to the need to cut down on fossil fuel consumption.

I don’t want us to give people the false hope that air capture can solve the carbon emissions problem without a strong focus on [reducing the use of] fossil fuels,” he told MIT Technology Review.