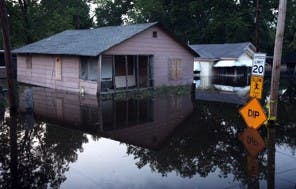 Late this Monday, the Mississippi crested in at 47.8 feet (14.5 meters), just less than a foot below the city’s record, set in 1937. As the river reaches nearby city neighborhoods and Shelby County suburbs, nature has “put the pin back in the grenade,” said county spokesperson Steve Shular.

Floods are really nasty, but for the local fauna everything’s gone for a turn to the worst, as the waters are forcing them to leave their natural habitat and look for shelter elsewhere – some less lucky get drowned in the process.

“We’re starting to see some issues, especially with the snakes,” Shular explained. “We’ve definitely seen a lot of snakes, like water moccasins [picture]”—venomous pit vipers with potentially fatal bites that are also called.

Yes, those are venomous pit vipers (commonly know as cottonmouths) which could potentially fatally bit a person, and as swollen rivers start reaching up near homes and neighborhoods, things start going really crazy.

“We want to make sure people understand that the rules have changed,” Shular said.

“When that water gets into a neighborhood, snakes are going to be searching for shelter and food in homes or sheds or wherever they can slither into.”

The sudden influx of snakes in residential ares could prove to be devastating for the already thinning number of snakes in the Mississippi area, simply because people kill them on sight usually when they see them in their backyards.

It’s not just snakes either, countless rabbits, turkeys, deer, and other animals have been forced to flee—or perish.

“We’ve seen photos of herds of deer on levees trying to get away from the waters and heard from the Army Corps of Engineers that they’ve seen deer drowned during the flood,” according to Tennessee Wildlife Resources Agency officer Jereme Odom.

“One of our wildlife managers even spotted deer and coyotes”—natural enemies—”standing on the same levee together,” he said.

While most animals will survive the Mississippi River flood, for some their habitats could take years to return to normal. The local wild turkey is one of the most hardly hit species by the floods in the area. The wild turkey is nesting in this time of year, and as a result many of those nests have been lost to or displaced by floods – countless new hatched birds might not survive.

“Animals will be displaced for so long that, when the water does recede, it will take a while to get back to their original habitats,” he said. “Some may be established elsewhere or displaced so far away that they never get back.”

Neighboring residents are advised to wait for Mississippi levels to decrease

The Tennessee Wildlife Resources Agency is advising people, whenever possible, to simply wait for animals to return to their normal habitats. Floods come and go, and eventually the Mississippi water level should dampen.

“Animals that appear to be in need of rescue should be left alone,” Chad Harden, a big game coordinator with the agency, said in a May 6 statement.

“They are under stress, but their natural survival instincts will help them cope with the situation until things get back to normal. The animals could pose a real danger to someone who might try to rescue them.”

For his part, Tennessee wildlife officer Odom is taking the long view.

“This isn’t the first time we’ve seen major floods. It goes all the way back to Noah, and the animals are still here,” he said. “The main thing is what humans will do to let them come back.”

2 thoughts on “Mississippi flood leads to hoards of animal refugees”