It’s been a busy day throughout the bustling corridors of the Bab Ighli conference center here in Marrakech, Morocco, where COP22 just kicked off. Delegates from more than 190 countries will meet over the next weeks to granularly discuss and apply the Paris Agreement which was hammered out last year. 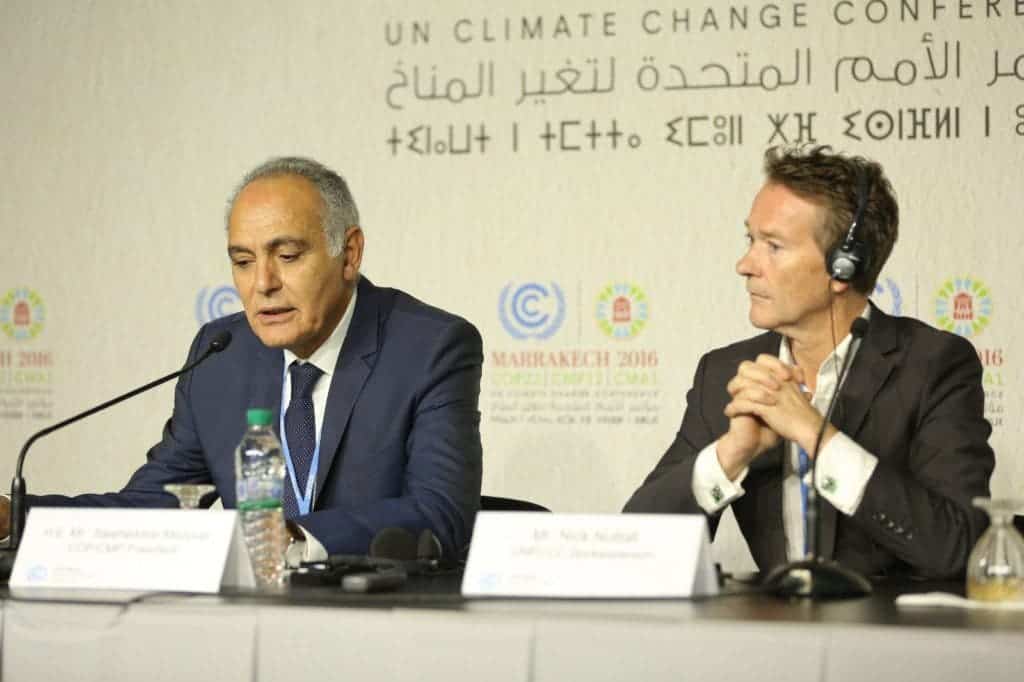 The fact that we’re gathered in Marrakech is no coincidence. For starters, Morocco is one of the most forward-thinking African countries in terms of climate policy and action. In 2011, the kingdom revised its constitution to add the right to a healthy environment and sustainable development. Earlier this year, Morocco opened the first phase of Noor I — a massive concentrated solar array which is already serving 160-megawatts of solar capacity and, eventually, will be scaled to 580-megawatts capacity. The $9 billion solar power plant should be completely ready in 2018, serving one million Moroccans with clean, sustainable electricity. By 2030, 52% of the country’s energy ought to come from renewable energy sources, as outlined in the kingdom’s current energy strategy.

Morocco’s renewable energy initiatives are being propelled, partly, by wise governance phasing out subsidies for fossil fuels in favor solar and other renewables instead. This is of vital importance for a country which is dependent on imports for 90% of its energy needs.

Secondly, Morocco is one of the countries hardest hit by climate change in the region. Its 2,175 miles of coastline, where most of Morocco’s economic activity takes place, makes it particularly vulnerable to sea level rise. Some 40 percent of the 33 million Moroccans living in the kingdom are currently engaged in agriculture, most of it small scale. Though they probably can’t explain it in terms of “man-made climate change” and “carbon pollution”, they certainly feel its effects.

“The rain now comes in showers instead of sustained downpours, and we see arid areas spreading.”

Morocco isn’t alone. According to a 2014 report from the Potsdam Institute for Climate Impact Research (PIK), countries like Sudan, Ethiopia, those surrounding Lake Victoria in central Africa, and the continent’s south-eastern corner — especially parts of South Africa — will be most vulnerable to climate change effects like severe droughts, reduced plant growth or floods near Lake Victoria. This is why this year’s United Nations conference on climate change has been unofficially called the “African COP” — the voices of the African people desperately need to be heard.

Salaheddine Mezouar, the COP22 President, opened the conference this morning with a message to world leaders calling for more ambition. Mezouar reiterated the remarks made by HM King Mohammed VI on the anniversary of Morocco’s Green March (November 6) in which he called for Marrakech to be the COP of action. Mezouar said Morocco’s southern neighbors see the event as critical and have high expectations in terms of climate finance, capacity-building, and technology transfer.

In December 2015, the Africa Renewable Energy Initiative (AREI) was announced — a bold action plan that will see 10 GW of renewable energy capacity added across the continent and $100 billion in foreign investment by 2020. At a side event here at Bab Ighli, we learned that the aim is to install 300 GW of renewable energy capacity by 2030 in Africa — an extremely challenging goal.

This massive initiative was on everyone’s lips but while the COP22 President praised AREI, he told those gathered at the press conference that more needs to be done. Mezouar mentioned the emergence of green finance (like the Green Fund) which also concentrates on finding ways to deliver climate friendly financing. He added that one of the major initiatives which will be the focus of COP22 is Morocco’s Adaptation of African Agriculture “AAA”.  This initiative is designed to drive climate finance and technology solutions to smallholder farmers across Africa in order to boost sustainable agriculture on the continent.

The COP of solutions

At Paris, 196 nations signed pledges called Nationally Determined Contributions (NDCs) that, on a case by case basis, reduce or cap greenhouse emissions in order to limit global warming. Now, these need to be tidied so that their impact is measurable. Schedules and baselines need to be implemented in a clear and transparent manner.

These NDCs are supposed to get more ambitious over time under a ratchet mechanism since current pledges only limit global warming to 3 degrees Celsius while the goal is to keep it ‘well below 2 degrees.’ The first stockstake, which will evaluate how each country performed to meet its goals, will take place in 2023 with a practice run scheduled for 2018. Now, at COP22, countries will discuss the form and content of these stockstakes, like the input sources and provisions of support.

As outlined earlier, a major focus will be on building climate change resilience for poor and vulnerable countries. To this end, the Paris Committee on Capacity Building was established during the previous COP. At a meeting earlier this year, a draft document outlining rules for the functioning of the committee was presented and at COP22 countries will have the chance to sign it. The signatory nations will also be expected to recommend what the main focus of the committee will be for the year 2017.

The Paris agreement has already entered into force, and while direct action isn’t scheduled for two more years, there is still a lot to do before then. Climate change has gathered a massive inertia and international efforts tend to be slow, bureaucratic and inefficient — so any plans drawn in Paris need to be addressed as soon as possible. Hopefully, this is what we’ll see in Marrakech: concrete plans, concrete actions, concrete solutions. A lot of ink has flown and much more will certainly flow in the future but for now, we’re done talking. Let’s start working, shall we?