As if the area wasn’t tense enough socially and politically, Iran and Iraq are also facing major environmental concerns in the form of huge dust swirls. Iran’s capital city of Tehran is suffering most from an increasing amount of dust storms as winds at speeds of up to 80 kilometers broke trees and shattered the windows of houses, smashing power lines and filling up cities with dust. 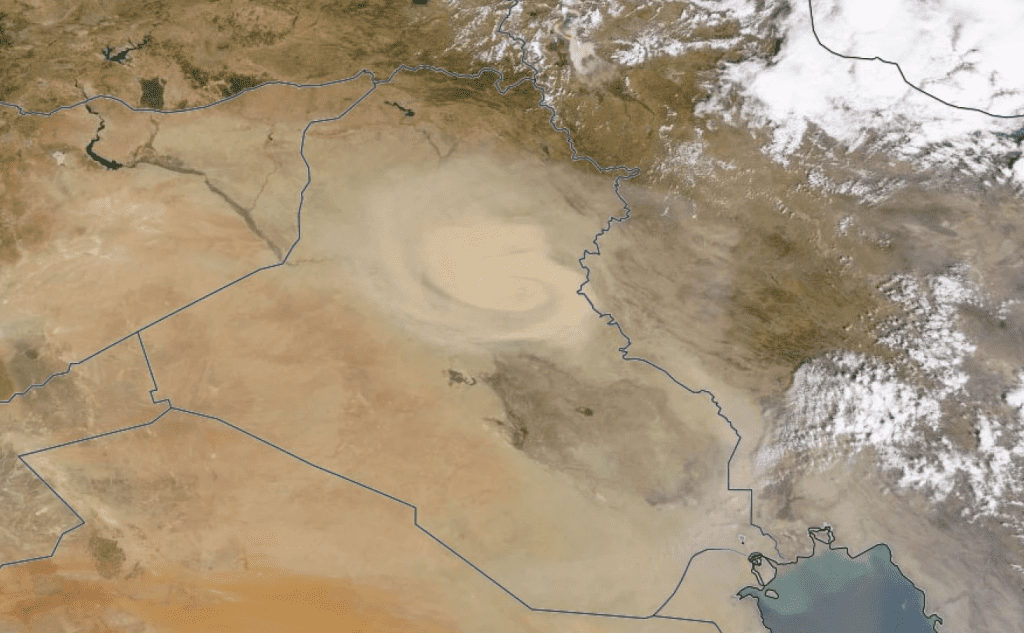 The dust storm, as seen by NASA from satellite. Image via NASA.

A massive dust storm took place in Tehran on June 2, 2014 at 16:50 (local time). 5 men were killed and more than 30 people were injured, and a few cars were destroyed as well. Falling trees and objects in balconies caused 1200 electric 20 KW lines to become disconnected. That storm wasn’t an isolated event, and in recent years, more and more dust storms seem to threaten the country and its neighbor, Iraq. In February, another massive storm blanketed most of southern Iran in a thick coat of dust, and now, it’s happening again.

Twitter is abuzz with worrying pictures taken on site, but the storm is so huge it can actually be seen from outer space. Power outages and traffic accidents caused by low visibility are already reported in the country. A while ago, the Head of Iran’s Environment Protection Organization, Masoumeh Ebtekar warned that the Iranian people should learn to tolerate dust storms because they’re likely to happen again and again, with no solution in sight. In fact, there’s still no clear understanding as to why these storms are happening and increasing in intensity in the first place.

To make things even worse, it’s not just the immediate impacts that are worrying, but also the long-term impact, especially for agriculture and respiratory health. Dust storms cause soil loss from the dry lands, and worse, they preferentially remove organic matter and the nutrient-rich lightest particles, thereby reducing agricultural productivity. Also the abrasive effect of the storm damages young crop plants. DDust storms also create problems due to complications of breathing in dust.