No later than October, Climeworks expects to open the first ever commercial carbon dioxide capture plant in the world, near Zurich. The plant will capture carbon straight from the ambient air, then funnel it to nearby greenhouses via a pipeline to spur the growth of vegetables. Some of this carbon can also be converted into liquid fuels. 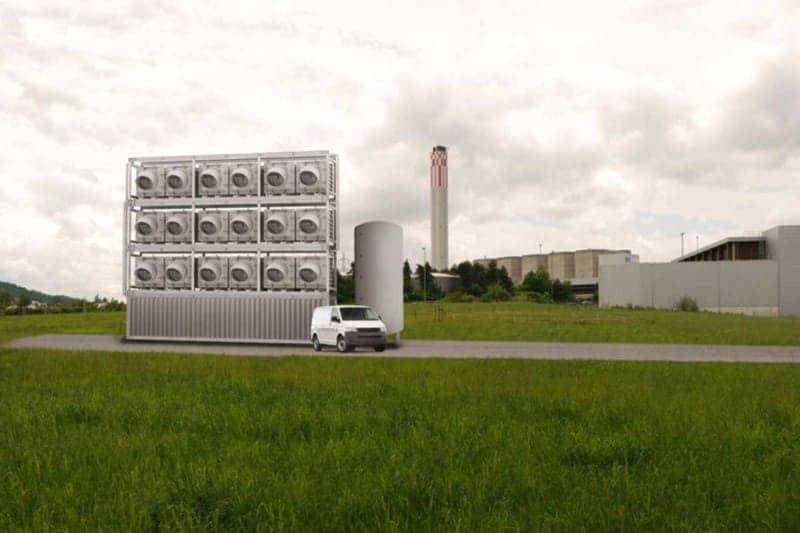 The process used in the pilot plant is called direct air capture (DAC). Like a sort of artificial tree,  DAC systems extract CO2 from the air using chemicals that bind to CO2 but not to other atmospheric chemicals (such as nitrogen and oxygen). In this particular case, Climeworks’ plant uses a sponge-like material which is filled with amines, organic compounds derived from ammonia.

Once the filter becomes saturated, it can be squeezed dry by adding heat which releases the CO2. Pipelines connected to the DAC system will then funnel the gas to a nearby four-hectare greenhouse. The firm also wants to make liquid fuel, presumably using a catalytic chemical process similar to the one we covered earlier on ZME Science that produces methanol. Since the captured CO2 is returned to the atmosphere, either in the greenhouse or after the liquid fuel made with CO2 is burned, the Zurich plant is a carbon recycling system, not a carbon sequestrator.

Collecting carbon from the ambient air, however, is extremely expensive. Speaking for New Scientist, Climeworks CEO Dominique Kronenberg said they hope to capture carbon dioxide at a cost of about $600 per tonne once they open the plant, then steadily improve and drive it down from there. The plant will collect between 2 and 3 tonnes of CO2 a day.

“The advantage of taking it out of the ambient air is that you can do it wherever you are on the planet,” says Kronenberg. “You don’t depend on a C02 source, so you don’t have high costs transporting it where it is needed.”

Humans about 40 billion tonnes of CO2 annually. Even capturing a million tonnes at that price tag is intimidating.

“I think it provides false hope,” says Howard Herzog, senior research engineer at the MIT Energy Initiative. If we are unwilling to use relatively cheap mitigation options, like alternative energies, today, he says, “why should we expect future generations to adopt significantly more expensive measures to deal with CO2?”

I tend to incline to Herzog’s side. At this kind of price, it just doesn’t seem feasible — especially when you’re putting that CO2 back in the air.

This is a pilot plant, however, and there are many lessons we can learn. A well-designed carbon capture system can suck in hundreds of times more CO2 than trees can over the same surface area, and the resulting CO2 can be used to make useful materials like fibres or construction materials. Most importantly, if all fails, direct air capture might be an integral part of the battery of tools we’d have to use to avert runaway climate change decades from now.

For now, though, I’m not really sure if this is brilliant or stupid.