Virtually all climate scientists agree that climate change is happening right this instant and that human activity is the main cause of it. But according to a survey carried out by Yale and George Mason University, just 15% of Americans are aware of this fact.

The most recent report compiled by the Intergovernmental Panel on Climate Change (IPCC) — the leading international body for the assessment of climate change — concludes that 100% of all warming experienced since 1950 is due to human activity. Multiple studies also show that 97 percent or more of actively publishing climate scientists agree that climate-warming trends over the past century are due to greenhouse gases released into the atmosphere by human activity.

Retorting to authority does not prove that climate change itself is real but this consensus is actually based on peer-reviewed published, verifiable science. If anything, the fact that thousands of professionals and experts in their field agree in such a staggering majority that climate change is real should make any person of another opinion think twice, at the very least. After all, the vast majority of doctors agree that smoking causes cancer — this is an undisputed scientific fact — and the public seems to be fully aware of this and trusts the consensus.

So then why is the public in the United States so divided on the issue?

According to a 2017 Yale study,  only 53% of Americans believe climate change is caused by human activity. In other words, one in two people thinks the direction climate is heading is completely natural or impossible to influence by human hand.

The reason for this polarization is manifold. On one hand, the media is playing an active part in making climate change sound like a debatable issue. The biggest broadcast networks collectively aired shows or news covering climate change for no more than 50 minutes for the whole year of 2016. That’s how much time the planet and the livelihoods of millions of species are worth to them. When they do talk about climate change or events under a climate change lens, often there are no real scientists invited to the discussion or, worse, they air climate denialism. On the other hand, you have politicians who are (baselessly) very vocal about climate change being an unsettled scientific issue or outright deny the fact.

The country’s President, for instance, is one of the most outspoken climate change denialists, saying that “the concept of global warming was created by and for the Chinese in order to make U.S. manufacturing non-competitive,” and later that “global warming is a total, and very expensive, hoax!” According to a list compiled by Vox, Donald Trump has tweeted climate change skepticism 115 times (as of June 2017). Last week, on CBS’s ’60 Minutes’, Donald Trump — who claims to have “a natural instinct for science” — had this to say:

“We have scientists that disagree with [human-caused global warming] … You’d have to show me the [mainstream] scientists because they have a very big political agenda.” 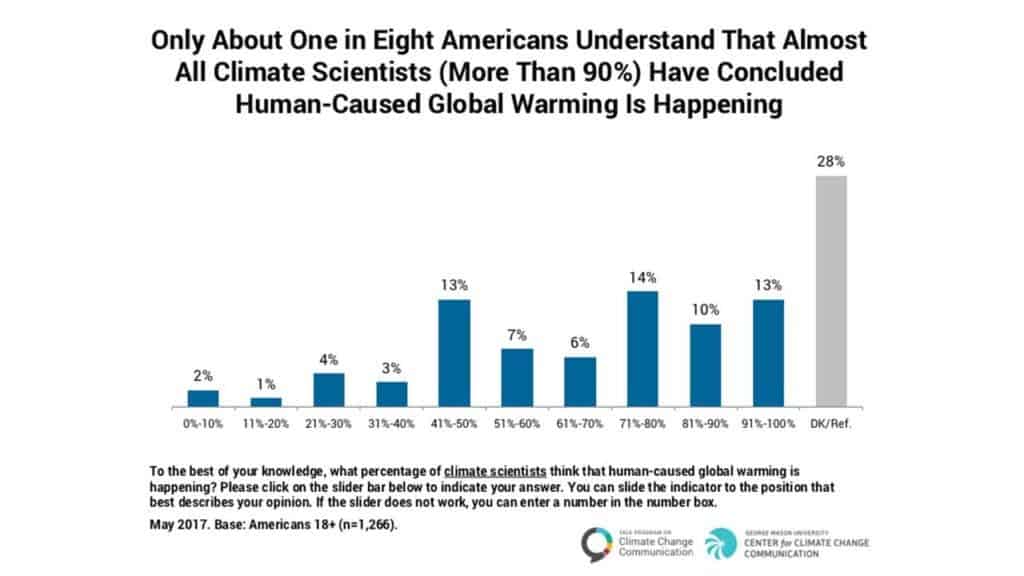 With such statements bombarding the public, it’s no wonder that people are divided on the issue, even though many would listen to reason if they were more aware of the expert consensus. According to a survey carried out by the Yale program on Climate Change Communication, only about 15% of Americans are aware that the expert climate consensus exceeds 90%. Based on the public’s perceived expert consensus, the authors ended up with a ‘Six Americas’ categorization, as follows:

“The Alarmed are fully convinced of the reality and seriousness of climate change and are already taking individual, consumer, and political action to address it. The Concerned are also convinced that global warming is happening and a serious problem, but have not yet engaged the issue personally.”

“Three other Americas – the Cautious, the Disengaged, and the Doubtful – represent different stages of understanding and acceptance of the problem, and none are actively involved. The final America – the Dismissive are very sure it is not happening and are actively involved as opponents of a national effort to reduce greenhouse gas emissions.”

Even the Americans who are ‘Alarmed’ and ‘Concerned’ aren’t completely educated on the expert consensus. Only 84% of people in the Alarmed group and 73% of those in the Concerned category say they know 97% of scientists agree that climate change is caused by humans.

According to The Guardian, which cited a 2017 study, Americans who learned of the 97% consensus were far more likely to accept the reality of climate change — and this was particularly true for conservatives. This shows that, despite the many smoke screens cast out by Trump and acolytes, people still trust experts. The important thing now is getting this message across.

If you think the climate and our future is worth fighting for, share this article to a friend or colleague.