Remember the “mysterious” craters in Siberia? You know, the ones which “no one could explain”? Well, geologists had a pretty good idea what was happening, and the studies they recently conducted confirmed their theories. The craters are caused by methane seeping from the melting permafrost. 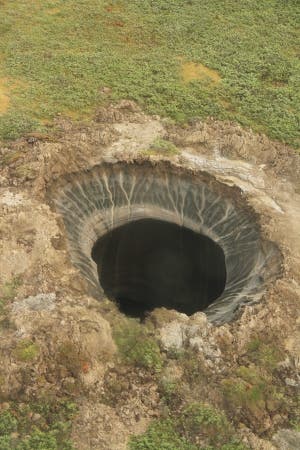 The crater in Siberia is 30 meters wide, and probably over 100 meters deep. It was caused by methane.

Air near the bottom of the crater contained very high concentrations of methane – about 9.6%. In case you’re wondering, the normal concentration of methane in air is somewhere at 0.000179%. So, sorry to burst your bubble guys, but there was never any serious talk about meteorite crashes, missile explosions or aliens. If you’ve read that somewhere, you can just cross it off your list of serious science journalism.

The Russian researchers from the  Scientific Centre of Arctic Studies in Salekhard working in the area attribute the hole formation to the abnormally hot Yamal summers of 2012 and 2013, which were warmer than usual by an average of about 5°C.  What does global warming have to do with this? Well, the permafrost has huge quantities of methane and carbon dioxide trapped in it. If it starts to melts, it starts to release those gases and dramatically exacerbates global warming. The only questions is if this warming was caused by the two abnormally hot winters, or, as Hans-Wolfgang Hubberten, a geochemist at the Alfred Wegener Institute in Potsdam, Germany believes, by a slow and steady thaw in the region.

The depths of the craters (there are quite many) are not known, but when Russian scientists lowered a 50 meter cable with a camera to it, they couldn’t even see the bottom – so it’s much deeper than that. They believe there is a pool of water somewhere between 70 and 80 meters, but its impossible at the moment to say how deep that pool really is.

“Its rims are slowly melting and falling into the crater,” says Andrei Plekhanov, one of the scientists working in the area. “You can hear the ground falling, you can hear the water running, it’s rather spooky.”

There are several risks associated with this phenomenon. The most obvious would be of someone actually falling in such a crater, but in the remote areas of Siberia, the risk is fairly small. Much more concerning is the risk of trapped methane threatening local communities and industries.

“If [a release] happens at the Bovanenkovskoye gas field that is only 30 km away, it could lead to an accident, and the same if it happens in a village,” says Plekhanov.

However, in the long run, the risk remains global warming. If you look at a satellite picture of the area, you see countless rather similar holes, and though there’s not yet an official explanation as to how they came to be, it seems safe to say that permafrost methane leakage is also responsible. The accelerated effect this phenomenon will lead has not yet been studied.