A team at George Washington University has found a way to hit two birds with one stone: mitigate climate change by pulling CO2 from the atmosphere and make a valuable material at the same time. The solar powered setup reacts a molten lithium carbonate in the presence of heat and an electrical current to produce carbon fibers, recently highly prized in engineering applications from cars and airplanes to wind turbines to tennis rackets. 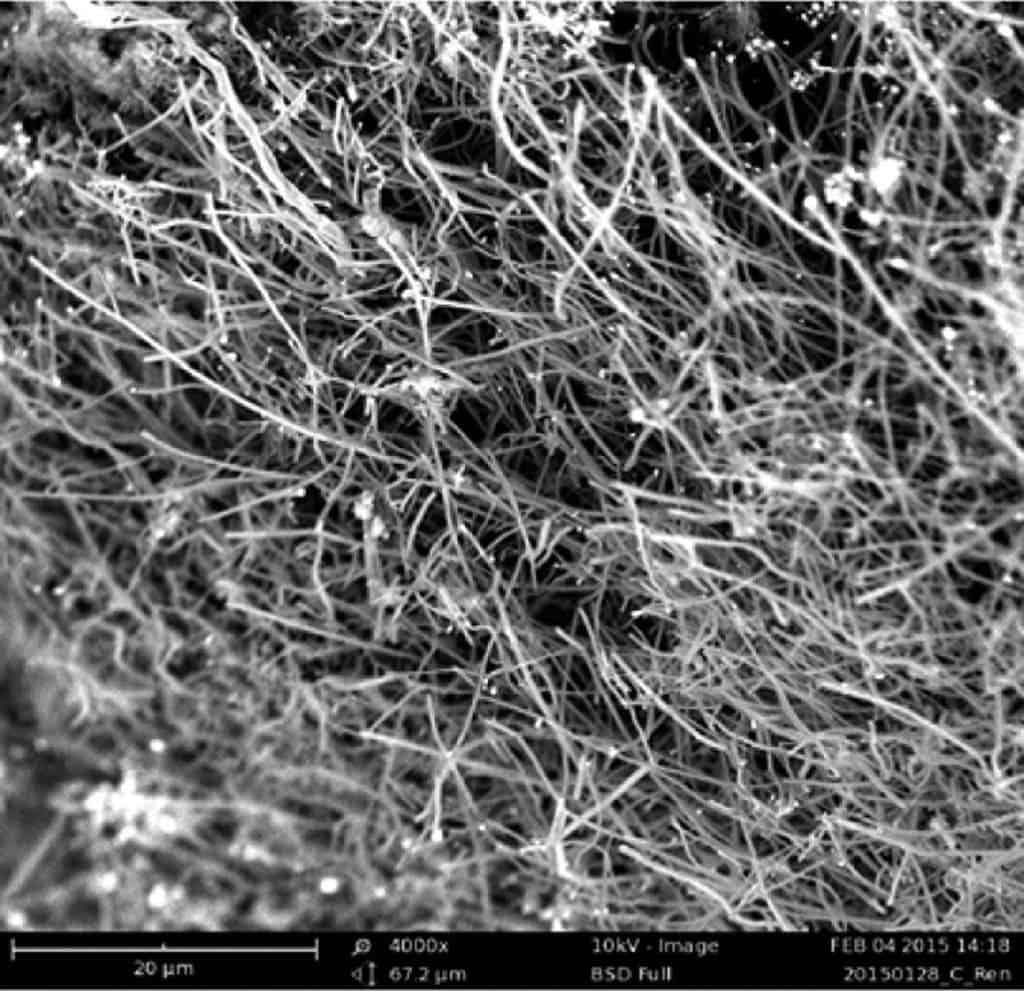 The carbon nanofibers (seen above) were generated using a solar-powered electrochemical reactor that uses CO2 as its starting material. Image: George Washington University

The Solar Thermal Electrochemical Process or STEM first uses a concentrated solar power array to generate electricity and, secondly, heat the experimental device. Carbon dioxide from the air is pulled into the electrochemical reactor at one of two electrodes immersed in molten lithium carbonate. Running volts of electricity through the lithium carbonate at a specific temperature (750 degrees Celsius) kicks of a chemical reaction that dissolves the CO2 forming carbon nanofibres at the surface of one of the electrodes and lithium carbonate, which can be reused again in the next reaction.

Since it’s fully solar powered and uses CO2 directly fed from the atmosphere, the device basically makes carbon fibers out of thin air. This is definitely exciting considering a tonne of carbon nanofibers are valued on the market at $25,000. The researchers at George Washington claim, however, that they can scale their model to bring the cost down to $1,000 per tonne. Remember, all while pulling out CO2 from the atmosphere.

“One of the great threats facing our planet is climate change,” said Stuart Licht, of George Washington Univ.’s Dept. of Chemistry. “Rather than attempt to survive the climate change consequences of flooding, wild fires, starvation, economic disruption, human death and species extinction, we must mitigate the greenhouse gas carbon dioxide.”

To curb global warming you need to do two things: stop emitting (massive amounts) of CO2 and sequestrate the excess carbon that’s already in the atmosphere. Various carbon sequestrating techniques have been proposed, the most common being using pours rocks that absorb CO2 then burring them a mile or so underground. This is expensive and hardly makes a dint in global warming – you’d need to build thousands of carbon storage pits through the world. 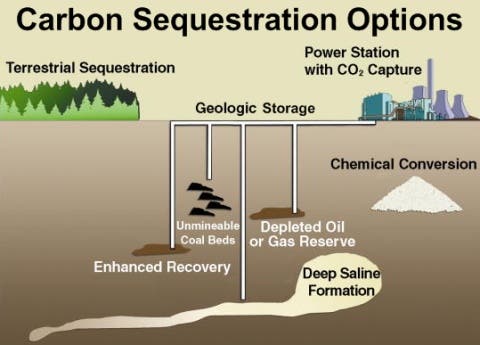 How do we stop global warming while renewable technologies to meet our energy needs are still under development? Part of the answer may lie in an emerging transition technology called Carbon dioxide (CO2) Capture and Storage (CCS).

What Licht and colleagues demonstrated is brilliant because the industry really needs these carbon fibers and the world needs to remove the excess carbon from the atmosphere. Of course, don’t imagine that carbon fiber plants will remove that much. For now, their prototype produces 10 grams of carbon nanofibres per hour, but it can be easily scaled. Licht says his team ran some numbers and found their setup could remove enough CO2 to decrease atmospheric levels down to those of the pre-industrial revolution within 10 years using a physical area less than 10% that of the Sahara desert. This sounds quite impractical at this point, but remember each solution and method that might help curb global warming helps. Just like renewable energy sources, there’s no one winning strategy. Decades from now, all sorts of carbon sequestrating and carbon removal methods will be employed. For instance, another interesting idea ZME Science reported earlier concerned reacting gaseous CO2 with low grade minerals such as magnesium and calcium silicate to produce limestone – a material used in constructions.

There are still a couple of things Licht and colleagues need to solve until their solution can compete with other carbon nanofibre producing methods. For one, their fibres are too short for any noteworthy practical use. They have to find a way to grow the fibres longer. “It’s like when you shear a sheep and you get wool,” James Tour, a nanoengineering and materials scientist at Rice University in Houston said for Science. “Those little wool fibres that first come off its back — you can’t make a blanket out of that. You have to somehow get it spun into long fibres that you can then put into a machine to get a wool sweater or blanket.”