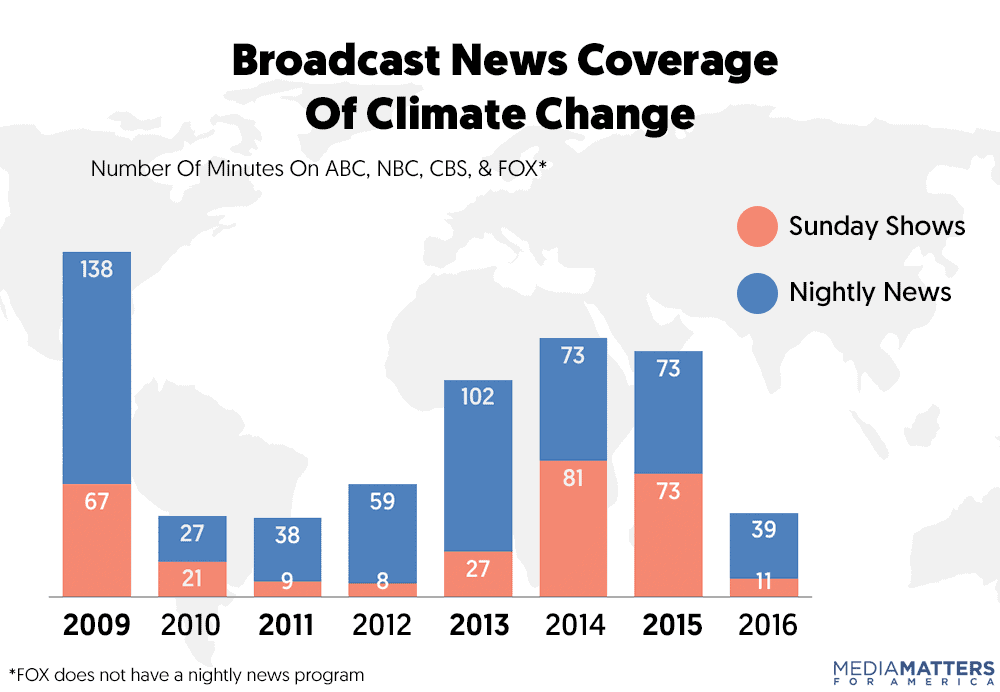 Despite a lot of things that happened to the climate or were climate related in 2016, the most influential US broadcast networks reserved little to no air time for these subjects. According to a fantastic report by Media Matters evening newscasts and Sunday shows on ABC, CBS, and NBC, as well as Fox Broadcast Co.’s Fox News Sunday, collectively decreased their total coverage of climate change by 66 percent compared to 2015. All of these huge networks collectively aired shows or news about the climate for 50 minutes. All of them. In a whole year. Let that sink in for a moment.

For ABC, CBS, NBC, and FOX, climate change isn’t worth talking for more than 50 minutes in a year. How much is the climate worth to you? 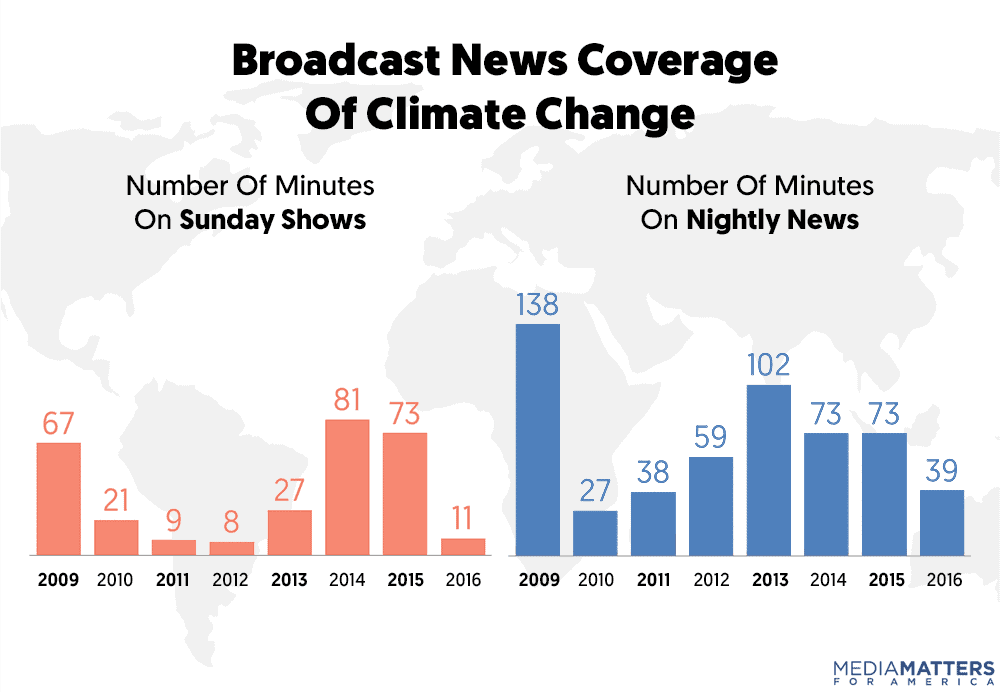 According to the report, the aforementioned broadcasters aired 146 minutes worth of climate coverage in 2015 but only a year later the coverage plummeted, and it’s not like there wasn’t plenty to talk about. In 2016, the Paris Agreement came into force, which is one of the most important pacts in recent history from all points of view. The year 2016 itself was the warmest on record because of anthropogenic global warming. The Great Barrier Reef has seen the worst coral bleaching in years. Arctic sea ice is at a record-low. Then there were the extreme weather events tied to climate change, like Hurricane Matthew and the record-breaking rainfall and flooding in Louisiana.

I presume most of you find these to be topics of interest, but for these broadcasters climate change wasn’t worth the air time despite their viewer numbers being in the millions. 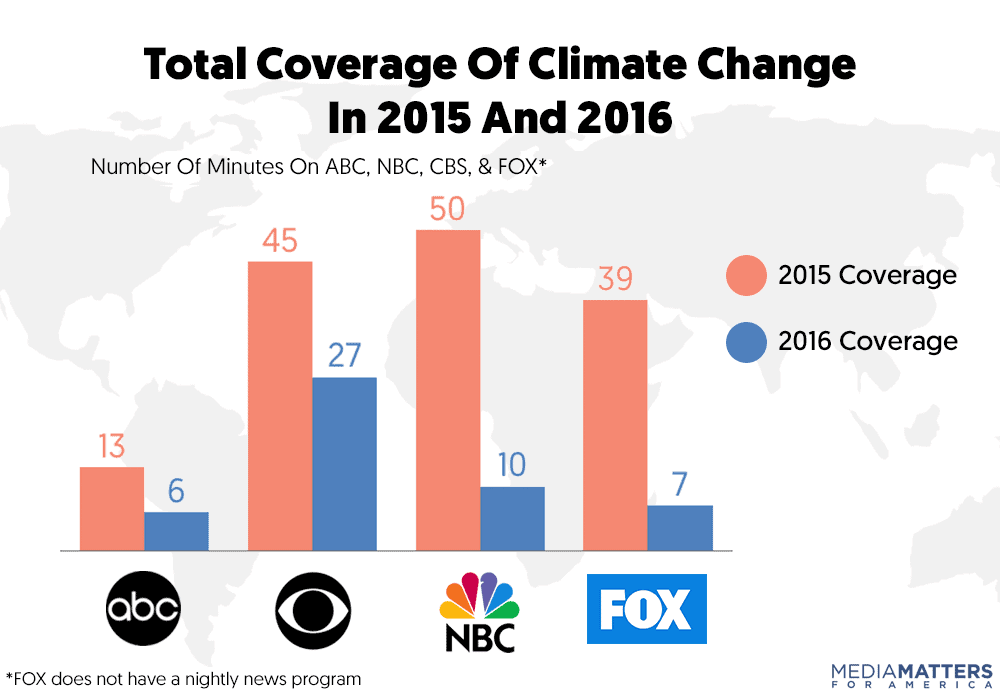 All US major broadcast networks have drastically reduced their climate change coverage even though it was already very sparse to begin with. As you can see, however, some broadcasters are worse than others, i.e. Fox and ABC. All they could care about was the election and Donald Trump. Even so, ABC, CBS, NBC, and Fox News Sunday did not air a single segment informing viewers of what to expect on climate change and climate-related policies or issues under a Trump or Clinton administration.

“While these outlets did devote a significant amount of coverage to Trump’s presidency, airing 25 segments informing viewers about the ramifications or actions of a Trump administration as they relate to climate change, all of these segments aired after the election. Examples of post-election coverage include a PBS NewsHour segment about Trump’s selection of Scott Pruitt to head the Environmental Protection Agency (EPA) and Pruitt’s history of climate denial and ties to the fossil fuel industry; a CBS Evening News segment about Trump appointing climate denier Myron Ebell to his EPA transition team; and an NBC Nightly News report on Trump’s promise to roll back President Barack Obama’s executive actions on climate change,” Media Matters reports. 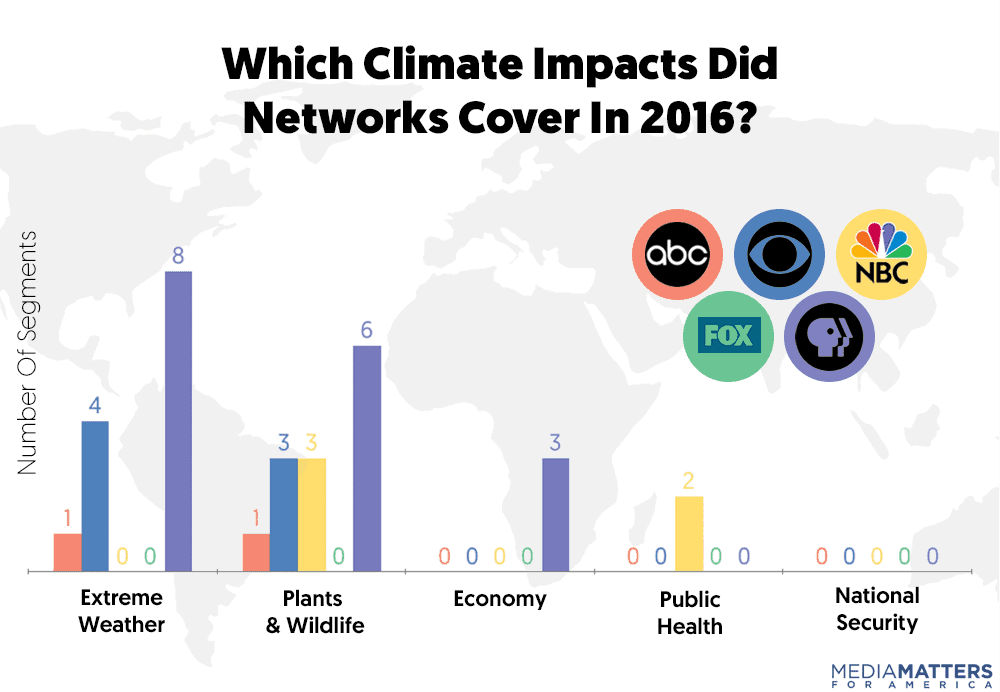 To get an idea of how biased mainstream media in the United States is, it’s enough to look at the pack once PBC is included in the mix. PBS single handily ran a total of 21 segments about the Paris Climate Agreement & UN Climate Summits, compared to only 13 segments which were aired by the four main broadcasters included in the report. The highly controversial US Clean Power Plan, which by definition should have deserved some air time, was covered by PBS in 7 segments but only six times across the other networks.

All of these networks — ABC, CBS, NBC, and Fox News Sunday — love controversy and scandals. They prey on it to earn viewership but guess what, two of the year’s biggest scandals saw little to no coverage. I’m talking about the Rock Sioux protest against the construction of the Dakota Access pipeline in 2016, which only Fox covered once in a climate context since oil infrastructure would have added to global warming. The famous ‘Exxon Knew’ story that made waves on the internet and which exposed the fact that Exxon’s own scientists had confirmed by the early 1980s that fossil fuel pollution was causing climate change was not covered at all by any of the four major US broadcast networks.

You know what the best part is? Out of all those glorious 50 minutes, some of the time was reserved for blatant climate denialism. That’s not surprising given the current track record which dubiously alludes to one-sidedness (totally against the scientific consensus I might add) or when you consider these networks rarely or never feature a scientist in their climate coverage.

It looks like a total media blackout for climate change events, but who ordered it? And when these networks choose to talk about climate change, the hosts either have no idea what they’re talking about or, worse, are simply following orders meant to discredit climate research or polarize the discussion. You know, make it sound as if the jury isn’t out yet about climate change, that matters aren’t clear yet or, hilariously, that this is a partisan, political, red vs blue kind of thing, which is totally ludicrous and nefarious if intentional.