If the current trend is maintained, then China’s emissions will continue to drop, a new study concludes — but the dust is not yet settled. 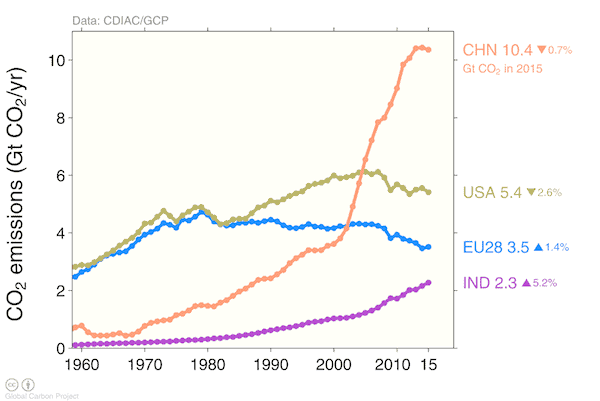 As the world’s biggest polluter, China certainly has a lot to account for. Also the world’s most populous country, China has enjoyed a massive economic surge, but that surge was built on polluting fossil fuels — especially coal — so its economic success came at a cost.

China has also become one of the most polluted countries in the world, with many of its major cities battling smog and abysmal air quality. However, in recent years, things have started to change for the better.

For starters, China has slowed down its economic growth, which made it much easier to reduce emissions. This doesn’t really really mean much by itself, as it means that a potential renewed economic impetus would also bring about more emissions. In addition, China has invested massively into renewable energy and implemented ambitious eco-friendly policies. Is this enough to ensure a continuous reduction in emissions, or is it simply a fluke?

Prof. Dabo Guan and Dr. Jing Meng from University of East Anglia ’s Schools of International Development and Environmental Sciences and their colleagues wanted to see what we can expect from China in the future.

“As the world’s top emitting and manufacturing nation, this reversal is cause for cautious optimism among those seeking to stabilise the Earth’s climate,” said Prof Guan, professor of climate change economics. “Now, the important question is whether the decline in Chinese emissions will persist.

Similar to previous studies, they found that although China’s emissions are still quite volatile and can rise or drop significantly in the short run, the decrease seems to be stable for the long run.

There also seems to be a trend of decoupling emissions from economic rise — which means that even if China’s economy accelerates again, emissions will not rise accordingly (they would still rise, just not as much). This also suggests that China is shifting from a heavily industrial economy to a more service-based developed economy.

“We conclude that the decline of Chinese emissions is structural and is likely to be sustained if the growing industrial and energy system transitions continue. Government policies are also a sign that the decline in China’s emissions will carry on,” Guan comments. Furthermore, we can expect China to play a more pivotal role on the global scene

“In response to the US withdrawal from the Paris Agreement, China has increasingly assumed a leadership role in climate change mitigation, and its five-year progress reports under the agreement will be heavily scrutinised by the rest of the world.”

Direct policies also played an important role. For instance, a recent Chinese policy directive to cap coal at four billion metric tonnes per year requires its proportion in the energy mix to decrease from 64% in 2015 to around 58% by 2020. Furthermore, China also plans to introduce a nationwide emissions trading scheme by the end of the year.

So there are reasons for optimism, but it should still be a cautious optimism. Dr. Meng said:

“Both emissions and their underlying drivers will need to be carefully monitored, but the fact that China’s emissions have decreased for several years – and more importantly the reasons why – give hope for further decreases going forward.”