In the past decade, ice extent at the two poles couldn’t be more different. The Arctic has seen its 13 smallest maximum ice extents in the last 13 years, and since 1979 it lost 620,000 square miles of winter sea ice cover, an area more than twice the size of Texas. Meanwhile, in Antarctica, ice cover has actually increased despite warming trends. A new study suggests Antartica’s topology and the depth of the ocean surrounding it form a “great shield” of old, thick ice that protects new, thinner ice towards the mainland. 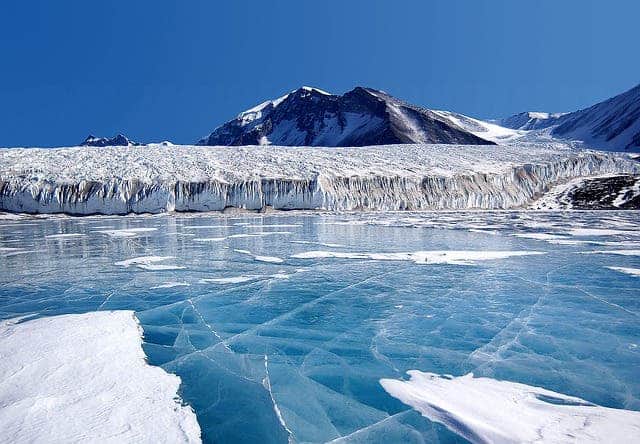 Every year, the Antarctic reaches its maximum ice cover in September, and its lowest in the summer month of February when it measures only 17 percent of its winter ice cover. Despite accelerated warming, the two maximums and minimums have remained relatively stable, with a slight overall increase in ice cover in the last three years, despite regional differences.

This has boggled many researchers. Why is the Arctic in such a poor shape, while Antarctic ice is stable? A number of explanations have been attempted, from the ozone hole that was plugged last decade, to an increase in Antarctic winds, to freshwater making the Antarctic waters less salty. Neither, alone or in combination, proved to be very convincing.

The data analyzed by Nghiem and colleagues, however, seems to point to a more logical conclusion. Under the mountains of ice, it’s Antarctica’s unique topography that’s been protecting the continent from warming trends.

NASA’s QuikScat satellite tracked not only Antarctic ice movement between 1999 to 2009, but also mapped the different types of ice. For instance, radar signals can differentiate between thicker, older ice and thinner, younger ice.

The team found that during the growing season, offshore winds guided by the continent’s topography pushed newly formed ice northwards. The ice then stacks until it becomes thick and rough. In doing so, a great shield of ice is formed around the continent, varying in width from 62 to 620 miles, which protects the thinner ice behind it from wind and wave erosion.

When the team combined sea surface temperature records with the newly available  bathymetric chart of the depth of the world’s oceans, the NASA researchers found the ice shield’s boundary formed at a -1 degree Celsius temperature line surrounding the continent. This boundary separates the warm and cold water fronts. That wasn’t surprising anymore after the researchers learned a deep channel called  Fawn Trough is funneling the current in tight formation in the East. In the West, the sea floor is deep and smooth. Here the grip over the current is lost, so sea ice extent can decrease a lot, explaining the big seasonal differences between East and West Antarctic ice.

Location of the southern Antarctic Circumpolar Current front (white contour), with -1 degree Celsius sea surface temperature lines (black contours) on Sept. 22 each year from 2002-2009, plotted against a chart of the depth of the Southern Ocean around Antarctica. The white cross is Bouvet Island. Credit: NASA/JPL-Caltech

“Our study provides strong evidence that the behaviour of Antarctic sea ice is entirely consistent with the geophysical characteristics found in the southern polar region, which differ sharply from those present in the Arctic,” said lead researcher Son Nghiem of NASA’s Jet Propulsion Laboratory, Pasadena, California.

The fact that Antarctica has a natural shield protecting it is definitely good news.  Antarctica is covered by an ice sheet almost a mile thick that holds about 200 feet equivalent of sea level. You definitely don’t want this to collapse. More research is required to understand how the shield’s boundary will evolve with time, moving and shifting with temperature gradients and the winds.