Thousands upon thousands of Pacific walrus were captured by photographer Gary Braasch as they came ashore on the northwest coast of Alaska last week, in an event believed to be triggered by global warming.

According to the U.S. Geological Survey, walruses prefer to haul out on sea ice, rather than on land. But, researchers say that the loss of sea ice, brought on by ever increasing temperatures in the area, forced the walruses to haul out for rest on land.

Hauling out on land could put young walrus calves at risk of being trampled, and it could be difficult for the marine mammals to find sufficient food close to shore, scientists say.

No ice to chill on

The photographs were taken near Point Lay in Alaska on Aug. 23. 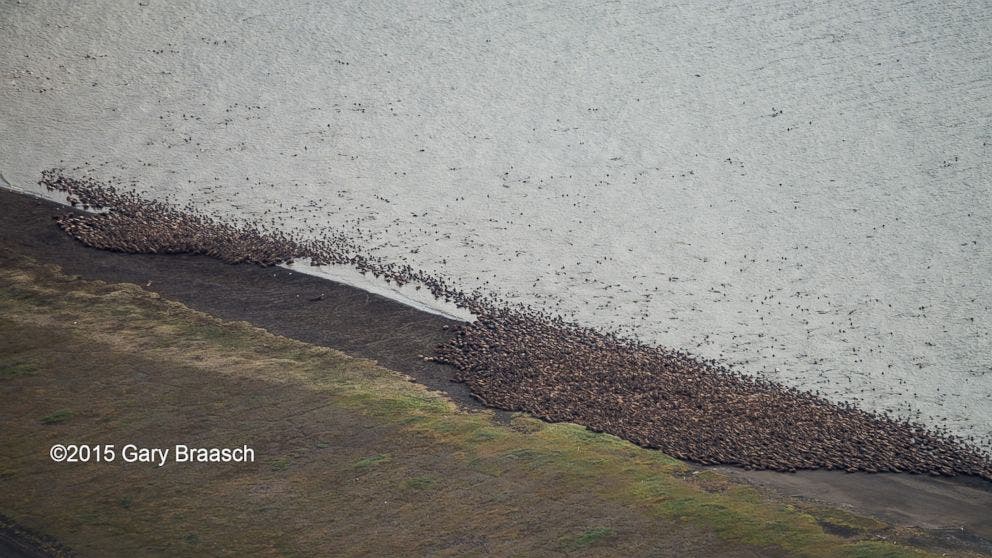 Aerial photographs made by Gary Braasch on Aug. 23, 2015 show thousands of Pacific walrus coming ashore near Point Lay in Alaska. 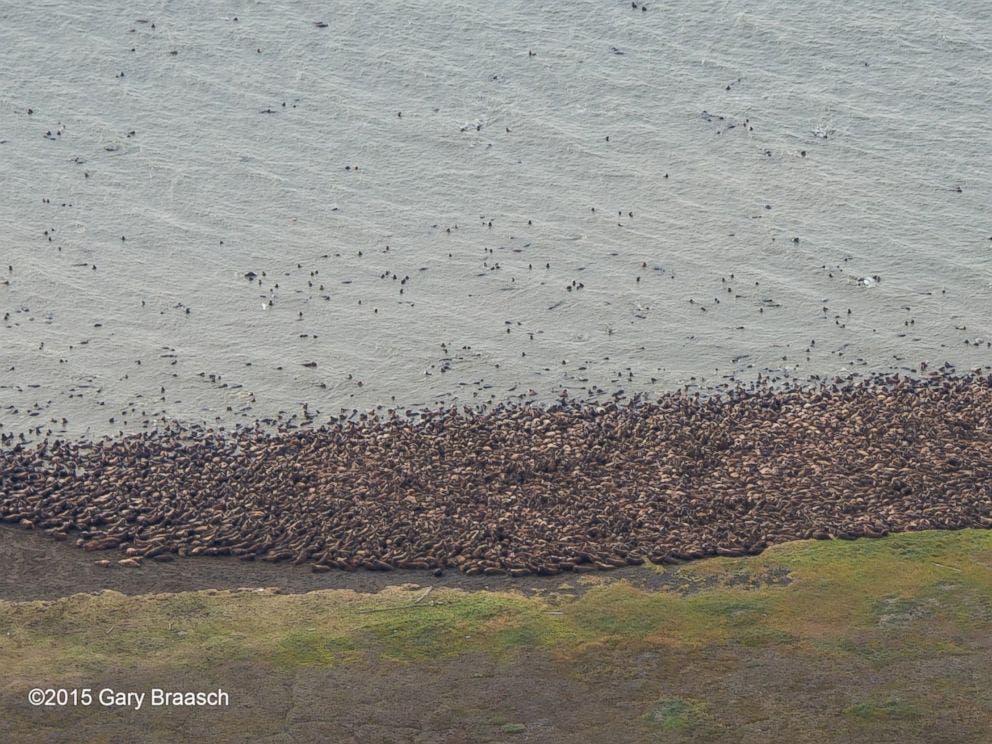 For about eight years now, more and more walrus have been coming to shore on the coast of Alaska. Estimates put last year’s number of walrus on shore to a staggering 35,000. Right now, there are an estimated 5,000-6,000 walruses on shore near Point Lay, a largely Native village in northwestern Alaska.

These photos were taken just one week before President Obama’s scheduled visit to Alaska on Monday, where he is expected to urge more action to fight global warming.

Walruses live a pretty simple and straightforward life: they wake up, find something tasty to eat, then hang around on a piece of ice to socialize and mate. They prefer shallow waters as they can’t swim for long and according U.S. Geological Survey that’s exactly what draws them to this part of the ocean:

“Most of the world’s ocean is 10,000 feet deep. Beneath the Chuchki Sea is an immense continental shelf that is only 150 feet deep. This vast shallow sea is extremely rich in the clams and worms so vital to the walrus.”

Rising temperatures are pushing the ice further and further north, into the deeper water, earlier each year, leading to these massive haul-outs.

But it’s no picnic on land either

Haul-outs of such proportions put the walruses at constant threat of human disturbance. Stressors such as planes flying by, shipping or just an amateur photographer can incite a violent response in the males, triggering stampedes that put the calves at risk of injury or death

Haul-outs of this size also put walruses at constant threat of human disturbance. Ships, planes, and even jerks with cameras can trigger stampedes that put calves at risk of injury or death.

This is why officials released a statement instructing media, tourists, and even locals to maintain their distance from the thousands of walruses crowding the shores.

The walrus is an important part of native Alaskans’ culture. They count on the walrus for food, clothing, boat building, tools, art, and a lot more. But rapid ice melt in the region, says the USGS, could create even more barriers to recovery:

“This longer season of open water has created the potential for greater human presence. Now, there is more opportunity for trans-ocean shipping, fishing, offshore oil and gas development, and tourism. Walrus and their calves must now contend with increased human presence, just as the security of their summer sea ice disappears.”

The U.S. Fish and Wildlife Service thinks the walrus should be classified as a threatened species under the Endangered Species Act. But a decision won’t be made until 2017, once researchers have done their digging. Hopefully, they won’t be too late.

Check out this video put together by the U.S. Geological Survey to learn more about the walrus, it’s importance and the threat it’s facing.