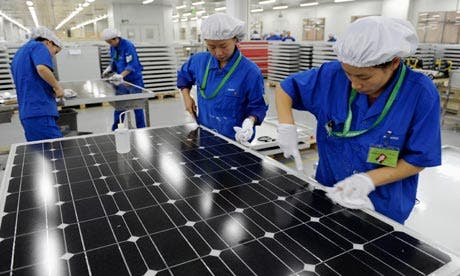 The largest fossil fuel burning country in the world, China, has recently announced plans of extending its solar energy generating capacity to 35 gigawatts by 2015. While it’s far from shadowing the immense amounts of greenhouse gases the country is currently generating (china coal use is expected to increase even further as the country becomes ever more industrialized, extending towards the mainland), the move has been hailed with great enthusiasm by environmental conscious groups. This is only the most recent in other exciting news we’ve been receiving about China’s strategy of transitioning towards renewables.

An ever great enthusiasm, apparently, has been expressed in the stock exchange, after both Xinyu-based LDK Solar Co. (LDK) and Wuxi-based Suntech Power Holdings Co. rose more than 19 percent in New York trading. This recent massive demand will also help stabilize the solar panel market which is currently facing a problem of oversupply. Last year a 20 percent plunge in the average price of solar panels was witnessed, according to data compiled by Bloomberg

“This confirms previous expectations that the Chinese government would solidify a significantly higher target than previously for 2015,” said Jenny Chase, a solar analyst at Bloomberg New Energy Finance.

“An average of 10GW annually seems entirely achievable. However, we expect 2013 to be slightly lower, with 6GW to 9GW, depending on when their premium for electricity generation from rooftop systems is finalised.”

China has the world’s third-biggest installed capacity of solar power, with 8.3GW of solar photovoltaic capacity at the end of 2012, an 8 per cent share of global capacity according to industry figures. Germany is the leader with 32.4GW, nearly a third of worldwide capacity. Italy is second with 16.3GW while the US has 7.7GW.