Arctic sea ice contains ‘record levels’ of microplastics, with concentrations two to three times higher than any recorded in the past. 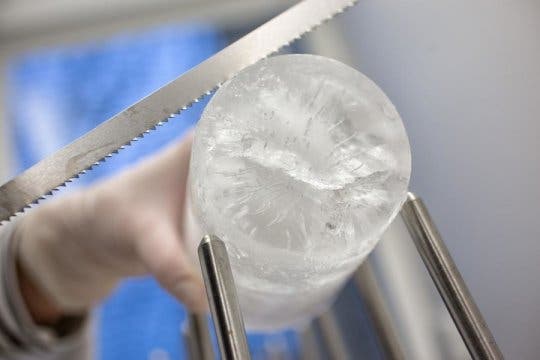 One of the Arctic sea-ice cores being prepared for a microplastic analysis in a lab.
Image credits Tristan Vankann / Alfred-Wegener-Institut.

Ice cores recovered from across the Arctic Ocean tell a chilling tale — the concentrations of plastic trapped in the ice are two to three times higher than any we’ve ever seen before.

Plastic on the rocks

Microplastics are, perhaps unsurprisingly, tiny pieces of plastic. We use the term to refer to bits under five millimeters in length. They’re generally the result of the gradual breakdown process of larger pieces of plastic waste, but a large number of microplastics reaches the oceans directly from health and beauty products, in water from the washing of synthetic textiles, or from car tire abrasion. All in all, the team found 17 different types of microplastics in the ice, including polyethylene and polypropylene (used in packaging), but also paints, nylon, polyester, and cellulose acetate (used to make cigarette filters).

The problem is that once this ice melts, the plastic will be released into the ocean, ultimately finding its way into the bellies or gills of wild animals. Over half the particles the team found in the ice were small enough to be ingested by sea life, notes lead researcher Ilka Peeken of the Alfred Wegener Institute, Helmholtz Centre for Polar and Marine Research in Bremerhaven, Germany.

“No one can say for certain how harmful these tiny plastic particles are for marine life, or ultimately also for human beings,” she adds.

The team gathered ice cores from five regions across the Arctic Ocean in 2014 and 2015. Microplastics were found in every single core, suggesting that the pollutants are ubiquitous in surface ocean waters, at least in the Arctic.

These samples were taken back to the lab for analysis to determine their origin. The team reports that the waste’s “plastic fingerprint” points to the huge patch of garbage in the Pacific Ocean as the main source. The rest of the microplastics seem to originate from local pollution, most notably from fishing and shipping.

Some of the particles they found were very tiny indeed. The team reports finding microplastics that were as tiny as 11 micrometers across — roughly one-sixth of the diameter of a human hair.

“[The small dimensions] also explains why we found concentrations of over 12,000 particles per litre of sea ice – which is two to three times higher than what we’d found in past measurements,” said co-researcher Gunnar Gerdts, also from the Alfred Wegener Institute.

With climate change turbo-charging the rates at which Arctic sea ice melts, more and more of these plastic microparticles will be released into the ocean.

The paper “Arctic sea ice is an important temporal sink and means of transport for microplastic” has been published in the journal Nature Communications.