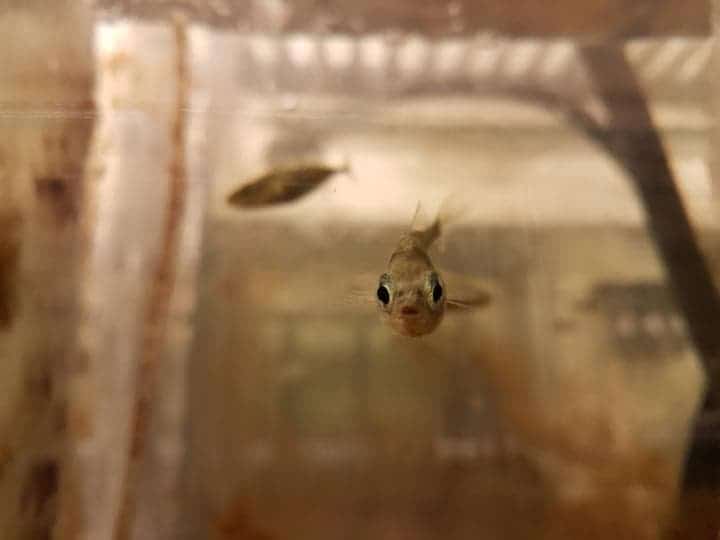 Pictured: one of Mary’s offspring in the aquarium at School of Life Sciences, University of Nottingham. Credit: Laura Dean.

Stickleback fish (Gasterosteus aculeatus) make babies without having sex. Like most other fish, the female lays unfertilized eggs which the males later fertilize with sperm in the nest. But somehow, one such female got pregnant and produced offspring through an emergency C-section. The female, aptly named Mary, shows that evolution is fluid and that nature doesn’t always play by the rules.

“We were astounded at what we found when we examined Mary in our lab in the Outer Hebrides. She looked like an ordinary egg-bound fish so we couldn’t believe it when we found she had almost completely developed embryos inside her ovaries. This is pretty much unheard of in an egg laying species. The embryos were perfectly healthy, not deformed in any way, and most have gone on to live a normal adult lifespan,” Dr. Laura Dean, a researcher at the University of Nottingham and lead author of the new study, said.

This isn’t the first time that scientists have come across developing embryos inside unfertilized egg-laying fish. Previously, only two such cases were known to science and both also involved stickleback fish. This most recent case is even more striking because this time, the embryos survived and many of the pups grew into adults that are still alive today.

Researchers found Mary while surveying egg-bound sticklebacks in Scotland — and she wasn’t in great shape. She was swollen with her young and very close to dying. Researchers euthanized Mary with drugs and then opened her up to extract the eggs. A total of 56 eggs hatched and survived to adulthood inside a laboratory aquarium. Twenty of these individuals are still alive today, three years later, the authors wrote in the journal Scientific Reports.

Stickleback males don’t just contribute sperm. They have an active parenting role, helping eggs develop by fanning them with their fins for two weeks until they hatch. But it seems like the environment inside Mary was good enough to ensure healthy embryo development.

“Although this almost accidental find revealed a vanishingly rare phenomenon, it might help us to understand a really important change that has happened throughout the tree of life,” Andrew MacColl, an evolutionary biologist at the University of Nottingham in England, said in a statement. “Most animals lay eggs, but some (including almost all mammals, but few fish) retain their eggs inside and give birth to live young. Although this appears to be a difficult thing to achieve in evolution, this one little fish seems to have got there almost by itself.”

As to how Mary got pregnant in the first place, that’s a mystery that might never be solved. Researchers thought that perhaps Mary had cloned herself or that maybe she was a hermaphrodite with both male and female sex organs. However, the authors ruled these two possibilities out since genetic testing showed that the offspring had versions of genes that could only have come from a father.

What probably happened is that Mary strayed by a nest where a male had just recently ejected sperm to fertilize normal eggs. Some of that sperm must have traveled up Mary’s egg tube, fertilizing some of the un-laid eggs inside her.

Researchers are now planning to go the site where they found Mary, hoping the catch similar specimens. Some fish, such as guppies pupfish, are livebearers and this ability may have evolved independently. In this regard, Mary may offer researchers with a glimpse of how such an evolutionary leap might occur.