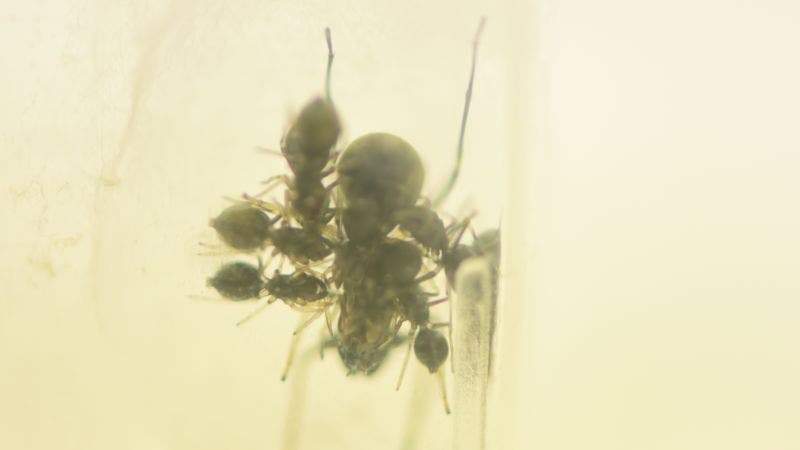 One summer evening, Chinese researchers were minding their own business in their lab in Yunnan, China, when they came across a peculiar sight. Inside a nest, they saw a juvenile jumping spider attached to its mother like a baby mammal sucking milk from a mamma’s teat. Strikingly, investigations showed that the young spiders really were sucking milk — spider milk! It’s the first time that milk production has been reported in arachnids or any invertebrate, for that matter. It’s very nutritious, too. Researchers reported that the jumping spider’s milk contains 4 times the protein, fat, and sugar typically found in cow’s milk.

The one-of-a-kind findings could help researchers piece together the evolutionary origins of very complex parental care, such as mammalian nursing. Given that we’re talking about a jumping spider (Toxeus magnus), a long-standing hypothesis that prolonged mothering requires complex brain power could be turned on its head.

What’s remarkable is not only the fact that a spider can produce milk but also how long it provides it to its young. Once the female spider’s eggs hatch, the mother deposits milky droplets around the nest, which the babies sip gladly for a couple of days. After the droplets are exhausted, the young spiders line up at the mother’s birth canal to suckle more milk. At the ripe old age of 20 days, the young start to hunt outside the nest, but they will still consume their mother’s milk until they become sexually mature, another 20 days later. Other spider species may hang around their young a couple of days after they hatch, but they never feed them.

When the researchers cut off the juveniles’ milk supply by painting the mother’s birth canal, all spiders younger than 20 days died. When the mother was removed from the nest, older spiders that were still being nursed grew slower, left the nest sooner, and were more likely to die before reaching adulthood, as reported in the journal Science.

The milk-like secretion could actually be liquefied eggs, wrote the authors of the new study, who work at the Chinese Academy of Sciences’ Center for Integrative Conservation in Menglunzhen. Previously, researchers have described other non-mammals producing milk-like substances, such as pigeons or cockroaches. However, a cockroach’s milk-like secretion is absorbed passively through the eggshell of the embryos and is not part of the hatchlings’ diet.

Extended maternal care was thought to be a behavior evolved by only a couple of long-lived social vertebrates, such as humans or elephants. However, the new study shows that invertebrates have also evolved this ability.  The study’s authors do not explain why the spiders nurse their young for so long or why other species of spiders do not produce milk. Nevertheless, the findings provide a reminder that spiders aren’t necessarily cold and harsh creatures.