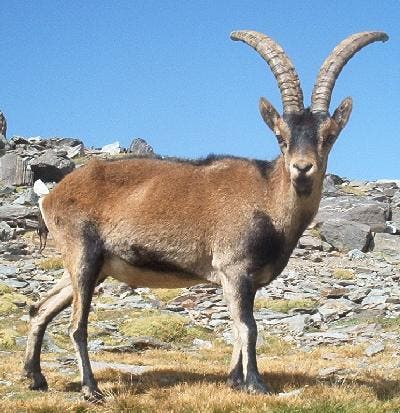 Almost 10 years ago, on July 30, 2003, a team of Spanish and French scientists reversed time. They brought an animal back from extinction, if only just to see it go extinct again. The animal they revived was a kind of wild goat known as a bucardo, or Pyrenean ibex. For tens of thousands of years, the animal thrived in the Pyrenees, the mountain range that divides France from Spain, where it clambered along cliffs, eating whatever plants and roots it could, enduring harsh winter after harsh winter. Then the humans came – with their guns. Hunting season after hunting season, their numbers dwindled down, and in 1989, just 12 individuals remained. 10 years from that, a single female was left, and not long afterwards, the bucardos became officially extinct.

Over the next few years a team of reproductive physiologists led by José Folch injected nuclei from those cells into goat eggs emptied of their own DNA, then implanted the eggs in surrogate mothers. From the 57 implantations, only 7 animals became pregnant. Out of those 7 pregnancies, 6 ended in miscarriage; one of them however, was brought to term – but only for 10 minutes. A huge lobe in its lung prevented it from actually breathing; there was nothing anyone could do, and the bucardos became extinct – once more.

The idea of bringing back species through cloning has hovered on the border of reality and science fiction for a few decades now, but are we really at that time when we actually bring them back?

“We are at that moment,” sayd Fernández-Arias, now the head of the government of Aragon’s Hunting, Fishing and Wetlands department.

The term is definitely lacking, but for the lack of a better one, we’ll keep using it. At a TEDx conference in Washington DC sponsored by National Geographic, scientists met to discuss which animals should be brought back from extinction. They discussed the why, the how, and perhaps most important, the ethics behind this kind of project.

The thing is, the list of recently-gone extinct animals (because of human activity) is really large (7 animals recently gone extinct), so even if all the scientific methods are available, we have to choose wisely where we have to invest time and resources. Are the species practical choices – do they provide any advantage to the environment? Do they hold an important ecological function, or are they beloved by humans? It’s a pretty tricky area, especially considering how the environment has changed.

In fact, this is a very puzzling issue; even if we say, manage to bring back a species, its environment would be different; the ecological niche it once filled is almost certainly gone by now. Migration patterns have changed, food sources have changed, temperatures have changed, and in a way, even if it is a perfect physical clone, the species will not be the same.

The passenger pigeon is a perfect example of how destructive humans can be. In the mid 1850, some 3.5 – 5 BILLION passenger pigeons existed. They went extinct in under 50 years, due to habitat loss and meat consumption.

This giant, flightless Elephant bird was found only on the island of Madagascar and died out by the 17th century.

The Aurochs is often seen as a mythical animal – but it was very much real. It is the ancestor of domestic cattle and lived throughout Europe, Asia, and North Africa. They died off in 1627.

The Caribbean monk seal was hunted to extinction for use as oil, and they were out-competed for fish.

The much loved, much feared, and overall iconic Saber-toothed cat, Smilodon, is also on the list. It died out about 10,000 years ago due to climate changes at the end of the last Ice Age.

The Carolina Parakeet was the only parrot species native to the eastern United States. Out of all things, one of the main reasons why it went extinct is because of the demand for its colorful feathers to decorate ladies’ hats.

This extinct species of plains Zebra, the Quagga, once lived in South Africa. The last wild one was shot in 1870 and the last in captivity died in 1883.

The common misbelief about Dodo birds is that they are really dumb – but that’s hardly true. The thing is, they evolved without any natural enemy – so when humans arrived to their home island of Mauritius, they took advantage of this and ate them to extinction.

The Huia was a large species of New Zealand wattlebird. It went extinct in the 20th century because of hunting to make specimens for museums and private collectors.

Another victim from New Zealand: Moa were a giant flightless bird hunted to extinction by the Maori at approximately 1400.

The Mastodon is an extinct species related to elephants that lived in North and Central America.

Frozen carcasses of the Woolly Mammoth allow scientists access to well-preserved DNA from these prehistoric giant animals, related to elephants. Apparently, one isolated population of mammoths lived on Wrangel Island in the Arctic Ocean until 4000 years ago.

The Great Auk went extinct in the mid-19th century.

The Imperial Woodpecker may actually still be alive, but not a single one has been seen for over 50 years, and its entire habitat (in Mexico) has been destroyed.

The Ivory-billed Woodpecker lived in “virgin forests” of the southeastern United states, but there are no longer any virgin forests in that area, and again, a live specimen hasn’t been seen for over 50 years.

The Heath Hen lived in coastal North America up until 1932. They made for delicious dinners, and were likely the foundation of the Pilgrims’ first Thanksgiving. Apparently, they were too delicious for their own good.

The Labrador Duck was always rare but disappeared between 1850 and 1870. Reports claim it didn’t taste good, but was hunted just for the sake of hunting.

This cute little guy is the Dusky Seaside Sparrow, which was found in Southern Florida. It was officially declared extinct in 1990 after humans started spraying the insecticide DDT on its habitat to kill off mosquitoes.

The Moho are a genus of extinct birds from Hawaii. Most of them died out because of habitat loss and hunting.

The Pyrenean ibex lived in Southern France and the Northern Pyrenees.

This beautiful bird is the Cuban Macaw. It lived in Cuba and was the last species of Caribbean macaw to go extinct, due to deforestation from human settlement.

The Thylacine, or Tasmanian Tiger, is the only marsupial to make the list. It lived in Australia, Tasmania and New Guinea until the 1960s. Intensive hunting encouraged by bounties is generally blamed for its extinction.

3 thoughts on “Scientists want to ‘de-extinct’ 22 species, including the wooly mammoth, the Dodo bird and the tasmanian tiger”