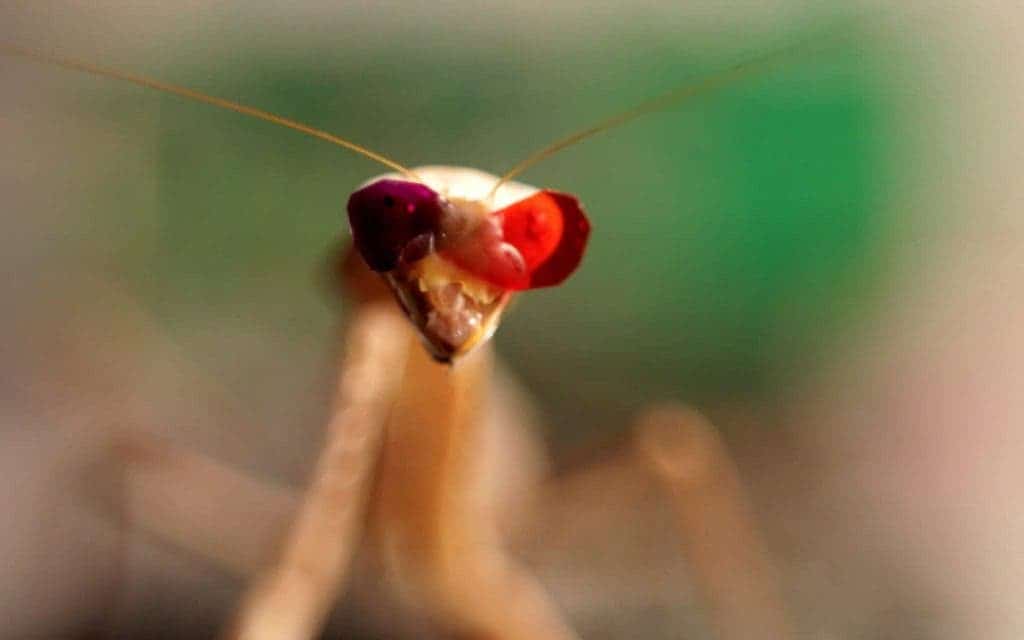 Each of our two eyes sees the world slightly differently but luckily our brain has evolved a way to combine the two pictures into a single image. The difference in details between the two is what allows us to estimate how far away things are or to estimate depth, which is why it’s also called 3D vision. Besides humans, there are many other animals which use stereo vision, such as cats, mules, toads, and the praying mantis. The latter is actually the only insect that has stereo vision and, what’s more, the researchers at Newcastle University discovered that it is a new kind of stereo vision that thus far appears to be unique to the mantis.

To investigate how the praying mantis 3D vision works and differs from our own, the British researchers devised special, tiny 3D glasses that were temporarily glued to the heads of mantises with beeswax. They then introduced the insect into — where else — a 3D cinema.

Basically, the researchers played a movie of tasty prey hovering right in front of the mantis — an illusion so realistic that the mantises tried to catch it with their famous claws. The movies shown to the insects were both simple movies of bugs as well as complex dot-patterns typically used by doctors to investigate human 3D vision.

We, as humans, are very good at seeing in 3D, as far as still images are concerned, because we match up the details of the picture produced by each of our two eyes. Mantises only attack moving prey, and so their 3D vision works fundamentally different. After various trial runs, the Newcastle researchers found that the bugs don’t bother at all about the details of a picture and instead look for the places where the picture is changing, such as moving prey over a background.

The mantis stereo vision is very robust because even if the insect’s two eyes produced completely different images, they would still be able to identify the places where things are changing. Indeed, in tests, the mantises could do this in cases where humans couldn’t.

“This is a completely new form of 3D vision as it is based on change over time instead of static images,” said behavioral ecologist Dr. Vivek Nityananda at Newcastle University.  “In mantises, it is probably designed to answer the question ‘is there prey at the right distance for me to catch?’”

The most immediate applications involve robots. Today, robots that use stereo vision to navigate their surroundings do so analogously to humans. For all intents and purposes, this works out nicely but the main drawback is that our form of stereo vision requires a lot of computer processing.

If the next generation of robots uses mantis stereo vision algorithms —  based on change over time instead of static images — they will use far less processing power. This means you can have autonomous robots that are far smaller and last much longer on a battery than ever before.