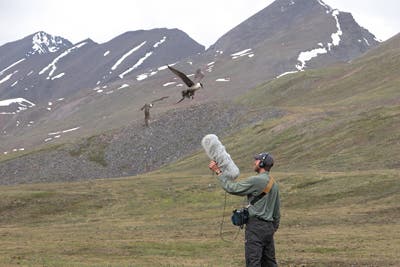 Gerrit Vyn is a multimedia producer at Cornell’s Lab of Ornithology. Here he is recording natural sounds in Alaska. Image: Mike Anderson

Researchers at Cornell University’s Lab of Ornithology have, for the past century or so, recorded, collected and compiled the most extensive animal sounds library in the world. Called the Macaulay Library, it features 150,000 recordings of 9,000 species, including three-quarters of all known birds to science. Besides chirps and squeaks, you’ll also find bear roars, primate calls, and blue whale songs. Now, Cornell reports the whole library was finally digitized and all the database put online for free use.

“This is one of the greatest research and conservation resources at the Cornell Lab,” said Greg Budney, the collection’s currator. “And through its digitization we’ve swung the doors open on it in a way that wasn’t possible 10 or 20 years ago.”

“Our audio collection is the largest and the oldest in the world,” explained Macaulay Library director Mike Webster. “Now, it’s also the most accessible. We’re working to improve search functions and create tools people can use to collect recordings and upload them directly to the archive. Our goal is to make the Macaulay Library as useful as possible for the broadest audience possible.”

Some highlights from the archive:

2 thoughts on “Largest animal sounds library: now free to use”