Deep in the Amazonian lowlands, biologists stumbled across a peculiar glass frog species completely new to science. What makes glass frogs so interesting, unique even, is their chest which varies in different levels of transparency. This trait is so pronounced in some individuals that you can see their beating hearts straight through the limpid chest. Unfortunately, the new species called Hyalinobatrachium yaku may already be threatened with extinction by oil exploitations in the area. 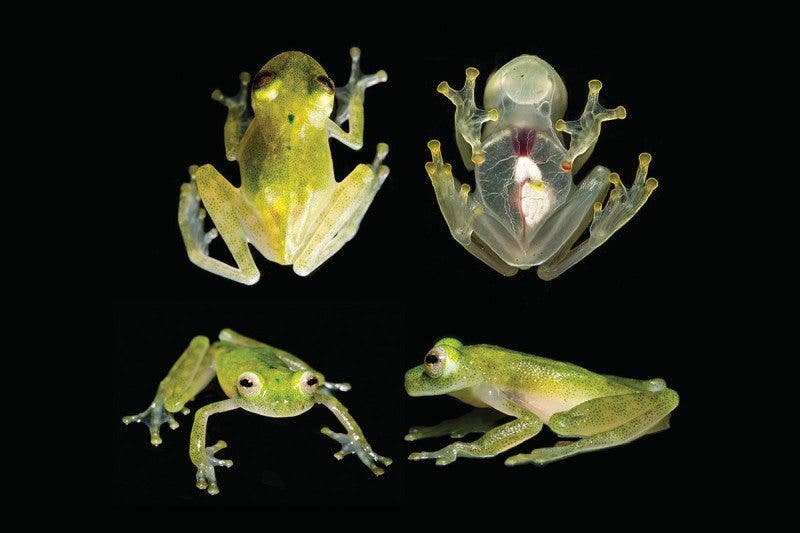 Glass frog or “see-through frog” is a unique type of frog that is named that way because of its translucent skin. These usually live in Central and South America, preferring tropical rainforests where they rest high in the treetops right above the water. These unique amphibians are usually tiny, typically 0.78 inches long, though some can reach 3 inches in length.

The body of the frog is usually bright green or olive green in color, and it’s the belly that’s covered in transparent skin. Liver, heart, and intestines can be seen when the glass frog is looked from the underneath.

Glass frogs are arboreal animals, meaning they spend most of their lives in trees and will come to the ground only during the mating season which takes place right after the rainy season. Females lay 20 to 30 eggs on the underside of leaves that hang right above the water. Males, on the other hand, guard the eggs until these are ready to hatch and fall on the below water stream. The males are also very protective of their mates’ eggs and will watch them 24/7. Nothing will sway the males from their jobs and no intrududer is intimidating enough for them. Some males have even been known to kick away wasps that get too close to the egg cluster!

More than 60 different species of glass frogs are known to science, the latest being Hyalinobatrachium yaku which was identified as unique by researchers at the Universidad San Francisco de Quito, in Ecuador. The team led by biologist Juan Guayasamin performed DNA sequencing on samples taken from the glass frog and found the genome didn’t match other species. They also found that the dark green spots on its back, its call, and reproductive behavior were different from other known frogs. 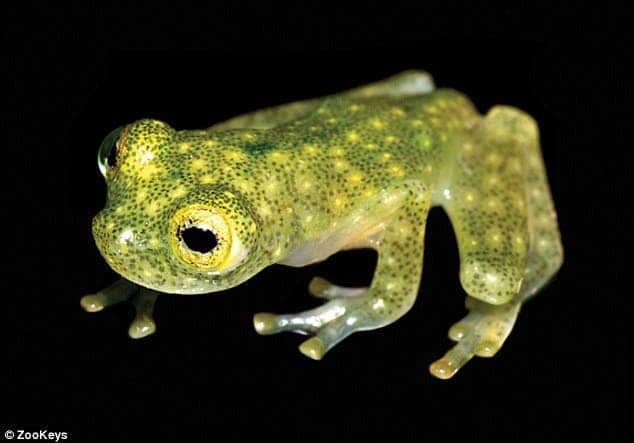 A juvenile H. yaku, stands out with its dark green spots and atypical reproductive behaviours.

‘All species in this genus have a completely transparent ventral peritoneum, which means that organs are fully visible in ventral view,’ researchers explain in a new paper, published to ZooKeys.

‘The reproductive behaviour is also unusual, with males calling from the underside of leaves and providing parental care to egg clutches.’

Nobody’s sure why the see-through skin appeared in glass frogs but the discovery of H. yaku might help shed light in the matter. The more members scientists can draw on a family tree, the easier it becomes to identify out evolutionary traits and mechanisms.

All in all, Hyalinobatrachium yaku looks like a fine addition to the 100 to 200 of so new amphibian species discovered each year — far more than new birds or mammals. However, this joy might be short-lived. Like other glass frogs, this amphibian needs pristine streams to breed but these are beginning to dry up or get polluted from nearby oil wells.

“For example, even though a high proportion of the Ecuadorian Amazon is already concessioned to several extractive activities, the Government of Ecuador is planning to intensify oil extraction in the region,” the researchers wrote.

“Aside from obvious concerns such as water pollution, extraction of natural resources increased the level of regional road development, which could threaten populations of H. yaku.”