Sharks are amazing animals, and they have been swimming the oceans for about 450 or 425 millions of years now. To put that into perspective, dinosaurs appeared some 230 million years ago, then largely died off. The first hominids (not actual humans, but human-like animals) date from around 4.5 million years ago. So sharks evolved some 200 million years before dinosaurs, and they’re still here — they’ve been around for 3 times as long as dinosaurs, and 100 times as long as hominids. Modern humans, who date back roughly 60,000 years, can’t even hold a candle to the sharks’ history.

And they’ve spent all that time becoming the best, most oiled killing machines you can imagine. Case in point: Carcharodon megalodon. 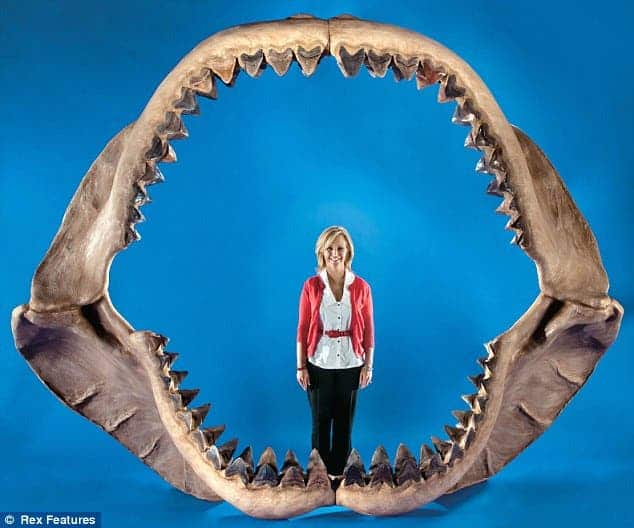 C. megalodon is an extinct species of shark that lived from the early Miocene to the end of the Pliocene, between 23 to 2.6 million years ago. And it was HUGE. While the exact length they could grow to is still a matter of debate, it’s generally agreed based on fossil records that the animal averaged around 18 meters (59 feet) in length, and most likely looked like a stocky great white shark. Unfortunately, just like sharks today, megalodon was mostly built on cartilage, which usually decomposes before it has a chance to fossilize. What we did find is its jaws, however, and these are truly impressive.

For as long as it lived, it’s hard to imagine that C. megalodon had any natural predators — it’s the largest carnivorous fish to have ever lived, and it likely was the ultimate killer on the planet while it lived. It actively hunted whales and was so successful at it that researchers now believe its extinction is the only thing that allowed whales to grow as large as we see them today.

One thing is certain, though. I’m glad I’ll never have to come face to face with one.