Do you still think that fish don’t feel pain? That we shouldn’t really care how we catch or treat them? If so, then you’re terribly wrong. In a new article published in Springer’s journal Animal Cognition, Associate Professor Culum Brown from Macquarie University concludes that not only do fish feel pain and are conscious of it, but they can also multi task, and exhibit cultural behaviour. 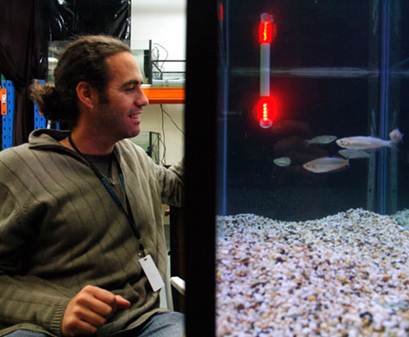 Brown says that most people think of fish as food, or at best, pets. Not much is put in the way of fish cruelty, even though they are second only to mice in terms of the numbers used in scientific research, and the more than 32,000 known species of fish far outweigh the diversity of all other vertebrates combined. Basically, people chose to think that fish simply aren’t smart enough to consciously feel pain, and therefore should be protected from cruelty.

“Fish are one of the most highly utilised vertebrate taxa by humans; they are harvested from wild stocks as part of global fishing industries, grown under intensive aquaculture conditions, are the most common pet and are widely used for scientific research. But fish are seldom afforded the same level of compassion or welfare as warm-blooded vertebrates.”, the study reads.

His research focused especially on bony fish, and showed that fish are, in fact, far more intelligent than previously believed; contrary to the cliche, they have quite good memory, live in complex social communities where they keep track of individuals, and can learn from one another. They even develop cultural traditions, use tools, and in many ways behave similar to primates – except for the fact that they don’t imitate.

This raises serious problems; basically, at the moment, there is no protection against cruelty for fish – and this has to change. The level of mental complexity fish display is on a par with most other vertebrates, and just because an animal isn’t cute and fluffy or you can’t pet it doesn’t mean we should protect it any less.

“The implications for affording the same level of protection to fish as other vertebrates are great, not least because of fishing-related industries.”

But will the fishing industry actually start doing something about this? That’s highly doubtful. They don’t seem interested even by the hugely diminished fish stocks in the global oceans, so they probably won’t stumble on a bit of ethics and animal cruelty.

2 thoughts on “Not only do fish feel pain, but they also multi task and even have cultural traditions”