New Caledonian crows are quite possibly the smartest birds out there. Their most impressive intellectual feat is their uncanny tool-making ability. Now, a new study shows that the crows are capable of fashioning tools from memory, which was thought to be impossible to do for a bird. 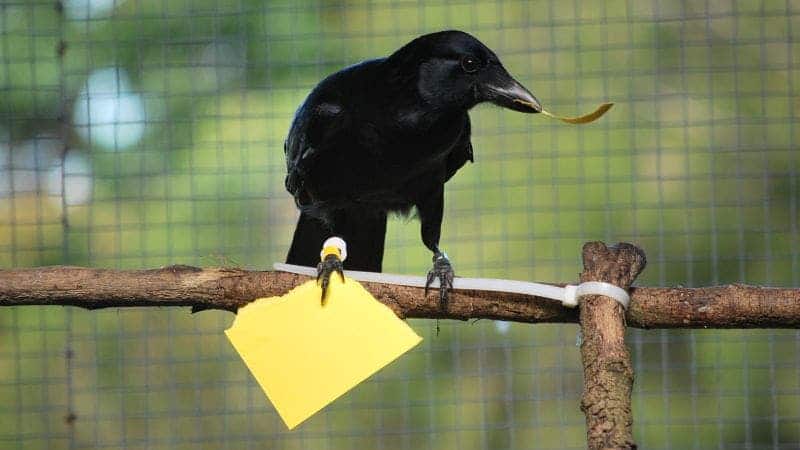 New Caledonian crow that made a paper card from scratch in order to receive a reward. Credit: Sarah Jelbert

Corvids, the cosmopolitan family of oscine passerine birds that numbers crows, ravens, and rooks, are really smart. They play ahead, remember human faces, and solve puzzles.

New Caledonian crows — which live on the remote tropical island of New Caledonia in the South Pacific — are known for using twigs to stir beetle grubs and other small prey out of hiding places. They’re able to do just fine with straight twigs, but sometimes, they fashion hooked twigs — all using just their beaks and feet.

In another mind-boggling example, researchers have witnessed not one, but two crows inserting sticks into objects to carry both at once. Some of these objects were too cumbersome to carry by beak alone, which is telling of the birds’ ingenuity.

But among all of these achievements, one study published in 2002 documented a behavior that has been puzzling scientists ever science. In the study, the authors followed a captive New Caledonian crow called Betty thatt took a piece of wire, bent it into a hook, then retrieved some food otherwise out of reach. Betty used the wire after another crow had taken all the available hooks.

All of this made Alex Taylor, a researcher at the University of Auckland in New Zealand, very curious. How were these birds learning such a sophisticated behavior? The New Caledonian crows’ behavior suggested that the birds were using a sort of “mental template matching,” forming a mental picture of the tool-making process they’d seen in another bird, then copying it. This is also how humans learn new skills, through cultural transmission.

“Under the mental template matching hypothesis, New Caledonian crow tool designs could be passed on to subsequent generations if an individual used or observed the products of tool manufacture (such as their parents’ tools), formed a mental template of this type of tool design (a mental representation of some or all of the tool’s properties), and then reproduced this template in their own manufacture,” the authors of the new study wrote.

Taylor and colleagues devised an experiment to test their hypothesis, involving eight crows that were trained to drop bits of paper into a vending machine. The New Caledonian crows learned that they would be rewarded with food only when they introduced cards of a specific size, either large ones measuring 40 x 60 mm or small cards measuring 15 x 25 mm.

After this initial round of training, all the pieces of papers were taken away and replaced with a single large sheet of paper that couldn’t fit into the vending machine. The scientists then watched with their jaws dropping how the birds tore up the large piece of paper to fashion smaller pieces that matched the sizes that would earn them a reward. According to Taylor and colleagues, this is an example of “manufacturing by subtraction.”

This suggests that the crows formed a mental image of the desired object, which they then materialize into a new tool, the authors reported in Scientific Reports. Now, the researchers think that crows might also possess the ability to improve tools over time, something which they hope to test soon.