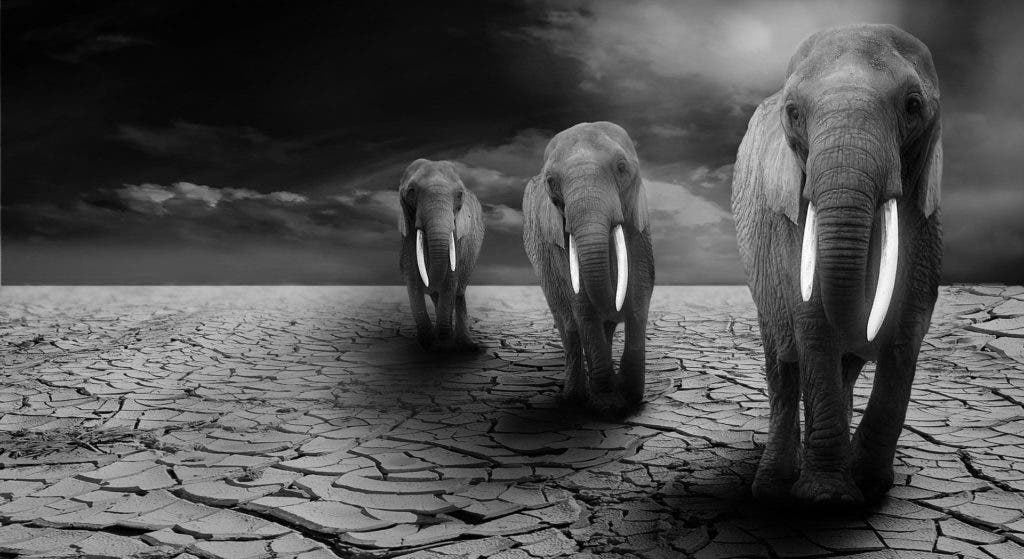 The overwhelming majority of seized ivory from Africa comes from elephants killed in the past three years. The stark findings were reported by scientists who used radiocarbon dating on samples from 230 elephant ivory specimens seized as part of 14 different operations from 2002 through 2014.

The last couple of years saw a dramatic surge in traded ivory on the black markets, most of it destined to Asian markets. Elephant populations in the African savanna have plummeted by 30 percent from 2007 to 2014; that’s tens of thousands of elephants murdered every year.

We can tell how many elephants get killed thanks to modern surveillance measures and algorithms that extrapolate data. Using helicopters and cameras, conservationists and local authorities scour the savanna and count elephants one by one. Today, only 352,271 are still alive in the 15 African countries that they surveyed, down from over one million in 1970.

It’s never been very clear, however, if seized ivory comes from elephants killed further back in the past or more recently. Some have gone as far as suggesting African authorities are collaborating with criminal gangs by releasing seized ivory held in government stockpiles into the black market. While this is horrific in itself, if true it would mean that the scale of poaching is not as drastic as ivory trading patterns suggest.

Thure Cerling, a professor at the University of Utah, and his colleagues, used radiocarbon dating to determine the age of seized ivory and test nefarious hypotheses like African officials being in cahoots with criminals. The method involves measuring the ratio between normal carbon (C-12) and its isotope (C-14). All livings things, be them plants or animals, have C-14 in their tissue and the previously mentioned ratio is the same at the moment of death as every other living thing. Because C-14 decays at a predictable rate with a half-life of 5,700 years, but C-12 remains constant, you can determine when an organism died fairly accurately. Using such a technique, scientists can determine how old an Egyptian mummy or fossil is, for instance.

Though they used ivory which was collected from various operations, only one sample was older than six years old, sourced from an elephant killed 19 years before being seized. However, nine-tenths of all the samples were no older than three years. One sample came from an elephant which was slain mere months before local authorities came into its possession.

“There’s been controversy for some time as to how to determine the killing rate of elephants,” says lead author Thure Cerling, a distinguished professor of geology, geophysics and biology at the University of Utah. “This shows that everything that has been seized comes from animals that died very, very recently.”

The findings published in the Proceedings of the National Academy of Sciences seems to clear doubts of widespread leaks from ivory stockpiles, though corruption can’t be ruled out entirely. That’s the good news. The bad news is that poaching is indeed as bad as many have feared. More action is needed unless we want to live in a world where elephants can only be safe in zoos — maybe not even there.

Securing ivory can be tough, though. The international ivory ban came into force around 1990, but ivory sourced before the ban can be legally traded anywhere in the world. So, if a trader sources ivory from recently dead elephants he can pretend it’s actually ancient history. But the work of Cerling and colleagues might prompt these dubious characters to think twice before they commit to such claims.

If all traders who supposedly sale legal ivory were mandated to have their goods tested, the fight against poaching might come a long way. Even then, however, the logistical challenges might make such an initiative ineffective.

The best thing for elephants right now is to impose a global ban on all ivory, old or new, and impose severe penalties for those who sell or buy.