Flash back to 1960. At that point in time the best definition of a human was a being with the ability to make tools. Man the tool-maker was considered to be different from animals in this regard. Dr. Jane Goodall was observing chimpanzees at Gombe National Park in Tanzania and saw two chimps strip the leaves off of small twigs and use them as tools to “fish” termites out of the ground to eat. This was the first time a non-human had ever been seen to create a tool and use it to accomplish a task. In response to the shocking news, Jane’s mentor Dr. Louis Leakey famously proclaimed:

“Now we must redefine tool, redefine Man, or accept chimpanzees as humans.”

A bit dramatic perhaps, but now we’ve had to completely re-evaluate tool use because it’s actually a lot more common than we had thought originally. It is used in many different types of animals to obtain food and water, grooming, protection, and various other uses. 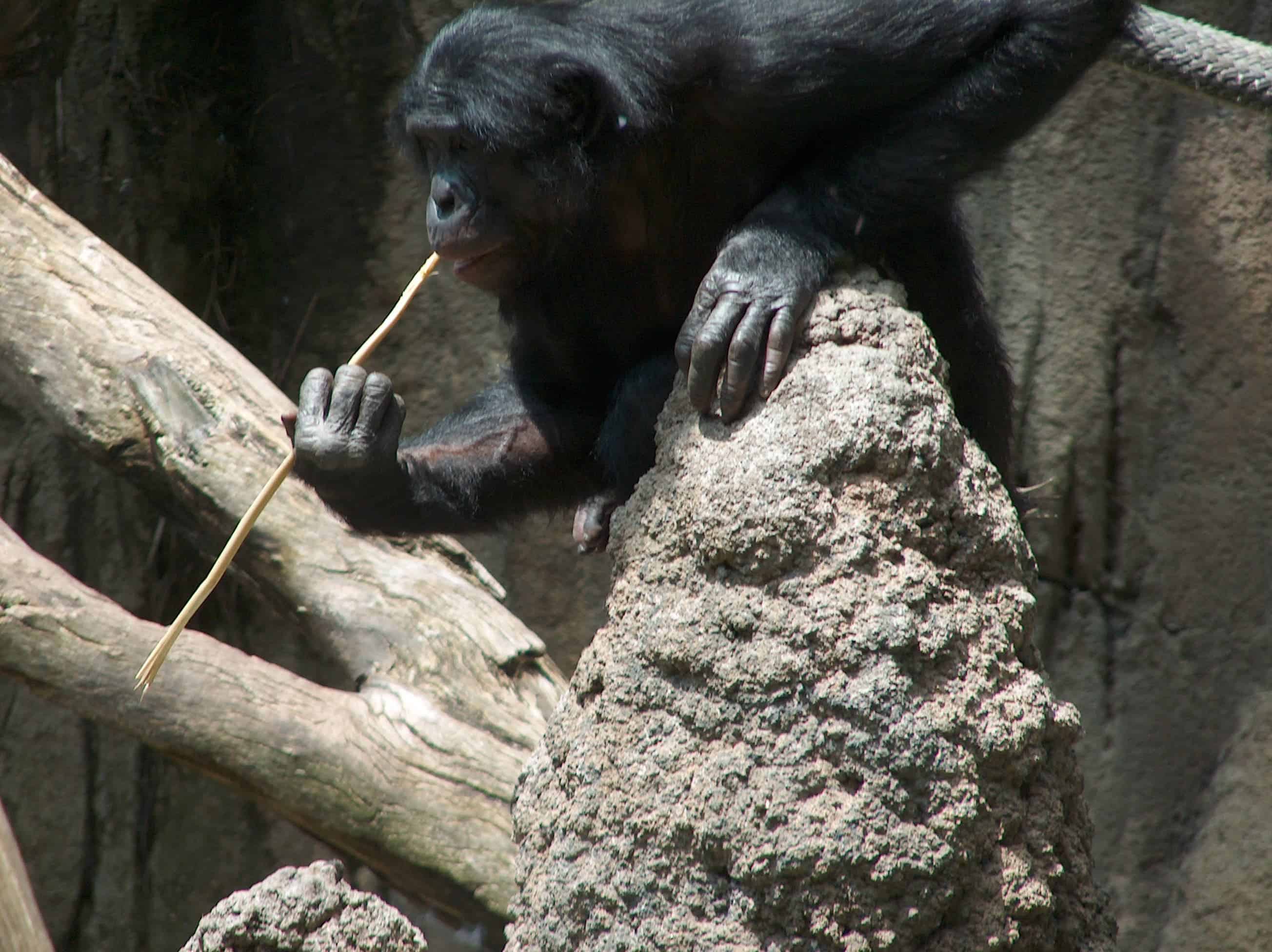 The most diverse and common tool use is to acquire food. Obtaining food is a primary need so these animals use inventive ways to obtain those hard-to-get food sources. Many food-obtaining tools are derived from sticks, but are used in so many ways!  For instance, chimps use sticks to smash fruit. Very rarely, some chimps have been seen to hunt bush babies with primitive spears that they thrust into the animal’s sleeping hollow. Some primates collect honey with sticks. Sumatran orang-utans alone use up to 54 types of tools for extracting insects or honey.

Crows, ravens, and rooks are also well known for using sticks to acquire food. In particular, New Caledonian crows create a specialized tool, a hooked stick, to probe for food in the cracks of trees and in leaf litter. Insects bite on to the stick; this technique is very similar to that of chimps. Some of the crows take such a shine to their tool that they carry it around with them. Similarly, Galapagos woodpecker finches use a cactus spine dynamically to goad out or spear insects. 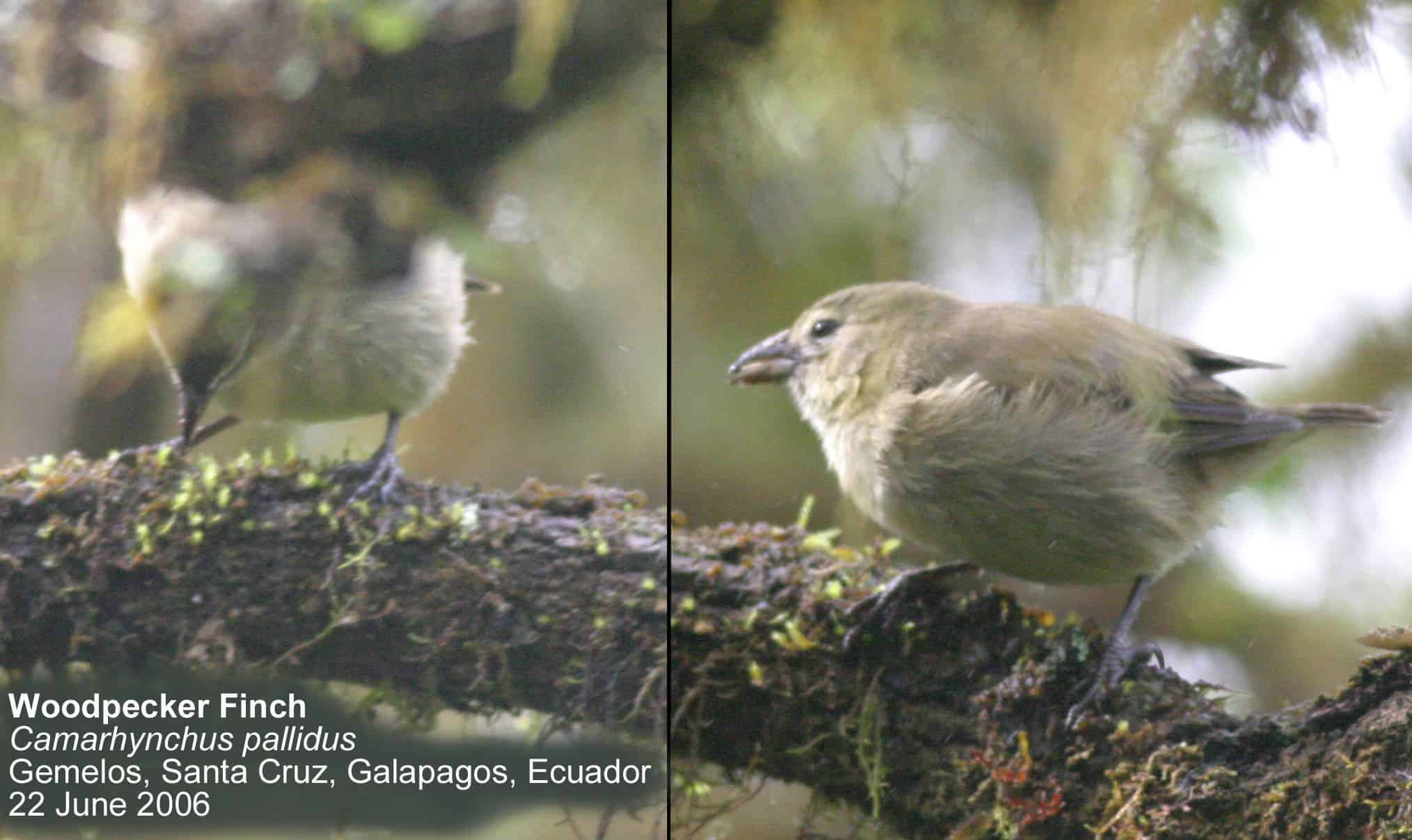 Even alligators have been seen to use sticks to attract prey, thought some scientists debate if it counts as true tool use. In spring, when birds like herons or egrets are gathering sticks for their nests, the alligators place sticks on their backs and submerge themselves in the water so just the sticks are exposed. They position themselves near the breeding birds and use sticks as bait. Birds that attempt to take the sticks may become their dinner.

Rocks are also found in nearly every habitat and are a common tool to break things open. In fact, primates are officially in the Stone Age with their use of stone tools. 4300-year-old chimpanzee stone tools have been found in the rain forests of the Ivory Coast. Chimps use rocks to smash fruits and hard shells. Bearded capuchins use stone tools to crack open nuts and dig for tubers, while long-tailed macaques use them to crack open shellfish. All of these primate groups likely developed the behaviour independently. Sea otters are another example of animals that use stones to crack open hard shells and to dislodge mollusks from rocks. 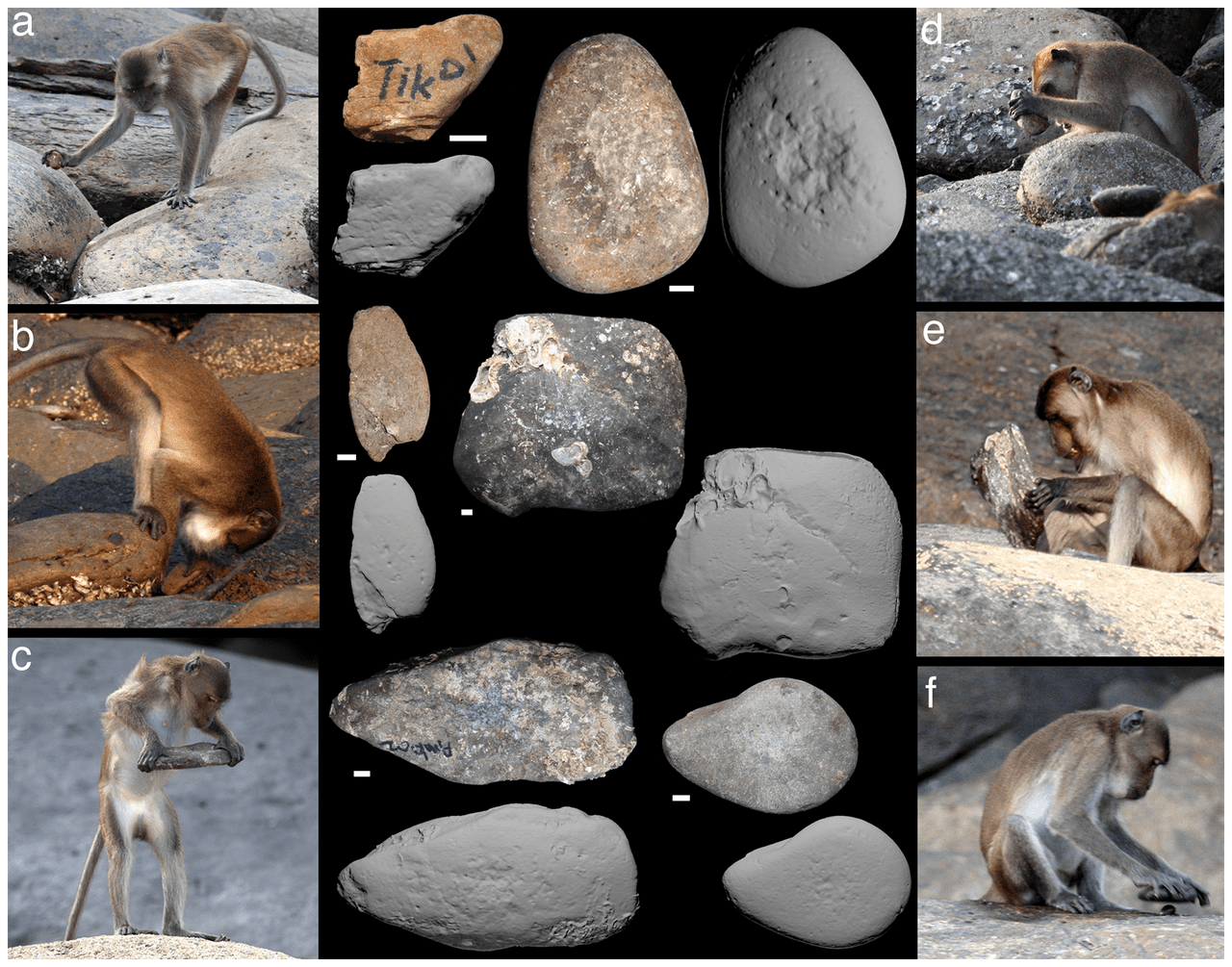 Another common tool between different animals is the sponge. Chimpanzees chew leaves and dip them into water so that act as a sponge that they can drink from. There are even some insects that make sponges surprisingly. Some ants like harvester ants soak sand, soil, or leaves in liquid food (like honey) or water to transport it back to the nest. Some bottlenose dolphins remove sponges from the sea floor and carry them in their beaks to sweep the sand and reveal prey. This behaviour is called “sponging” and particularly targets fish that bury in substrate. This could also be to protect the dolphin’s beak in reduced visibility.

Another area with a good deal of tool use is grooming. Some animals have tools and beauty routines to rival humans. Primates in particular participate in social grooming and use tools to aid in self and social grooming. Mandrills modify tools to clean their ears, I guess they haven’t gotten the memo that that’s a risk to ear health. Actually for them it clean their ears to help prevent ear infections. A male mandrill at Chester Zoo even whittled down a twig to scrape the dirt out from underneath his nails, giving himself a simple “pedicure”. 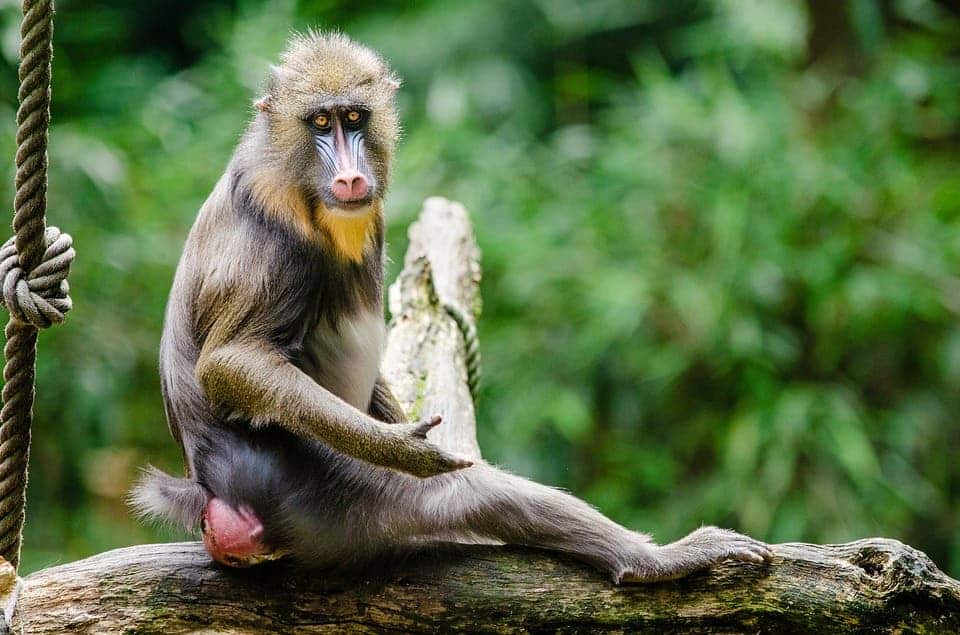 Crab-eating macaques near a Buddhist shrine in Lopburi, Thailand pull out strands of hair from visitors to floss their teeth with. Chimps use twigs to groom their teeth (like tooth-picks!) and noses. Orang-utans and chimps use leaves as napkins to wipe their faces. A captive capuchin monkey created tools to stroke and scrape the wound in her infant’s head to try to dislodge fractured pieces of skull. There are many more examples of grooming with tools in primates!

Tools can offer protection from predators, bad weather, and pests. Scientists were shocked when they saw the veined octopus collecting coconut halves to enclose itself in and protect itself from predatory cuttlefish. The octopuses even save piles of coconut shells for later when they need shelter. That requires a lot of foresight. This strategy is used in parts of the ocean where there is very little shelter. 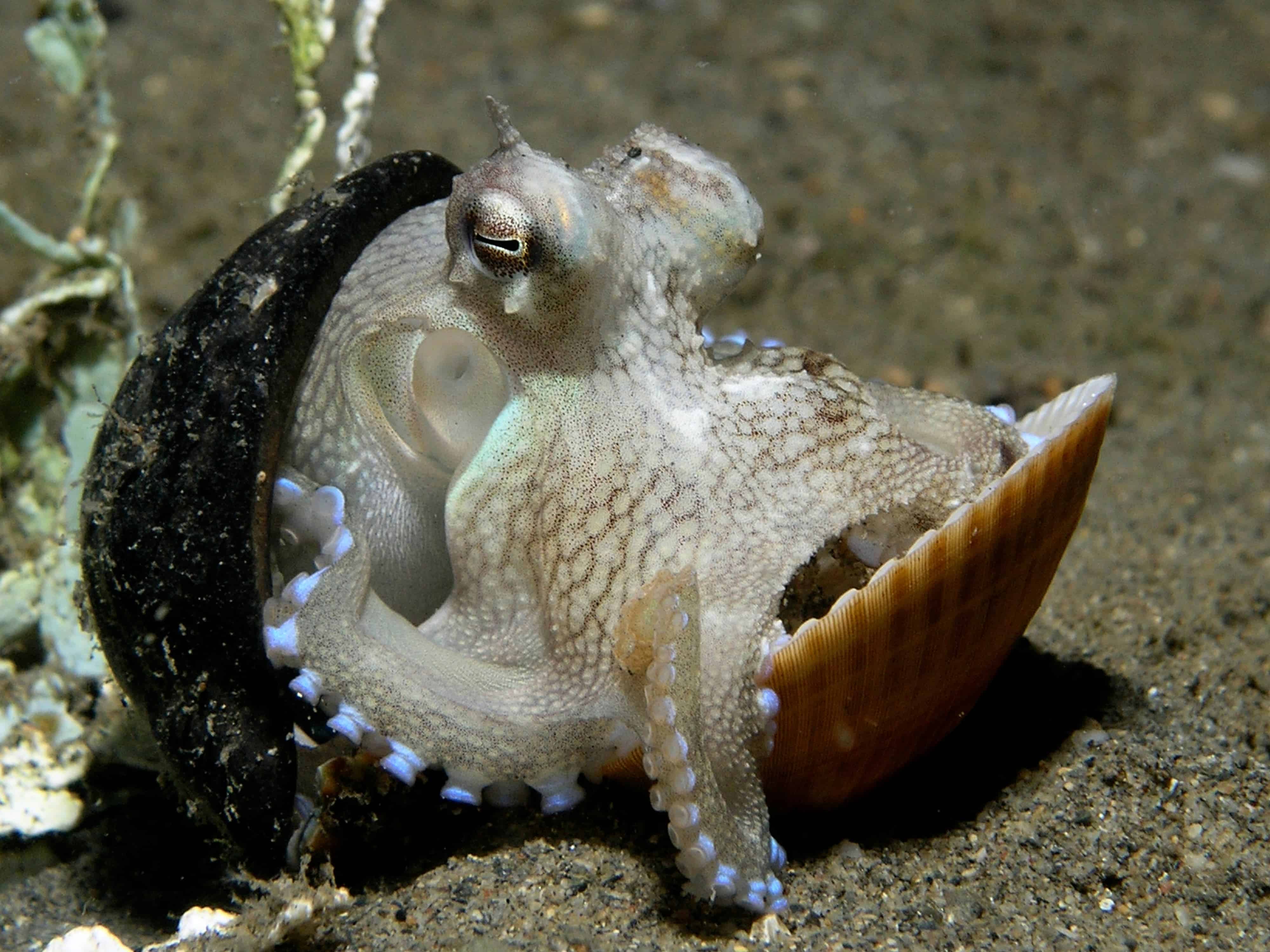 This veined octopus is protecting itself with a coconut shell and clam shell. Image credits: Nick Hobgood

Some nests are very elaborate, but using materials to make nests is not considered tool use. However the tailorbird really goes over the top. It takes a large live leaf still on the tree and punches little holes along the edges with its beak then it takes some thread (usually spider silk, cocoon silk or plant fibres) and sews it together so that it forms a pouch that the bird then builds its nest in. This pouch is created to camouflage the nest so that it is difficult to see. 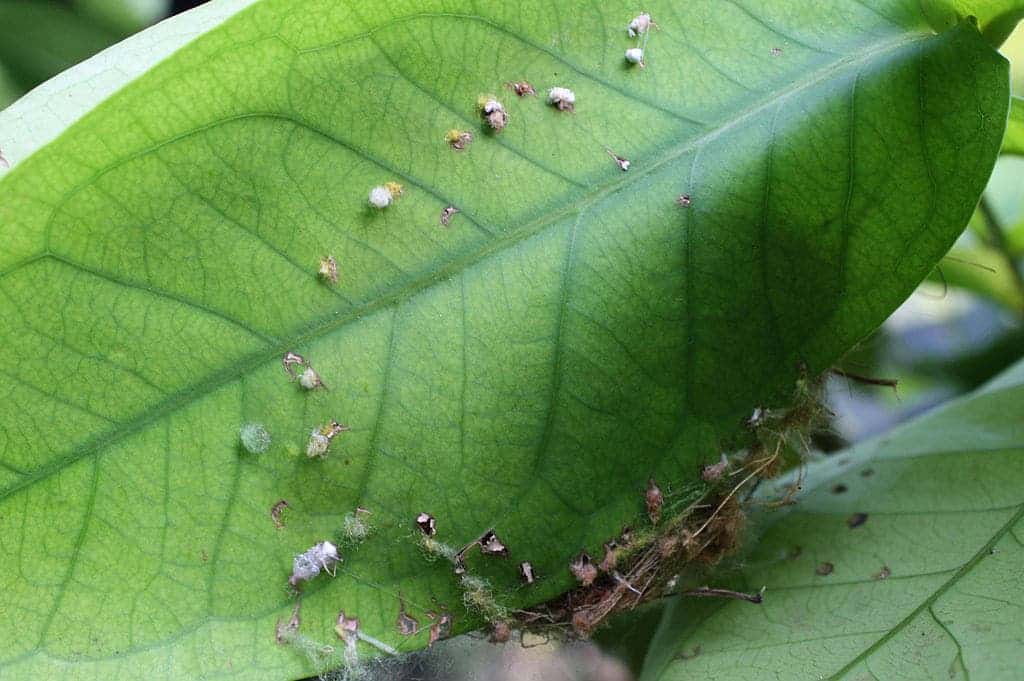 The “stitches” in the leaf made by the tailorbird to camouflage its nests. Image credits: Anton Croos

Orang-utans invented a whistle to warn off predators. They strip leaves off a sticks and put it to their lips while they produce a kiss squeak noise. The sound is made when the orang-utan is disturbed or threatened by a potential predator in an attempt to deter the predator. Smaller orang-utans usually produce the sounds so that they appear larger. The whistle makes the sound deeper. On Sumatra, some orang-utans use leaves as gloves or seat covers as protection against spiny or thorny trees and fruit. Wild bonobos hold up leaves as umbrellas.

Some tool just don’t fit in any of these categories. In 2005, a female gorilla was seen using a stick as she walked into a pool of water. She used the stick as a probe to judge how deep the water is and where was safe for her to walk.

Elephants are known for being very intelligent animals. They can manipulate their environment to their benefit. For example, they have been known to drop heavy objects on electric fences to disable them so that they can safely pass by. They also plug water holes with chewed bark or leaves so that it doesn’t evaporate and other animals can’t drink it. Asian elephants break sticks down into the best size for swatting at flies. As one last example of unexpected tool use, some male and female orang-utans have sex toys. They use a stick when they masturbate to target a particular area and to intensify the sensation.

Tool use is even more common in animals than we could possibly have imagined! It is very likely that there are even more that have not been discovered yet.

6 thoughts on “Which animals use tools?”